All Fiction Battles Wiki
Register
Don't have an account?
Sign In
Advertisement
in: RWBY, Female Characters, Characters,
and 24 more 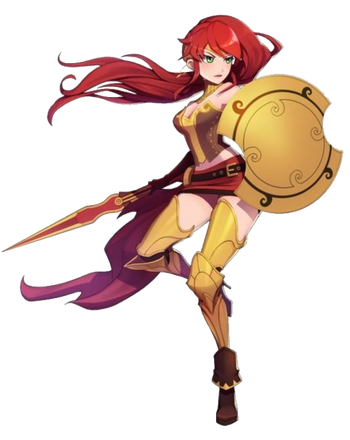 Pyrrha Nikos is a famous, level-headed, and highly-skilled student at Beacon Academy. Prior to her tenure at Beacon, she graduated from Sanctum Academy with highest honors and had a record number of wins at the Mistral Regional Tournament. More so, she is seen as a warrior who is seemingly untouchable to the point where she is believed to be "fated for victory", meaning she has never been defeated by any of her classmates, due to her semblance, which she hides from everyone except her friends.

Powers and Abilities: Superhuman Physical Characteristics, Regeneration (Mid-Low; aura can heal the user when they receive large wounds, leaving no scars), Aura (RWBY), Aura and limited Soul Manipulation (She manifests her soul in the form of life force to create a shield around her and it's directly connected to her life), Forcefield Creation (She has a shield around herself at all times), Statistics Amplification (She can increase her striking power with her aura), Enhanced Senses (Aura can enhance the users senses), Martial Arts (Type 3. She could match Mercury in hand to hand who's on par with Yang), Weapon Mastery (Type 1. She's skilled enough with her weapons to be able to fight 4 opponents at once and being able to switch between the types in the middle of the fight), Acrobatics (She's capable of using acrobatic movements to evade attack as well as mid air flips), Extrasensory Perception (She can sense the metal of weapons and can sense the attack because of it), Precognition (Type 1. She analyzes a person's fighting style being able to predict their movements and switching her style to match theirs), Magnetism Manipulation (Via Polarity, she can manipulate metal and even normally non-magnetic metals, she uses it in her fighting style to pull her weapons to herself or using it to make an opponent miss an attack), Genius Intelligence, Resistance to Heat Manipulation and limited Ice Manipulation (Aura protects the user from sub-zero temperatures, allowing them to walk through a blizzard in casual clothing or be encased in ice without being cold, as well as extreme heat up to and including the heat of flames, being blasted with steam, and being submerged in lava without being burned), limited Soul Manipulation (Aura can protect from aura enhanced physical attacks).

Attack Potency: Multi-City Block level (She's considered the strongest student at Beacon Academy, she could match Mercury and fight Cinder), possibly Town level (During her fight with a newly made Maiden Cinder, she was able to fight on par with her when she used her Maiden Powers, she was being infused with the Maiden Powers before Cinder killed Amber)

Speed: Hypersonic+ (She can move this fast and is superior to Team RWBY), possibly Massively Hypersonic+ (She could keep up with a newly made Maiden Cinder, she was being infused with the Maiden Powers before Cinder killed Amber)

Stamina: High (She could fight all of CDRI at once with no fatigue and is superior to Team RWBY)

Intelligence: Genius (Pyrrha is one of the most skilled students at Beacon Academy, being able to quickly and easily adapt to her combat situation and analyze her opponents while fighting and changing tactics to suit the situation, she's one of the smartest students at Beacon even considered smarter than Weiss, to the point where Weiss will go out of her way to try and get her to study with her)

Semblance: Polarity: Polarity is the ability to control magnetism, she does not need to come in contact with a metal object in order to manipulate it, and she can manipulate normally non-magnetic metals, such as aluminum.