All Fiction Battles Wiki
Register
Don't have an account?
Sign In
Advertisement
in: RWBY, Humans, Characters,
and 38 more 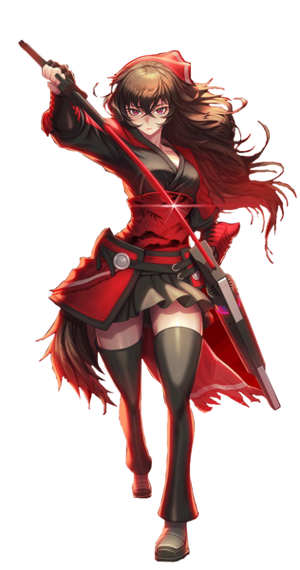 Raven Branwen is the mysterious mother of Yang Xiao Long and Qrow Branwen's twin sister. She was originally a member of Team STRQ, though unlike most Hunters, she has little issue killing and is described by her brother as a dangerous person. Raven has a high "survival of the fittest" mentality in which she is rather indifferent towards innocents dying if they were too weak to defend themselves.

Tier: 8-A, higher with Gravity Dust | Low 7-B with Maiden Powers

Superhuman Physical Characteristics, Regeneration (Mid-Low; aura can heal the user when they receive large wounds, leaving no scars), Aura (RWBY), Aura and limited Soul Manipulation (She manifests her soul in the form of life force to create a shield around her and it's direct connected to her life), Forcefield Creation (She has a shield around herself at all times), Statistics Amplification (Can use Aura to enhance her striking power), Enhanced Senses (Aura can enhance the users senses), Extrasensory Perception, Weapon Mastery (Type. 1, she is extremely skilled with her sword being able to match and beat Cinder, who was capable of beating Ozpin), Elemental Manipulation (Her sword uses blades made of Dust which grants her to use blades with different elements), Air Manipulation (Via Air Dust Blade), Ice Manipulation (Via Ice Dust Blade), Fire Manipulation (Via Fire Dust Blade), Water Manipulation (Via Water Dust Blade), Electricity Manipulation (Via Electric Dust Blade), Gravity Manipulation (Via Gravity Dust Blade), Paralysis Inducement (Via Electric Dust Blade, she can paralyze a target), Portal Creation (Via Kindred Link, which allows her to create portals in the vicinity of people she shares a bond with), BFR, Transformation (She can turn into her Madien Form), Shapeshifting (Can transform into a raven), Flight (She can fly as a raven), Resistance to Heat Manipulation and limited Ice Manipulation (Aura protects the user from sub-zero temperatures, allowing them to walk through a blizzard in casual clothing or be encased in ice without being cold, as well as extreme heat up to and including the heat of flames, being blasted with steam, and being submerged in lava without being burned), limited Soul Manipulation (Aura can protect from aura enhanced physical attacks).

Attack Potency: Multi-City Block level (She's superior to Oscar), higher with Gravity Dust | Small City level+ with Maiden Powers (She could create a storm at this level, can hurt and overpower Cinder and is superior to Autumn)

Durability: Multi-City Block level (She's superior to Oscar), higher with Aura | Small City level+ (She can take attacks from Cinder and is superior to Autumn)

Stamina: High (She's far greater than Team RWBY, who can fight for an entire day before becoming exhausted, she's capable of fighting Qrow and Cinder)

Intelligence: Gifted (Raven as a child, with no formal training was able to get into Beacon through sheer skill, which normally requires several years of training at a combat school to do so. She then went on to train directly under Ozpin and became skilled enough that he entrusted her and Qrow with their powers, as well as becoming a part of his inner circle. Afterwards, she continued training on her own and eventually came into her Maiden powers, and trained further, using them to the point that she was able to perform her storm feat with such control that no one knew she was doing it, despite her standing right in front of them, which even Mercury, who was able to determine Pyrrha's semblance, which she managed to keep hidden from the world for her entire life, in a few minutes, was fooled by Raven)