All Fiction Battles Wiki
Register
Don't have an account?
Sign In
Advertisement
in: Templates, Characters, Protagonists,
and 174 more

Lonely thirty-seven-year-old Satoru Mikami is stuck in a dead-end job, unhappy with his mundane life, but after dying at the hands of a robber, he awakens to a fresh start in a fantasy realm as a slime monster. As he acclimates to his goopy new existence, his exploits with the other monsters set off a chain of events that will change his new world forever.

Conceptual Manipulation (Type 2), Information Manipulation & Existence Erasure (Melt Slash and Disintegration completely annihilates everything from matter, souls, and information which make up everything in existence. Melt Slash can also destroy skills, such as Beelzebub. Dimension Storm releases a rainbow colored storm which will swallow and erase the existence of whatever it hits), Mind Manipulation (Can dominate the mind of those who seeks salvation and protection. Can manipulate people's minds as he likes), Disease Manipulation (Via Virus Manipulation), Instinctive Reactions (Via Insticnt Evasion), Forcefield Creation (Can create a barrier with Perceiver), Death Manipulation (Can kill targets just by looking at them), Soul Manipulation (Can destroy souls), Physics Manipulation (Can nullify his opponents' inertia, even if his opponent is faster than him, he can nullify their inertia, giving himself enough time to deflect their attacks), Subjective Reality (Paradise Time can pull the opponent's mind into his illusion world, while their body is in stopped time in the real world. In the user's illusion world, he has the ability to control the life and death of his opponent based on their mental strength. With “Inversion of truth and fallacy," he also has the ability to interchange reality and illusions, making whatever happens in the illusion world, become reality in the real world), Void Manipulation (Nihilistic Hazard creates a large magic formation on both the sky and the ground. And, like connecting those 2 magic formation together, innumerable spheres of dark electricity is released. It’s a dark magic that brings void to this world, and the void let loose to the world doesn’t vanish until it’s negative energy turns null. It will devour anything in its path and erase its existence), Damage Transferal (Can replicate the damage received into the opponent), Air Manipulation (Can decrease the surrounding oxygen to 0), Sleep Manipulation (Can put others to sleep), Biological Manipulation (Death Streak releases black lights which have a property of penetrating almost all kind of substances. It has the characteristic of not causing physical destruction. When the light penetrates a living creature, it affects the genetic arrangement. All living creatures are killed forcibly because of the forced genetic rewriting. Everything within a 10km is killed), Fear Manipulation, Madness Manipulation, Empathic Manipulation, Power Mimicry (Can copy his opponent's techniques), Clairvoyance (capable of observing anywhere in the world with the option to add sound as well too, and the information can be processed and turned into a video. Can also be used to locate isolated dimensions and teleport in and out of them), Causality Manipulation (Cook overwrites the very nature of an object itself, the skill allows the user to be able to obtain their desired effect and manipulate the very laws pf causality. For example, if used on a person and all their limbs were chopped off, healing magic will not work as the person was rewritten to have their limbless self be the new norm, in other words, they are already perfectly healthy. Another example of the use of this ability is attacks carried with its effect can't be blocked, it will change the effect from "the slash has been stopped by the shield" into "the shield could not stop the slash", hence the shield will not be able to stop the attack), Fate Manipulation (Can overwrite outcomes and results. Can manipulate fate as the attack has cook's ability of "the outcome is rewritten" imbued in it. It is a slash that brings the results that the user wishes for. Even if fate said that something cannot be cut, this ability will still allow the user to cut through it), Law Manipulation (Can overwrite phenomena and laws), Spatial Manipulation (Can sever dimensions and disconnect space), Weather Manipulation (Can create a huge black storm sphere in which the enemy will be shredded to little pieces by the blades of wind and by the lightning balls), Corrosion Inducement (Can clad his body with a barrier of wind with a deadly corrosion and decaying properties), Probability Manipulation (Mishap allows the user to purposely cause an unexpected phenomenon to happen to the enemy. Can double probability into the users favor, for example if there was only a 50% chance of escaping an attack, that 50% would turn into a 100% chance of escaping), Supernatural Luck, Acausality Negation (Types 3 & 4. Space-Time Continuous Strike is capable of exceeding time and space to strike the opponent, even ignoring things like Veldora Tempest's Parallel Existence and Multiple Existence. Tyranneous Lord Susanoo controls the laws of causality and is able to affect even Ultimate Skill users, such as Dagruel), Deconstruction (Arc Sanctuary causes those that can't resist it to have their body begin disintegrating and be transformed into magic essence immediately), Resistance Negation (Anaphylactic Shock robs his opponents of their resistance), Gravity Manipulation, Black Hole Creation (Quasar Break creates a super dimensional vibration with the user as its epicenter. It converts the user's own body into a pseudo-black hole, which absorbs and destroys all matter. Anything caught in his attack won't just be disintegrated, they will be swallowed into the black hole and disappear), Energy Absorption (Minus Break steals energy upon contact, even if it is blocked), BFR & Resistance Negation (Can send his targets to the End of Space and Time, which also ignores resistances), Body Puppetry

Attack Potency: Multiverse level (Rimuru's Turn Null accumulated enough energy to allow the former to create/rebuild tens of thousands of worlds[2], and can use the same energy to cause destruction on such scale[3]. Became comparable, if not superior, to Veldanava[4]), likely higher (The infinite Mobius-System grants the user infinite energy potential[5]), higher over time (Rimuru evolves every day becoming stronger to the point that he completely outclasses those who were major threats to him before)

Speed: FTL (Superior to Chloe, who outpaced Hinata's Melt Slash, a technique superior to Disintegration, which moves at the speed of light), Massively FTL+ reactions with Thought Acceleration (Thought Acceleration amplifies his perception by 1.000.000x or 10.000.000x). Likely Infinite (Superior to Veldanava who was the source of Time itself on a conceptual level[6]. Able to instantaneously reach any location with his will alone[7])

Lifting Strength: Stellar (Can lift Veldora's sword, which has mass comparable to a star)

Intelligence: Nigh-Omniscient (Observed and remade an entire universe, nearly identical to what it had been before[8])

Wisdom King Raphael: An evolution of the Great Sage Unique Skill. It confers the following abilities:[35]

Storm King Veldora: An ultimate skill acquired after Rimuru analyzed Veldora which has the following effects:[36]

Covenant King Uriel: An ultimate skill Rimuru acquired after evolving and analyzing the hero's infinite prison, it has the following sub-skills:[36]

Manas: Ciel (Wisdom God's Core): The core of Wisdom Lord Raphael that gained individuality, personality, and will after being named by Rimuru. Although not classified as an Ultimate Skill, she (Rimuru refers to Ciel as a female) possesses improved abilities compared to her old self. Ciel's power revolves around in-depth analysis, learning, and problem-solving skill, and overall utility at using spells to its utmost efficiency. Her subskills are the following:[37][7]

Evil Dragon Lord Azi Dahaka: An Ultimate Skill that originally belonged to Vega that was inherited by Zero and was later obtained by Rimuru. This Ultimate Skill power revolves around manipulating organic matter and creating clones. Its sub-skills are the following:[38] 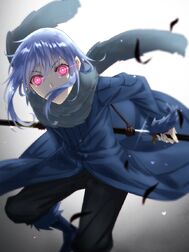 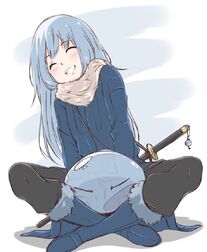 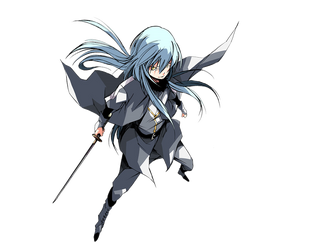 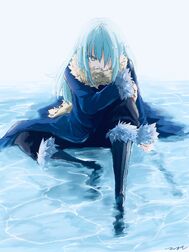 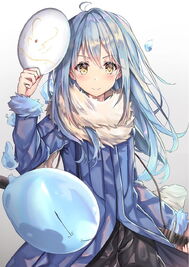 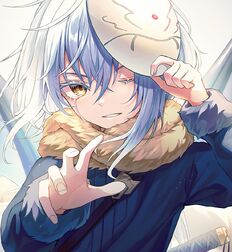