All Fiction Battles Wiki
Register
Don't have an account?
Sign In
Advertisement
in: Pokémon, Martial Artists, Superhumans,
and 45 more

It evolves into Lucario when leveled up with high friendship during the day.

It is sensitive to a special type of energy called Aura; however, It does not have the ability to fully use these powers, although it can still emanate these waves to communicate and sense them, albeit only in ripples. It has developed two black appendages that hang down from its head, which rise when Riolu reads or manipulates aura, a special energy that it senses. Like almost all Fighting-type Pokémon, Riolu naturally has superhuman strength, stamina, and endurance and is capable of making long journeys on foot in a short amount of time. It is a playful, energetic, and loyal Pokémon.

It evolves from Riolu when leveled up with high friendship during the day.

Lucario can Mega Evolve into Mega Lucario using the Lucarionite.

Lucario is considered to be prideful and is extremely loyal to its Trainer. It also seems to have a natural sense of justice. It usually lives deep in mountains very far from people to improve their skills. It is an exceptionally rare Pokémon. Lucario are primarily carnivores, hunting their prey in packs, though one Lucario was seen eating Berries and plants like roses. It has also been seen eating chocolate, even though chocolate is not part of its natural diet.

As Mega Lucario, its cream fur becomes longer, and its thighs slim down. It develops more spikes on the back of its paws, which have turned crimson. It also develops spikes on both of its feet, which have become crimson too. Its previously red eyes are now orange-colored. Its aura-sensing appendages grow longer, and two of them are tipped in crimson. Its shoulders also possess a spike each. Its aura heightens throughout its body, which formed black markings on its blue fur. In Kalos, Mega Lucario is believed to be the first discovered Mega Evolution. People call Mega Lucario's fighting style heartless due to it being bathed in the explosive energy of Mega Evolution, awakening its combative instincts and causing it to not show any mercy to any of its opponents.

Powers and Abilities: Superhuman Physical Characteristics, Aura, Extrasensory Perception, Telepathy (Mind Reader senses the foes actions to make sure the next attack will hit), Enhanced Senses (Able to Sense other's auras and emotions, even able to read their thoughts and emotions), Martial Arts (Likely Type 4), Supernatural Willpower (Endure allows them to always survive at 1 HP), Afterimage Creation, Damage Boost (With Counter, whathever damages he takes [As long as he survives], he retribute with double the damage he just takes), Statistics Amplification (Work Up increases his attack and defense. Nasty Plot increases his attack. Swords Dance increases his attack. Agility increases his speed), Sound Manipulation, Statistics Reduction (Screech lowers their opponents defense. Howl lowers his opponent attack), Power Mimicry (Mimicry allows them to copy his opponent's moves. Role Play makes them copy their opponent's special ability), Paralysis Inducement (Force Palm has a 30% chance to paralyze his opponent), Power Nullification (Detect prevents any attacks from hitting them), Air Manipulation, Power Bestowal (Coaching increases his allies defense), Ice Manipulation (Via Ice Punch), Electricity Manipulation (Via Thunder Punch), Healing (With Rest, he sleeps and heals to Max HP), Empathic Manipulation (Attract makes the opponent fall in love with them as long as the opponent is the opposite gender), Earth Manipulation (Can cause earthquakes with Earthquake), Weather Manipulation (Via Rain Dance and Sunny Day), Forcefield Creation (Via Protect), Minor Damage Reduction Negation (Brick Break negates and cancels the effects of Reflect and Light Screen), Life Absorption (With Drain Punch he can heal himself by punching the enemy and taking 25% of the damage dealt as healing), Instinctive Reactions (With Sleep Talk, they can attack while sleeping), Creation (Can create a plushy to substitue them in battle with Substitute), Fire Manipulation (With Blaze Kick), Poison Manipulation, Magnetism Manipulation, Elemental Manipulation (Via Hidden Power), Empowerment (Return deals more damage the more they like their trainer, while Frustation does more damage the less they like their trainer), Darkness Manipulation, Bone Manipulation (With Bone Rush), Energy Manipulation (With Aura Sphere, they can control their aura and throw to attack others), Water Manipulation, Telekinesis, Shockwave Creation, Resistance to Normal, Poison, Rock, Steel, Grass, Ice, Bug, Dragon, Dark and Steel type moves

Range: Standard melee range physically, up to Kilometers with powers 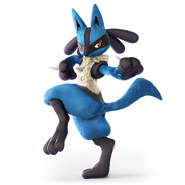