All Fiction Battles Wiki
Register
Don't have an account?
Sign In
Advertisement
in: RWBY, Characters, Female Characters,
and 25 more 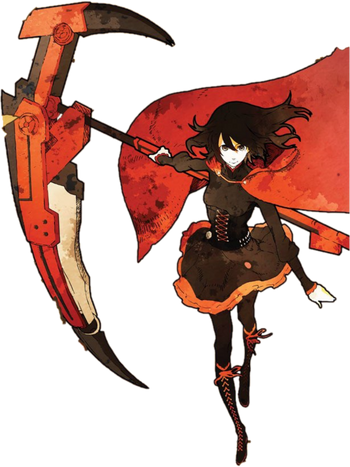 Ruby Rose is the 15-year old leader of Team RWBY attending Beacon Academy two years early, due to her abilities impressing the headmaster. Trained by her Uncle Qrow, Ruby wields a unique weapon named Crescent Rose, a cross between a scythe and a high-caliber sniper rifle that is able to fold up into itself. Her semblance is speed, enabling her to run at rates that are too fast for the eye to catch. As she is the youngest of the group, she can be a bit childish, naive, and weapon-obsessed, but displays leadership qualities and an understanding of people that ultimately led her to be chosen as Team RWBY's leader

Powers and Abilities: Superhuman Physical Characteristics, Regeneration (Mid-Low; aura can heal the user when they receive large wounds, leaving no scars), Acrobatics (She can do many mid air maneuvers), Weapon Mastery (Type. 1, she's extremely skilled with Crescent Rose and the sniper rifle function), Aura (RWBY), Aura and limited Soul Manipulation (She manifests her soul in the form of life force to create a shield around her and it's direct connected to her life), Forcefield Creation (She has a shield around herself at all times), Statistics Amplification (She can increase her striking power with her aura), Enhanced Senses (Aura can enhance the users senses), Super Speed (Via Petal Burst), Pseudo-Flight (She can propel herself with Crescent Rose and with Petal Burst), Elemental Manipulation (Via her Dust Ammunition), Fire Manipulation (Via fire dust), Ice Manipulation (Via ice dust), Electricity Manipulation (Via electric dust), Gravity Manipulation (Via gravity dust), Status Effect Inducement (She can flash-freeze a target with ice dust), Resistance to Heat Manipulation and limited Ice Manipulation (Aura protects the user from sub-zero temperatures, allowing them to walk through a blizzard in casual clothing or be encased in ice without being cold, as well as extreme heat up to and including the heat of flames, being blasted with steam, and being submerged in lava without being burned), limited Soul Manipulation (Aura can protect from aura enhanced physical attacks).

Attack Potency: Town level+ (She was able to decapitate the Nevermore, who was capable of this and is comparable to Yang who cracked the skull of the Nevermore)

Durability: Town level+ (Her durability should match her Attack potency)

Stamina: High (Ruby can mutilate hordes of monsters by herself, with no signs of fatigue)

Intelligence: Gifted (Ruby is extremely knowledgeable regarding weapons, having designed and built Crescent Rose from scratch on her own during her time at Signal Academy, and being able to name every individual part of her weapon. She is capable of analyzing a weapon she's never seen before down to the function and the material it's made of just by looking at it once. She is capable of taking on entire hordes of Grimm on her own and utilizing the different functionalities of the Crescent Rose, such as the massive recoil from the rifle aspect of the weapon and the weapon's transformative capabilities, in tandem with each other and her Semblance in order to maintain an edge over her opponent. Ozpin himself has stated that it would take someone with skill comparable to that of Qrow in order to wield Crescent Rose to its fullest efficiency)

Dust Ammunition: Crescent Rose is able to use different kinds of Dust ammunition.

Semblance: Petal Burst: Ruby's Semblance is Speed, an ability which allows her to move at a much greater speed than what she is normally capable of, appearing as nothing but a red blur leaving rose petals in its wake.