All Fiction Battles Wiki
Register
Don't have an account?
Sign In
Advertisement
in: Characters, Genderless Characters, Immortals,
and 11 more 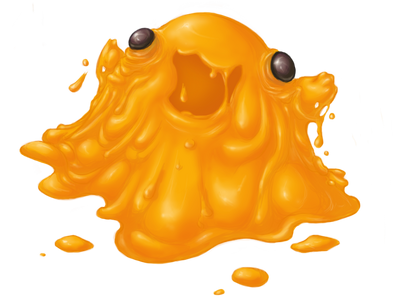 SCP-999 appears to be a large, amorphous, gelatinous mass of translucent orange slime, weighing about 54 kg (120 lbs) with a consistency similar to that of peanut butter. Subject’s size and shape is easily malleable and can change shape at will, though when at rest, SCP-999 becomes a rounded, oblate dome roughly 2 meters wide and 1 meter in height. The surface of SCP-999 consists of a thin, transparent membrane similar to that of an animal cell roughly .5 cm thick, and is highly elastic, allowing SCP-999 to flatten portions of its body up to 2 cm thin. This surface is also hydrophobic, although SCP-999 can willfully absorb liquids. The rest of SCP-999's body is filled with a viscous orange substance of unknown chemical makeup, though it is capable of digesting organic materials with ease.

Subject’s temperament is best described as playful and dog-like: when approached, SCP-999 will often react with overwhelming elation, slithering over to the nearest person and leaping upon them, “hugging” them with a pair of pseudopods while nuzzling the person’s face with a third pseudopod, all the while emitting high-pitched gurgling and cooing noises. The surface of SCP-999 emits a pleasing odor that differs from whomever it is interacting with. Recorded scents include chocolate, fresh laundry, bacon, roses, and Play-Doh

Powers and Abilities: Immortality (Type 3), Regeneration (Low-High), Inorganic Physiology, Mind Manipulation and Empathic Manipulation (Capable of causing euphoria with a touch. Interaction with it can cure severe depression and PTSD. It was even able to temporarily subdue SCP-682. Although it is still an infant, it will have the capacity to affect The Scarlet King at its full potential), Shapeshifting (Can change its shape at will), Elasticity, Absorption (Can absorb liquids. Has a strange orange liquid that can digest organic material)

Speed: Unknown, possibly Supersonic (Was able to react to and block bullets)

Intelligence: Behaves like an infant, but understand human speech, technology and how guns works.

Weaknesses: Often childlike in behavior, its power is nowhere near its full potential due to just being an infant.