All Fiction Battles Wiki
Register
Don't have an account?
Sign In
Advertisement
in: Characters, One-Punch Man, Protagonists,
and 17 more

Saitama (サイタマ, Saitama) is the main protagonist of the series and the titular One-Punch Man. He is the most powerful being to exist in the series. Saitama faces a self-imposed existential crisis, as he is now too powerful to gain any thrill from battle.

Initially just a hero for fun, Saitama later registers to be a professional hero for the Hero Association upon realizing that nobody recognizes him as a hero, and defends his home in Z-City from monsters, villains, and other threats. Under the Hero Association, he is assigned the hero name Caped Baldy (ハゲマント, Hagemanto; Viz: Bald Cape) and is currently B-Class Rank 7.

Powers and Abilities: Superhuman Physical Characteristics, Acrobatics, Shockwave Creation, Statistics Amplification, Supernatural Willpower (His sheer determination and willpower made him break his limiter despite being an average guy), Accelerated Development (Training and Passive. Can one punch the version of him from yesterday), Pain Tolerance (Type 1), Dimensional Travel, Non-Physical Interaction (Can interact with Pheonix Man spiritual dimension), Afterimage Creation, Enhanced Senses, Aura & Fear Manipulation (His strength is so massive that he causes fear on whoever faces him even unintentionally), Resistance to Extreme Heat (Can submerge into lava with no problem. Once break out of ice with no signals of cold), Telekinesis (Tatsumaki was unable to do anything against Saitama), Power Nullification

Stamina: At least Very High (Ran for hours straight without getting tired)

Weaknesses: Never takes fights seriously and always holds back, has no experience with martial arts

Serious Series (必殺マジシリーズ, Hissatsu Majishirīzu): In Serious Series, Saitama still attacks without putting in much effort. But Saitama's face looks more serious when he performs Serious Series attacks. Saitama does not actually consider these moves to be anything special. 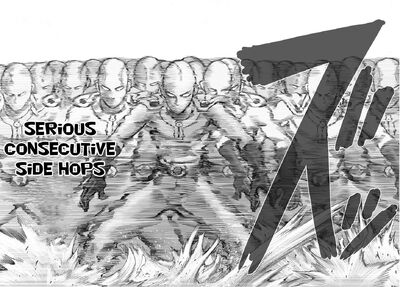 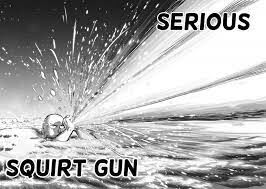