All Fiction Battles Wiki
Register
Don't have an account?
Sign In
Advertisement
in: Bendy and the Ink Machine, Adults, Characters,
and 14 more 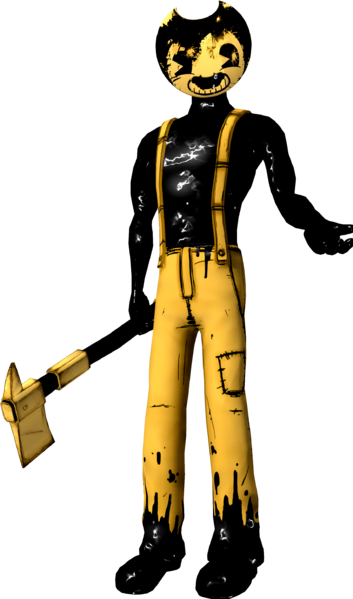 Sammy Lawrence is a minor antagonist in Bendy and the Ink Machine, and one of the bosses in Chapter 5. He is one of Bendy's prophets and actually the first prophet Henry encounters. He was also the music director of Joey Drew Studios.

Powers and Abilities: Superhuman Physical Characteristics, Immortality (Types 1, 2, 3, and 8. He can't truly die until all of the ink is gone or destroyed and the Ink Machine is destroyed, if he dies he'll return to it and can reform from it), Regeneration (Low-High; He can reform from his ink or any ink), Ink Manipulation and Weapon Creation (He can create items, weapons and etc. from ink), Weapon Mastery (Type 1. Skilled with an axe), Martial Arts (Type 1. He's able to knock Henry out with a single strike), Intangibility (He has shown the ability to go through walls to place the bendy cutouts around the studio)

Attack Potency: Wall level (He can knock Henry out and can kill him)

Durability: Wall level (Should be comparable to Alice Angel and can take attacks from Henry)

Stamina: High (He could survive an encounter with Bendy and can fight Henry)