All Fiction Battles Wiki
Register
Don't have an account?
Sign In
Advertisement
in: Characters, Female Characters, Protagonists,
and 66 more 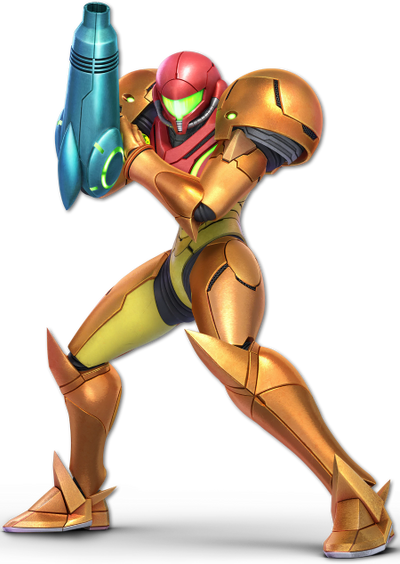 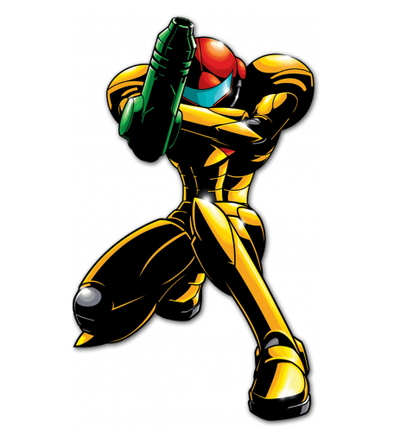 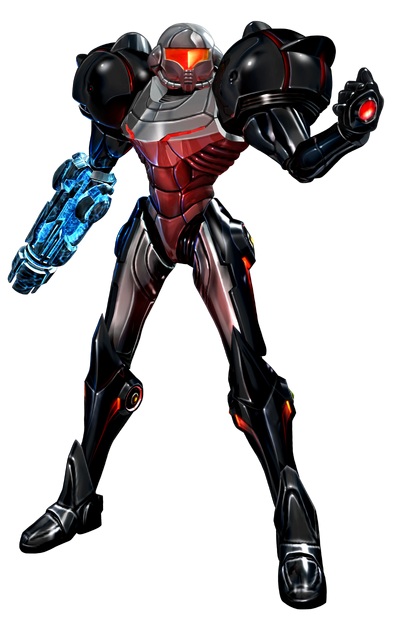 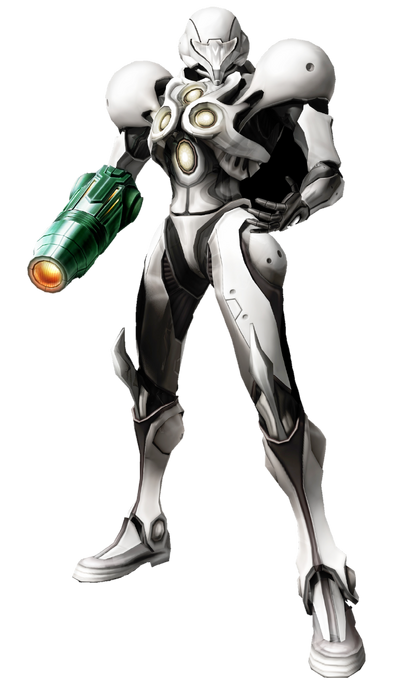 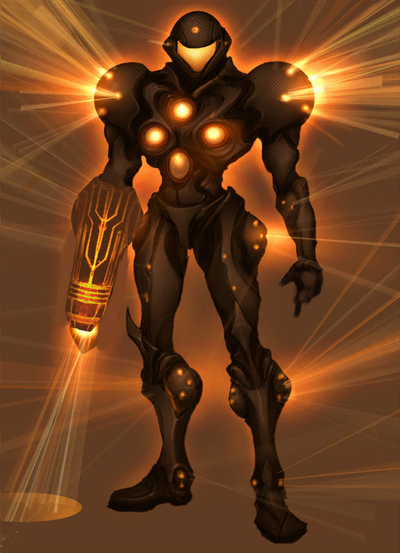 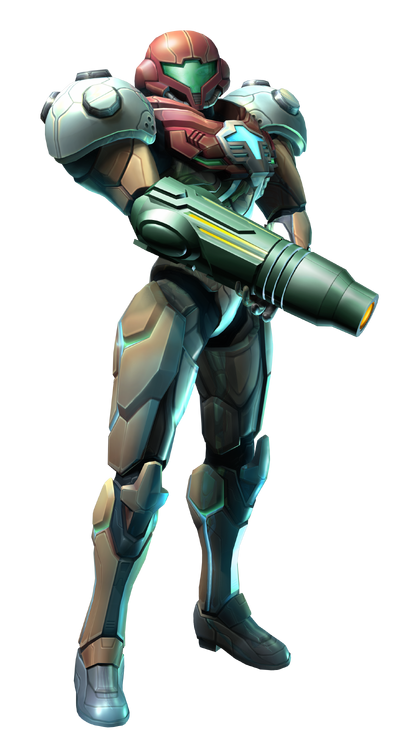 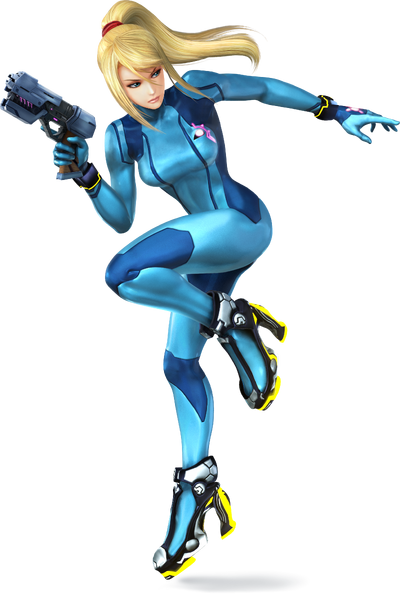 Samus Aran (サムス・アラン Samusu Aran) is the protagonist of the Metroid series.

Samus was born on the planet known simply as K-2L, which was an Earth colony. Her parents were Rodney and Virginia Aran. Ridley, a Space Pirate commander, ordered an attack on K-2L in an attempt to dissuade Earth colonists from space exploration. This attack killed all the colonists on K-2L to include Mr. & Mrs. Aran.

Later, Samus was adopted by the mysterious Chozo and taken to Zebes, where she was infused with their DNA and raised to become a warrior. Once she reached adulthood, Samus joined the Federation Police and served under the Commanding Officer Adam Malkovich. Though she ultimately left to become a Bounty Hunter, she was nonetheless hired by the Galactic Federation on many occasions.

Equipped with her cybernetic Power Suit, Samus has become famous for accomplishing missions previously thought impossible. Her most renowned achievements are the destruction of the Space Pirate base on Zebes, her role in ending the Galactic Phazon crisis, her extermination of the Metroid species, and her disobedience of orders at the Biologic Space Laboratories research station where she chose to destroy the deadly X Parasites rather than turn them over to the Galactic Federation.

Superhuman Physical Characteristics, Acrobatics, Weapon Mastery (Type 1. Proficient in the usage of cannons and other ranged weapons), Martial Arts (Type 4), Enhanced Senses (Her Visor allows her to see in the dark, see the infrared spectrum so that she can locate and track other beings based on their heat signatures, and to see objects that are caught in flux between dimensions, such as objects that exist on both Aether and Dark Aether. X-Ray Visor can see through solid object or flesh, and track targets that would otherwise be invisible), Information Analysis (Her Scan Visor allows her to analyze the target's traits, abilities and weaknesses), Hacking (Can near-instantly hack highly advanced security systems with her scanner), Paralysis Inducement (The Paralyzer Gun can be used to stun enemies, rendering them temporarily immobile), Data Manipulation, Energy Projection, Ice Manipulation (Her Ice Beam can instantly freeze enemies), Intangible & Homing Attacks (The Wave Beam fires oscillating wave energy that can pass through walls, armor, and forcefields, which can lock and home onto targets), Explosion Manipulation (When in Morph Ball form, she can set up bombs which explodes away enemies and obstacles. These small explosives function on a timer and can float in the air if Samus sets them while jumping or falling. By using the explosions of her bombs to propel herself upwards, Samus can reach locations that she normally would not be able to), Non-Physical Interaction (Can interact with intangible and non-corporeal beings, such as Chozo Ghosts), Regeneration (High-Low), Statistics Amplification (Can amplify her speed with Speed Booster), Resistance to Mind Manipulation and Acid Manipulation

All previous abilities, plus Plasma Manipulation (Can shoot a beam of plasma that can easily pierce through multiple enemies at once, dealing extensive damage), Pseudo Flight (Can perform air jumps indefinitely), Invulnerability (Becomes invulnerable to damage when using Screw Attack), Underwater Breathing (Type 3), Rage Power (Type 2. Can enhance her strength over 5x when enraged), Damage Reduction (Reduces damage taken from enemies by 50%), Nigh-Absolute Zero Ice Beam (The Judicator is powered by cold-fusion synthesis. It fires supercooled plasma at temperatures of nearly Absolute Zero), Homing Attack & Matter Manipulation (Sub-Atomic. Shock Coil fires a concentrated beam of high-density neutrinos, homing in on targets and dealing damage on a subatomic scale), Fire Manipulation, Electricity Manipulation (The Volt Driver draws energy from the planetary electromagnetic field and converts it bursts of high-voltage), Absorption (Can create a field of green electricity, protecting herself from harm by absorbing attacks directed at her), Time Manipulation (Can slow down time with Phase Drift), Radiation Manipulation (Omega Cannon fires a slow-moving sphere of timed radioactive energy that can travel a great distance before it explodes. Even when unused, the Omega Cannon emits high levels of gamma radiation), Magma Manipulation (The Magmaul, powered by a hyperstatic hydrogen core, fires cohesive projectiles of superheated magma), Light Manipulation (The Light Beam draws upon the light energy found within Aether's atmosphere, using this power to fire searing beams of light that can pass through enemies and set them alight. When charged, the Light Beam instead fires a scattering of white-hot spheres that home into locked-on targets and set them on fire), Darkness Manipulation & Transmutation (By mimicking dark energy, the Dark Beam fires blasts of swirling, strange energy, and can be charged up to encase/transmute targets into a brittle but immobilizing shell of dark energy that she can shatter with a missile), Reactive Evolution (Her suit was able to adapt to massive amounts of phazon, which in turn evolved her Varia Suit into Phazon Suit), Resistance to Heat Manipulation (The varia suit protects Samus from superheated and sub-zero areas), Gravity Manipulation (The gravity suit protects her from gravity effects), Matter Manipulation (Sub-Atomic), Antimatter Manipulation, Possession (Gained a device made by the Luminoth made to specifically protect the user from being possessed by the Ing), Phazon Manipulation

All previous Varia Suit abilities, plus Antimatter Manipulation & Status Effect Inducement (The Annihilator Beam combines light and dark energy to fire a concentrated matter-antimatter shot that homes in on targets and has an incredibly high fire rate), BFR (Darkburst creates a dimensional rift in which the surrounding targets are sucked into another dimension), Durability Negation & Space-Time Manipulation (Condensing matter and antimatter, Sonic Boom fires a sonic blast that instantly travels to the opponent and rips open a distortion/fracture in the fabric of space and time, erradicating its targets), Resistance to Poison Manipulation (Can survive the Dark Aether's toxic atmosphere)

All previous Varia Suit abilities, plus Life Absorption & Phazon Manipulation (Can absorb the life force or Phazon directly from enemies with her Grapple Voltage, or release phazon directly inside her enemies, causing them to explode. Can shoot beams of energized phazon), Resistance to Phazon

All abilities from Varia Suit, plus White Hole Creation

Attack Potency: Multi-Continent level (She was capable of freezing the surface of the Sun. Her basic beams can destroy an underwater volcano) | Planet level (Can easily destroy planets with Power Bombs. Capable of killing Tallon Metroids, who could survive the collision of the Leviathan on Tallon IV) | Planet level (Stronger than her Varia Suit) | At least Dwarf Star level+, likely Large Star level (Capable of damaging and defeating Dark Samus, who was able to survive the destruction of Dark Aether, which was converted into energy, when in a beaten/nearly killed state) | At least Planet level (Should be stronger than the Varia Suit). Dwarf Star level+, likely Large Star level with Hypermode (Could damage a Post-Phaaze Absorption Dark Samus, who at that point was immensely stronger than her previous version) | Universe level (She was granted the power of Animus in order to stop a massive black hole which was going to destroy the universe)

Lifting Strength: Class M (Capable of throwing creatures submerged in water two stories high, whom of which are the size of buses, whilst on a planet with heavy gravity. Also shown to swing said fish in the air with seemingly little effort. Was able to hold up a giant missile with only one arm, on Planet Zebes, where gravity is 960x that of Earth. Comparable to Ghor, who can lift her gunship)

Stamina: High (Her suits are shown to be capable of traverse numerous planets, even whilst damaged and under intense gravity. Capable of fighting opponents while tired and drained). Limitless with Phazon (Has access to a endless supply of Phazon and as long as she has this, her energy will never deplete)

Range: Stellar. Her Power Suit can detect environmental changes ranging from Planetary range to Interstellar range, up to Cross-dimensional (Could detect changes in Dark Aether from Aether, or even other planets in Metroid Prime 3) | Universal

Standard Equipment: Her Power Suit and all of its upgrades and equipments

Intelligence: Genius (Is regarded as the greatest of all space hunters and has successfully completed numerous missions that everybody thought were absolutely impossible. Taken in and by trained by the Chozo at an earlier age, Samus is a master of all forms in combat, being an incredibly skilled hand-to-hand combatant, markswoman, acrobat, and gunship pilot. She is also quite intelligent when it comes to technology, having designed the gunship she used in Metroid Prime 3)