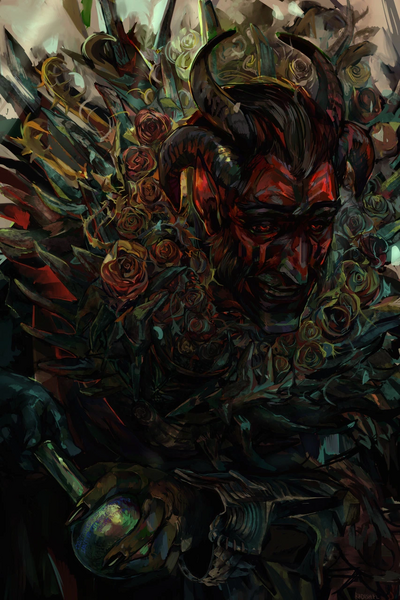 Sanguine, known to his worshippers as the Lord of Revelry "who tastes the Shaven Fruit", is a Daedric Prince whose sphere is hedonistic revelry, debauchery, wild orgies, and passionate indulgences of darker natures. As the Daedra Prince of Lust, Perversity, and Unnatural Sexual Relations, anything in excess is his motto. He is considered by some to be one of the weaker princes. Sanguine is depicted as a portly man with a dremora-like head with horns, usually with a bottle in his hand or a whore under his thumb. He is thought to control thousands of small realms. He is known to be allied with Vaermina, while his enemies are Ebonarm, the House of Dibella and the Benevolence of Mara. His summoning day coincides with Heart's Day, which falls on the 16th of Sun's Dawn

Sanguine has a reputation among mortals for not being "as bad" as other Daedric Princes, and is more likely than most princes to take an interest in mortal affairs. Some see him as a harmless inveterate drunk due to his outgoing nature and his propensity for partying and drinking alcohol. In spite of his vulgar nature, many consider Sanguine one of the more "sophisticated" Princes. Those who worship him or appreciate his nature claim that Sanguine has never hurt anyone maliciously. He enjoys playing pranks on others. He is reputed for throwing the best parties in Oblivion, and celebrates at the drop of a hat. One instance of these spontaneous celebrations is the 400th anniversary of Sanguine's dog learning to play "undead", which occurred some time around 2E 182. All manner of entertainment can be found at Sanguine's parties, such as stage plays, orgies, bardic concerts, dancing, skooma, arena fights and, of course, refreshments. Food and drink are usually present, but Malacath is not

Partying with Sanguine can be a dangerous affair, as those who stay too long may not want to leave or are enticed to stay, and may end up dying there. It is in Sanguine's nature to indulge the natures of others, particularly their darker desires—so to Sanguine, 'absolute control' is anathema. The Daedra in attendance may also become violent towards mortal guests. Sanguine welcomes all mortals to his shindigs, but those who enter must partake in the drinks there if they wish to remain. Those who drink from Sanguine's goblet will be bound to the party and unable to leave. Sanguine's cultists have tricked entertainers into signing contracts that force them to perform endlessly for Sanguine's parties. Some desperate mortals who have been forced to stay have committed suicide to escape. Mortals who have business or families on Nirn may be tempted to abandon their families and responsibilities to stay forever

Gender: Inapplicable, Appears as a Male

Attack Potency: High Hyperverse level (Sanguine is a Daedric Prince which maintains and comprises Oblivion, and is one of the Ruling Princes and holds a great piece of oblivion in which he holds absolute control of and is one of the Creators of Oblivion) | Ascendent level (In his Original State Before creating, he was an Et'Ada who were Boundless, Eternal and Infinite Spirits who existed wholly independently of duality, predating the concepts of Time and Space, and living in pure harmony, having practically no personalities or boundaries that separated themselves from anything else, inhabiting creation in its original Zero-State of pure Infinite possibility, where everything that can and cannot happen is always happening all at once, forever, regardless of contradictions)