All Fiction Battles Wiki
Register
Don't have an account?
Sign In
Advertisement
in: Characters, Male Characters, Anime Characters,
and 38 more 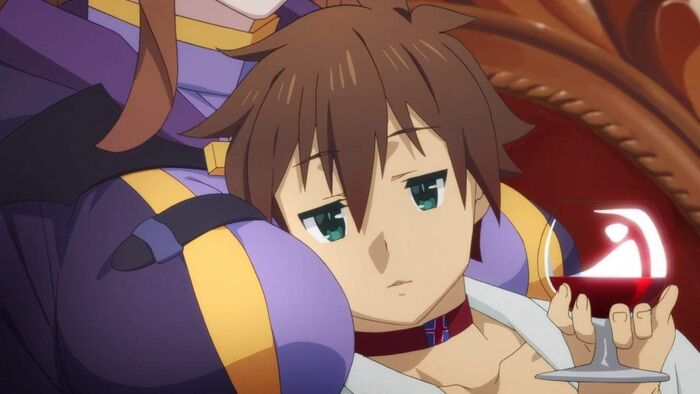 Satou Kazuma is the main protagonist of the KonoSuba series. He was reincarnated into the Fantasy World after dying.

He was originally a student from Japan who always skipped out on school in favor of lazing around at home playing video games. Eventually he died in an accident and was sent to the fantasy world alongside the Goddess of Water Aqua in order to defeat the Demon King, who sought to oppress the free peoples of the fantasy world.

Superhuman Physical Characteristics, Social Influencing, Supernatural Luck (He is the second luckiest character in the series, only surpassed by the Goddess Eris, his luck is so great that he was able to continuously win at the Elroad national casino to the point of almost leaving the country bankrupt.), Expert Marksman and Swordsman, Soul Absorption (Able to partially absorb souls as EXP), Power Mimicry (Adventurers can learn the skills of others), Accelerated Development (He is able to level up in an incredible way due to his great luck and lack of talent) Telekinesis (Can steal items remotely), Enhanced Senses (Night Vision, Enhanced Sight and Enemy Detection), Presence Concealment, Can steal life and mana and transfer it to himself or others, Water Manipulation, Ice Manipulation, Fire Manipulation, Earth Manipulation, Air Manipulation, Weapon Creation (He is able to create weapons using water and freezing it), Statistics Amplification (He is able to increase his stats and evasion with Escape and Vanir's mask.), Chain Manipulation (Possesses the ability to use ropes and chains to immobilize people), Non-Physical Interaction with Mythril Wire allows user to bind non-corporeal beings and affect them in the same way), Explosion Manipulation (Able to use dynamite to make explosions), Damage Boost (He has a knife that gives him more damage against aquatic enemies), Likely Resistance to Mind Manipulation

Same as before plus Damage Transferal, Creation (Can create golems), Healing (Can heal himself and others), Teleportation and BFR (Can teleport himself and others with the Teleport spell), Instinctive Reaction (Thanks to his luck, he is able to dodge attacks that cannot normally be dodged even with skills), Light Manipulation, Electricity Manipulation, Death Manipulation (Deadly Backstab allows instant death his target), Explosion Manipulation, Heat Manipulation (He can modify the heat of his explosions), Limited Power Nullification (He can nullify any spell that can be deadly or fatal with the sword of Dust, although it is only effective once ), Likely Sleep Manipulation, Paralysis Inducement and Limited Sealing (Has the 3 spells mentioned above, but never used them)

Attack Potency: Athlete level (Has enough strength not to lose to a normal human in a test of strength), Wall level with Spells, Small Building level with Dynamite and Explosion (His Explosion's blast was stronger than the Demon King when he used advanced magic, although it is not as strong as Wiz and Megumin but it served to surpass the Demon King.)

Speed: Superhuman, likely Subsonic (He is faster than horses and many of the monsters)

Stamina: Above Average. Can use drain touch to replenish his stamina.

Range: Standard melee range normally, Extended melee range with Chunchunmaru, Low Multiversal with Teleport (At the end of the series he is able to teleport to heaven, which is outside his actual fantasy world and his previous world.)

Intelligence: Above Average. He is able to analyze and determine the best decision depending on the situation or enemy and he does not care that his methods are not the best seen.

Weaknesess: In general, he is very lazy and greedy, he is very cowardly and always depends on the help of his friends to get out of a difficult situation, he will not be able to move if he runs out of magic power because he does not have much mana and his offensive spells do not do a lot of damage, in short if this one could die at any time.

Key: Base | End of Series