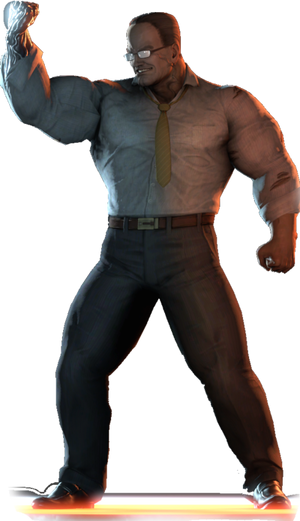 Senator Steven Armstrong is the main antagonist of Metal Gear Rising: Revengeance, and is a United States Senator representing the U.S. state of Colorado, as well as a candidate for the 2020 United States Presidential Elections, born in Texas. When Armstrong was young, he used to play college football for the University of Texas, in which he excelled at the game. Years later, he later joined the United States Navy, which sacrificed his chances of going pro, but was due to his desire to help the country, but hadn't seen actual combat within his time in the Navy. By the time of 2018, Armstrong became the senator of Colorado. He was also the benefactor for World Marshal Inc., as well as its de-facto CEO, alongside being its most powerful warrior. An extremely nationalistic, patriotic and libertarian individual, Armstrong often expressed the desire to "reclaim the American dream" by instigating another American Revolution after Liquid Ocelot's insurrection and the Patriots' actions that weakened America. Senator Armstrong had also enhanced his physical state with the use of nanomachines earlier in his life.

Superhuman Physical Characteristics, Social Influencing (Senator Armstrong is an extremely charming individual, who can convince large amounts of people with no issue, alongside becoming the U.S Senator), Vehicular Mastery (Capable of piloting METAL GEAR EXCELSUS with enough skill to keep up with Raiden), Martial Arts (Type 3; Shown to be extremely skilled with hand-to-hand combat, even keeping up with sword-users without any issue, and being able to easily outskill them), Nanotechnology (Senator Armstrong's body is composed of nanomachines that allow him to strength his attacks), Heat Manipulation (Senator Armstrong can heat up his body when using nanomachines, which causes steam to erupt from his body), Aura, Electro-Magnetism Manipulation (Has an aura that has these effects, which can cause explosions and shockwaves, which he can also use to fling objects at people), Shockwave Generation (Can create shockwaves with his attacks), Statistics Amplification, Body Control, Biological Manipulation, and Absorption (Can absorb energy, which allows him to amplify his stats, power his nanomachines, heal himself, etcetera. Capable of releasing energy in order to strengthen himself and his abilities. Nanomachines harden themselves in order to react to attacks, blocking damage to themselves, and can be used to strengthen his attacks), Fire Manipulation (Can create fire with his charges and other attacks), Energy Projection (Capable of projecting large amounts of energy around him and projecting energy alongside his shockwaves), Limited Physics Manipulation (It's been stated that destroying a high-frequency blade with one's bare hands defies the laws of physics, and Senator Armstrong is capable of casually destroying them alongside being able to block attacks from them with his nanomachines), Regeneration (Low-High to Mid. Armstrong can reattach and regenerate lost limbs, and it was implied and stated that his Nanomachines would be comparable to Vamp's within official guides, in which it was required for complete physical vaporization (or to exploit them) for Snake to get past Vamp's nanomachines in the first place), Empathic Manipulation and Pain Manipulation (Nanomachines naturally suppress hormones and pain, alongside fear and battlefield emotions, and Armstrong was unaffected by the loss of his arm, even though the same attack had given Jetstream Sam a large amount of pain), Psuedo-Invulnerability (Nanomachines allow Armstrong in order to be completely unphased by damage)

Durability Negation. Quantum Manipulation, and Vibration Manipulation (Can naturally resist the effects of a High-Frequency Blade, which are shown and stated to do this), Empathic Manipulation, Fear Manipulation, Pain Manipulation (Nanomachines naturally suppress hormones, pain, fear, and battlefield emotions), Extreme Heat (Unaffected by the heat and fire he makes, alongside the explosion from METAL GEAR EXCELSUS), Possible Mind Manipulation (Explained here, Politicians are granted a resistance to being mind-probed, which Armstrong should also have)

Attack Potency: Large Town level (Armstrong was capable of destroying the METAL GEAR EXCELSUS, which would require this much energy. Was able to contend with Raiden in a long battle and had been able to injure him, alongside overpowering him, and even a single blow from Armstrong would have been a lethal attack to Raiden)

Speed: Sub-Relativistic (Raiden can outpace attacks from METAL GEAR EXCELSUS, and Armstrong is capable of keeping up with Raiden within combat, and while he has also been shown and stated to be slower than them, he can still fight with Jetstream Sam and Raiden. Raiden is this fast and Jetstream Sam is capable of also fighting Raiden)

Lifting Strength: Class G (Was able to mostly keep up with Raiden in his Ripper Mode, who would be far superior to this feat)

Durability: Large Town level (Had been unaffected by the explosion of METAL GEAR EXCELSUS)

Stamina: Very High (Armstrong is mostly unaffected by the loss of limbs and can keep up with Raiden in prolonged combat, and though he couldn't fight back, he was able to move and talk while Raiden had a grip on his fight, even after combat, which had even slightly tired out Raiden)

Intelligence: Gifted (Armstrong is an extremely charming and smart politician who had made an entire plan to 'fix' America, and was very charming. He's kept up with Raiden and Jetstream Sam in combat, and defeated the latter with a bit of difficulty, and has shown to be skilled in sports as well, alongside being in the Navy for a big part of his life, and is the CEO for massive military corporations, managing all of them fairly easily)

Standard Tactics: Armstrong will lead physically against his opponents, typically absorbing any technology/energy he's able to. He will sometimes attempt to bring those he finds worthy onto his side with Social Influencing.

Weaknesses: Senator Armstrong's heart is his main weakspot. His body can easily be cut apart if his nanomachines are incapable of reacting to the attack (As seen with his fight against Sam), and does require energy in order for him to be at his peak in most battles.