All Fiction Battles Wiki
Register
Don't have an account?
Sign In
Advertisement
in: Characters, Abstract Beings, Immortals,
and 63 more 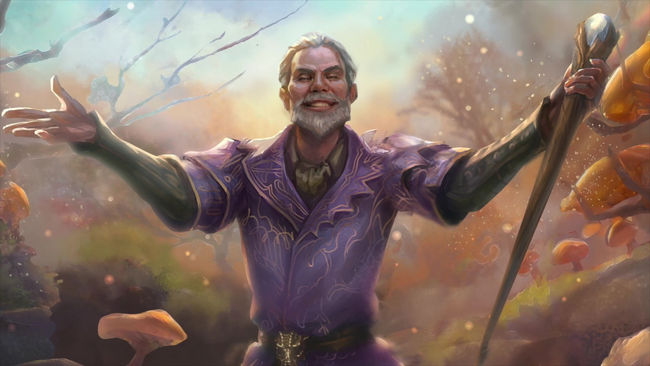 Sheogorath is the Daedric Prince of Madness, Fourth Corner of the House of Troubles, the Skooma Cat, Lord of the Never-There, Raver, Comforter of Men, and Sovereign of the Shivering Isles. His motives are said to be unknowable. He is sometimes referred to as the Mad Star, the Mad Lord, the Mad One, the Mad God, and Uncle Sheo among other things. His realm, best known as the Shivering Isles, has also been called the Madhouse. It's believed that those who go there lose their sanity forever. Of course, only the Mad God himself may decide who has the privilege to enter. The Golden Saints, or Aureals, and Dark Seducers, or Mazken, are his servants. The Mad God typically manifests on Nirn as a seemingly harmless, well-dressed man often carrying a cane, a guise so prevalent it has actually been coined "Gentleman With a Cane". "Fearful obeisance" of Sheogorath is widespread in Tamriel, and he plays an important part in Dunmeri religious practice.

Sheogorath owes his origin to his fellow Daedric Princes, for he was formerly Jyggalag, the Daedric Prince of Order. In times beyond memory, Jyggalag had vastly grown in power, and his influence spread across the seas of Oblivion. The other Daedric princes grew jealous and fearful and cursed Jyggalag to live as Sheogorath, the incarnation of the thing he hated most. The curse did allow Jyggalag to return in his true form at the end of every Era, and reconquer his lands, an event known as the Greymarch. After that, however, he would be transformed back into Sheogorath, and Sheogorath would spread madness upon his lands once more.

Gender: Inapplicable, More commonly takes the form of a Man

Classification: Daedric Prince, God, God of Madness, Fourth Corner of the House of Troubles, the Skooma Cat, Lord of the Never-There, Raver, Comforter of Men, and Sovereign of the Shivering Isles.

Attack Potency: High Hyperverse level (Sheogorath is a Daedric Prince which maintains and comprises Oblivion, and is one of the Ruling Princes and holds a great piece of oblivion in which he holds absolute control of)

Speed: Immeasurable (Can travel on the Infinite dimensions of Oblivion), Omnipresent (Inside his domains)

Intelligence: Nigh-Omniscient. Although his insanity makes him look less intelligent he is very smart and cunning.

Weaknesses: He is insane and rarely takes things seriously, however this leads to him being completely unpredictable