All Fiction Battles Wiki
Register
Don't have an account?
Sign In
Advertisement
in: Characters, Good Characters, Humans,
and 43 more

Shigeo Kageyama, nicknamed "Mob" and "White T-Poison", is a third-year student at Salt Middle School and the vice-president of the Body Improvement Club.

Born with immense Psychic Powers, Shigeo Kageyama is an Esper. After an incident harming someone close to him and realizing his powers are directly related to his emotions, he views his powers as a curse. Since then, he's suppressed both his emotions and powers to the world.

Under the guidance of his master, the self-proclaimed psychic Reigen, he attempts to come to grips with his power and live a normal life. However, ghosts, psychics, and evil organizations prevents "Mob" from living a normal life.

Superhuman Physical Characteristics, Flight, Telekinesis (Can telekinetically control anything he wishes. Can dismember and explode targets with a thought. Can ragdoll enemies at will), Extrasensory Perception (Can perceive spirits that are normally invisible to the human eye. Can sense and detect other espers on a radius of 20 km), Non-Physical Interaction, Power Nullification (Could cancel out Dimple's hypnowaves), Rage Power, Empowerment (Mob bottles his emotions up until he can't contain them. That moment when he can't contain them makes him far more powerful), Forcefield Creation (Mob's body is constantly shrouded by a ridiculous dense membrane of power that protects him from enemy attacks), Paralysis Inducement (Can stop targets from moving via telekinesis), Regeneration Negation of spirits (High. Can exorcise spirits, who can come back from raw energy and particles), Purification (Can exorcise evil spirits), Plant Manipulation (Can command plants and use them to attack), Power Bestowal (Can bestow a portion of his power to others), Astral Projection (Can project his soul out of his body), Resistance to Possession (Espers are naturally resistant to possession and mental influences), Memory Manipulation (Regained his memories back after Mogami erased them), Mind Manipulation, Empathic Manipulation, Electricity Manipulation (Unaffected by electricity), Soul Manipulation

All previous abilities, plus Energy Absorption & Energy Projection (Can absorb his enemies' energy and convert into his own), Limited Empathic Manipulation (Can share his emotions and memories with others)

All previous abilities, plus Power Absorption & Energy Absorption (Passively absorbs psychic power and energy from the atmosphere itself), Electricity Manipulation (Can discharge electric currents into targets), Air Manipulation (Just by being angered, tornadoes are created), Gravity Manipulation (His presence is enough to increase the degree of gravity around himself), Earthquake Manipulation & Weather Manipulation (Merely awakening in this form was causing multiple earthquakes and massive natural and supernatural disasters), Technology Manipulation (Caused numerous electric devices to cease functioning, such as cars and helicopters), Explosion Manipulation (Can create explosions)

Attack Potency: Large Building level (Much more powerful than Shimazaki, who destroyed the upper half of a skyscraper. Can hold his own against a casual Serizawa, who vaporized several layers of walls) | Mountain level+ (Caused massive clouds to shift) to Island level (Was still able to keep up with Toichirou as the latter was gradually increasing from 80% to 100% energy output. Briefly took in and redirected the energy of Toichiro's self-destruction) | At least Island level (Immensely stronger than before. His mere presence is enough to cause massive natural disasters. Effortlessly overwhelmed Toichiro. Destroyed the entire Dreamworld dimension that Mogami created)

Speed: Subsonic+ (Comparable to Shimazaki) | Hypersonic (Can cross 20 kilometers in an instant) | At least Hypersonic

Lifting Strength: Average Human. Class 25 with powers (Capable of easily lifting a car. Can uproot trees from the ground. Superior to Teru, who lifted 10 cars) | Class T (Lifted a huge ball made of hundreds of buildings and launched it into the ground) | Class T

Durability: Small Building level (Took a beatdown from Koyama. Survived a car crash but this left him unconscious). Large Building level with barriers | Mountain level+ to Island level (Could take hits from Toichiro even without his barriers. Endured Toichiro's self-destruction energy, which was stronger than what his barriers could contain) | At least Island level (Toichiro's attacks couldn't even scratch him, and such act was hurting Toichiro instead)

Intelligence: Average normally. Gifted power-wise (Capable of instantly knowing how to achieve other esper powers just by seeing them being used once)

Weaknesses: Has to experience strong emotions to enter 100% mode and can be knocked out/incapacitated before reaching it | None notable | None notable. 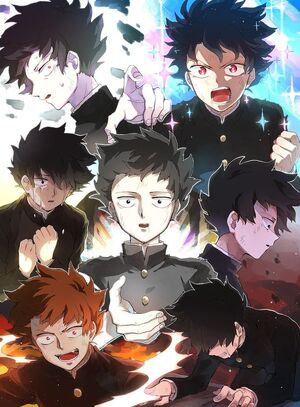 "???%" is a special state that Shigeo occasionally enters when he becomes unconscious, or when his physical vessel is destroyed. When ???% is active, Shigeo can unleash all of his latent psychic power at once, allowing him to achieve a level of psychic strength that is far beyond that of his 100% Explosions.