All Fiction Battles Wiki
Register
Don't have an account?
Sign In
Advertisement
in: Characters, Male Characters, Protagonists,
and 51 more

Shinra Kusakabe is the main protagonist of the Enen no Shoubotai (also known as Fire Force) series. He is a Third and Fourth Generation pyrokinetic in the service of Special Fire Force Company 8.

After his mother's death, and supposedly his younger brother's as well, Shinra joined the Special Fire Force to achieve his goal of becoming a hero, saving people from Spontaneous Human Combustion, and uncovering the truth behind his family's death twelve years ago. It is later revealed that Shinra possesses the Adolla Burst, making him The Fourth Pillar.

Superhuman Physical Characteristics, Martial Arts (Type 4), Acrobatics & Fire Manipulation (Can output fire from his feet, having complete control over it and allowing him to perform a myriad of acrobatics and attacks), Flight (Shown here), Explosion Manipulation (Can perform explosions with his kicks), Smoke Manipulation (Can create a smokescreen), Precognition (Type 1), Enhanced Senses & Instinctive Reactions (Can sense bloodlust and the breath of life, allowing him to instinctively dodge attacks and detect presences moments before they reach him), Chi Manipulation (Capable of controlling and focusing his inner energy, altering the power of his flames), Extrasensory Perception (Can connect to other dimensions with his "third eye", forcing thus Adolla Links on his own), Statistics Amplification (Can amplify his speed with Rapid, and his firepower with Hellfire), Energy Manipulation & Law Manipulation (Adolla is an energy from another dimension that can command all things, allowing the user to alter the world's laws), Time Stop (With Adolla Burst he can accelerate to the speed of light and stop time), Time Travel, Matter Manipulation (By travelling faster than light, his body breaks down into subatomic particles and goes back to normal right after via time travel), Memory Manipulation (When moving faster than light, Shinra makes time go backwards and can cause memories of the past to be shared among those on the surroundings), possibly Soul Manipulation (It was stated more than once that Shinra possesses soul-destroying flames), Resistance to Fire Manipulation (As someone from the third regeneration, his body has adapted to flames and he is unnafected by the heat of his own attacks), Heat Manipulation (Capable of fighting against Hibana's heat syncope), Electricity Manipulation (Was capable of withstanding 2 million volts), Time Manipulation (Could resist and invade Sho's frozen universe), Possession & Mind Manipulation (Broke free from the First Pillar's possession)

All previous abilities, plus Higher-Dimensional Existence, Abstract Existence (Type 1. Merged with his mom, becoming the concept of Hope itself, the opposite of the Evangelist's existence, who is the collective unconscious and Despair itself), Subjective Reality (Capable of turning his thoughts into reality. Can recreate the world as he pleases. Haumea further explained that Shinra's creations stem purely from his imagination), Air Manipulation (Created an atmosphere), Earth Manipulation, Water Manipulation & Plant Manipulation (Can manipulate the earth, water, and nature itself), Soul Manipulation & Resurrection (Can manipulate souls and resurrect people), Life Manipulation & Death Manipulation (Lessened the value of life and increased the value of death, turning death into something more intimate and closer, essentially forming the basis of the World of Madness, which also gave Death a form of its own), Conceptual Manipulation (Type 3. Destroyed the embodiment of the collective unconscious and despair itself), Law Manipulation (Changed the parameters of reality, making everything become goofy and cartoonish, including the sun)

Attack Potency: Town level (Comparable to Konro), higher with Rapid (Stronger than before as his speed is increased. The faster he is the stronger he becomes) and Hellfire (Stronger than before), Town level+ with Superfire (Becomes 3.3x stronger with Superfire). Mountain level with Adolla Burst (Capable of generating this much energy as he reaches SoL/FTL speeds) | Large Planet level+ (Stopped the moon from falling with a kick), higher with Rapid, Hellfire, Superfire and Adolla Burst | Low Macroverse level (Destroyed the embodiment of the collective unconscious, i.e Adolla, a transcendent world which contains all ideation/ideas/concepts, laws, truths, higher dimensions, mathematics, etc,...the place where all of human conception/perception arrive, which also includes the concepts/archetypes of space and time)

Lifting Strength: Class 1 (Lifted a car with a kick) | Class E (Could stop and lift the moon) | Immeasurable

Stamina: Very high. Limitless with Adolla Burst (Adolla Burst grants perpetual ignition energy for those who uses it) | Same as before | Limitless

Range: Standard melee range. Up to Dozens of Meters with fire attacks, explosions and smokescreens | Same as before | Low Macroversal

Intelligence: Above Average (Proficient hand-to-hand combatant. Relies on quick thinking through his actions and tactics instead of relying on pure instinct. Was capable of deducing what type of generation Charon is based off of advice given to him by Maki Oze and Takehisa Hinawa, as well as figuring out the true nature of the Great Cataclysm)

Weaknesses: Using too much of his ignition powers will cause him to overheat and potentially start burning his body in more serious cases, albeit he can circumvent this weaknesss with Hysterical Strength/Pressure of Death. | Same as before | None notable

Devil's Footprints: Shinra awakened the ability of a Third Generation and gained the ability to ignite, control, and utilize flames from his feet. While doing so, he leaves ashes on the floor in the shape of feet, which are known as the "Devil's Footprints" (悪あく魔まの足あし跡あと, Akuma no Ashiato). Using his ability in conjunction with his fighting style, Shinra has enough force in his kick to sever a limb or destroy an Infernal's core. With his kicks, he can cause an explosion on contact to lift an object as heavy as a car high into the air. With his ignited feet, he can change the trajectory of his kicks in mid-air, allowing him to rush in with a flurry of kicks one after another repeatedly. During his fight with Burns in Fuchū Prison, Shinra's footprints evolved further with bladed talons at the edges of his feet.

Tora Hishigi: Shinra was taught by Captain Benimaru how to utilize hand signs/seals in order to redirect and concentrate the energy in his body. This allows him to manipulate the characteristics of the flames he produces from his Ignition Ability. 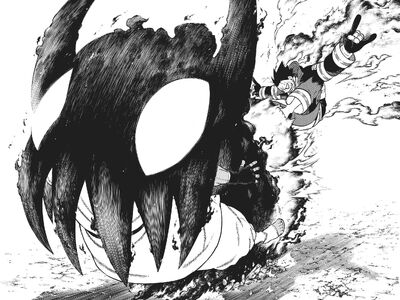 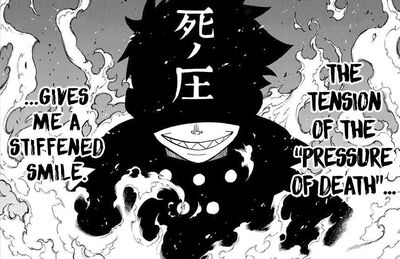 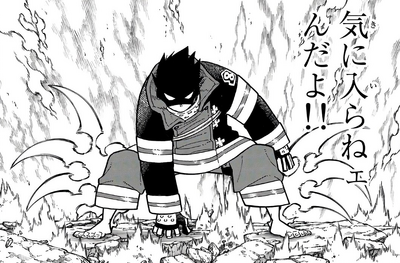 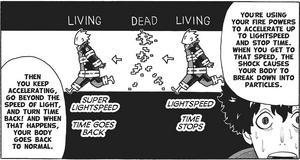 Adolla Burst: Having the Adolla Burst, Shinra can be temporarily empowered with the Adolla Grace through forcing an Adolla Link to a person who originates from Adolla, or someone graced. Under Grace, Shinra can enter a state of light speed, causing his body to split into subatomic particles in the process. The particles then surpass the speed of light, allowing them to go a few seconds back in time to the point before Shinra's body broke apart. As a result, Shinra's body is re-materialized. Doing so enables him to circumvent the laws of physics and allow him to travel at relativistic speeds without ending up dead.