All Fiction Battles Wiki
Register
Don't have an account?
Sign In
Advertisement
in: Characters, Anime Characters, Manga Characters,
and 15 more

Shota Aizawa (相あい澤ざわ消しょう太た Aizawa Shōta), also known as the Erasure Hero: Eraser Head (イレイザー・ヘッド Ireizā Heddo), is one of the major protagonists of the anime and manga series My Hero Academia. He is also a Pro Hero and the homeroom teacher of U.A. High School's Class 1-A.

Powers and Abilities: Superhuman Physical Characteristics, Acrobatics, Weapon Mastery, Martial Arts (Type 4. He is an incredibly skilled hand-to-hand combatant and fighter. He even managed to develop his own fighting style called "Binding Cloth"), Power Nullification (Shota's Quirk called "Erasure" allows him to nullify another person's Quirk by looking at the user), Limited Reactive Evolution & Accelerated Development (Quirk users have been shown to evolve or increase the strength of their quirk when in a life or death situation)

Speed: Unknown | Supersonic+ (He was able to quickly and easily restrain Shoto Todoroki with a sneak attack while being weighed down by the High Density Weights. He managed to keep up with 8% Deku), possibly Hypersonic (He managed to dodge a fire attack from one of Dabi's clones, created by Twice)

Stamina: Very High (He was able to use his Quirk even after being severely injured by Nomu)

Range: Standard melee range, up to Tens of meters via Equipment

Intelligence: Above Average (He is a very competent and strict teacher. He is also a very skilled fighter and hand-to-hand combatant)

Weaknesses: His quirk will stop working if he closes his eyes or if his eyes are obstructed from his target. If he uses his Quirk for too long, his eyes will start to dry out, forcing him to close his eyes in time. He cannot nullify Mutant-type Quirks (such as Mashirao's Tail Quirk or Mezo's Dupli-Arms Quirk). He also cannot affect the opponent's natural strength and speed, by using his Quirk. Due to the subsequent effects of the wounds he suffered during the "U.S.J. Incident", when Shota Aizawa activates and deactivates his Quirk, there is now an interval in which his Quirk must be recharged until he can use it again. In the aftermath of the "Paranormal Liberation War Arc", he lost one of his legs and now he also wears an eyepatch over his right eye.

Erasure: Shota's Quirk gives him the ability to nullify another person's Quirk by looking at the user 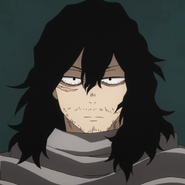 Shota Aizawa appearance after the events of the U.S.J Incident