All Fiction Battles Wiki
Register
Don't have an account?
Sign In
Advertisement
in: Characters, Male Characters, Martial Artists,
and 7 more 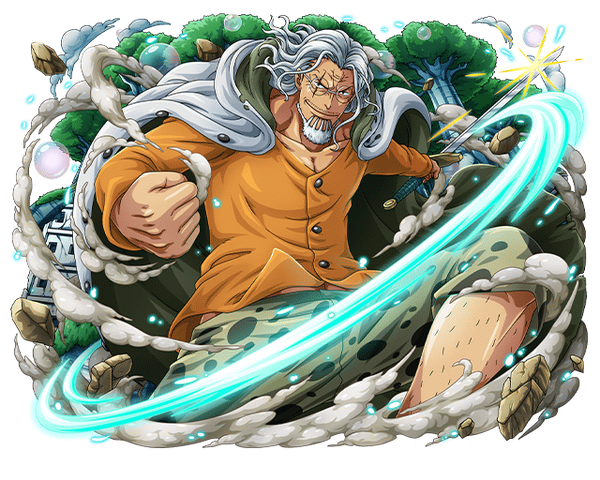 Silvers Rayleigh, the Dark King, was the first mate to the Pirate King himself, Gol D. Roger, having been recruited into the Roger Pirates well over 30 years ago. Fighting alongside Roger until the man's death and the dispersal of the Roger Pirates, Rayleigh decided to settle down on Sabaody Archipelago and become a ship coater.

After retiring to Sabaody, Rayleigh just so happened to run afoul of Monkey D. Luffy and his crew at the Human Auction Shop, having gambled himself into debt and wishing to rob whomever purchased him. Freeing himself and the captive mermaid Camie, Rayleigh eventually intercepted Admiral Kizaru and fought the man to a standstill, injuring the Admiral while taking no damage himself miraculously, in an effort to let Luffy and crew escape.

After the War of the Summit, Rayleigh sought out Luffy on the Amazon Island and took him for his apprentice, training Luffy rigorously in the art of Haki for over a year and half, and allowing Luffy to train for 6 months on his own.

Upon the Strawhats' departure from Sabaody a second time, Rayleigh intercepted a group of Marines seeking to capture them, daring any and all to challenge him and harm his apprentice. He was later seen shedding a tear for the future that he believes Luffy may bring to the world.

Stamina: Very high (Rayleigh is capable of swimming an entire ocean nonstop to reach his destination, with his own ship having been destroyed outside the treacherous Calm Belt)

Intelligence: Above Average (Has extensive knowledge iabout Haki and has dozens of years of fighting experience. Taught Luffy how to use Haki)