All Fiction Battles Wiki
Register
Don't have an account?
Sign In
Advertisement
in: Characters, The Elder Scrolls, Genderless Characters,
and 35 more 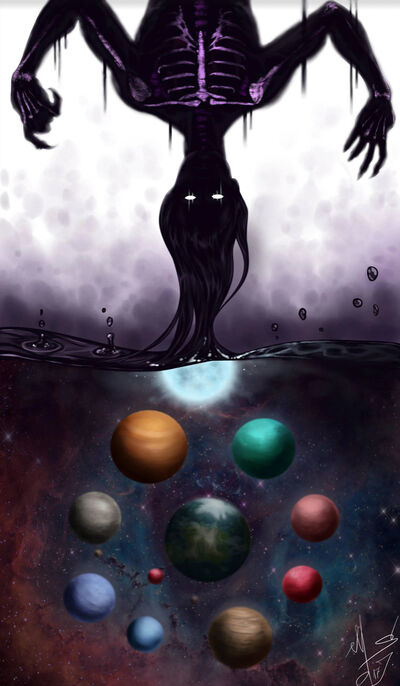 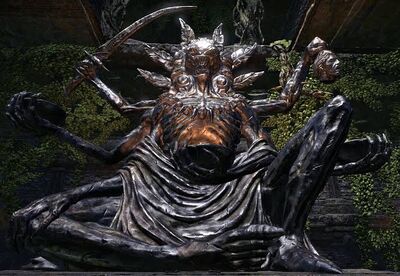 Sithis, also known as Akel, SITHISIT, Psijii, the Dread-Father, and sometimes Padomay, is a deity representative of emptiness and the Void. Other sources say that he is also a representation of utter misanthropy. He is worshipped by the Dark Brotherhood and many other cults.

Sithis is the birthed soul incarnate of Padomay and the equal yet opposite force to Anui-El, who is the birthed soul incarnate of Padomay's opposite force, Anu. The conditions Sithis and Anui-El placed on each other in their interplay would bring about the creation of what is known as the Tower, in which the realms of Aurbis, Realms Beyond, Aetherius, Oblivion, and Mundus would form. It is implied that the Daedra may have been created from Sithis. When Anui-El birthed his soul, Auri-El/Akatosh, to stabilize the then confusing and turbulent Aurbis by creating time, Sithis birthed his own soul, Lorkhan, as well. Sithis is believed to have created Lorkhan to destroy creation through trickery and deceit, and return creation to the Void.

Classification: Primordial Concept of Nothingness, The Everlasting Ineffable Dark, The Soul Padomay, Mirror-Brother of Anui-El, Father of Lorkhan, The Embodiment of non-existence, The Void

Attack Potency: High Ascendent level (Sithis is the “Soul” and an infinitesimal aspect of Padomay, he is the everlasting, ineffable Dark of Non-Existence and the Embodiment of Nothingness, that exists beyond but also encompasses the entire Tower and the endless sea of chaos that compromise the infinite Telescope of Wheels and all its higher infinities, it stands even beyond CHIM, which is considered the ultimate mortal transcendence, that completely trivialize all the unbound Et’Ada to insignificance. Is the mirror brother and equal to Anui-El, who is the ineffable Light of Existence and the Embodiment of Nothingness. It created Lorkhan, one of the strongest Et’Ada, from it’s infinite Darkness, who is merely an infinitesimal aspect of him)

Feats: Created Lorkhan and sent him to the Tower, to destroy all of existence and return all things to the Void