All Fiction Battles Wiki
Register
Don't have an account?
Sign In
Advertisement
in: Gears of War, Characters, Female Characters,
and 16 more 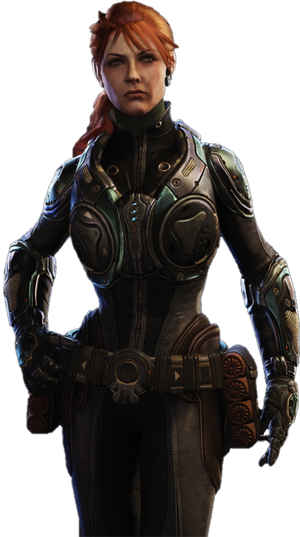 Cadet Sofia Hendrik was a Gear soldier in the Coalition of Ordered Governments Army who served in Kilo Squad. During the Pendulum Wars, Sofia was a journalist, but joined the army after Emergence Day and was sent to the Halvo Bay Military Academy in Halvo Bay where she became a cadet in the Onyx Guard. When the Locust assaulted Halvo Bay, Sofia was assigned to Kilo Squad to keep an eye on Garron Paduk. She and Kilo Squad helped defeat General Karn by disobeying orders and she left the COG to travel with Paduk. They led a group of former COG and Union of Independent Republics soldiers and civilians who lived in Halvo Bay, but she was kidnapped by former members of the COG at an unknown point, leaving her fate unknown.

Powers and Abilities: Superhuman Physical Characteristics, Weapon Mastery (Type. 1, she's extremely skilled marksmen and is highly proficient with a Snub pistol even being able to be awarded all ribbons available for it also she is a skilled fencer), Martial Arts (Type. 4, the Onyx Guards are the most well trained and the most skilled of all COG Gears), Healing and Air Manipulation (Via Stim-Gas Grenade, it release a gas that will heal anyone inside of it), Explosion Manipulation (Via Bolo Grenade), Damage Boost (Via Active Reload, if successfully done it’ll boost the damage of the remaining rounds that were in the gun before the reload), Statistics Amplification (Via Active Reload, if successfully done it’ll increase the reload speed and the fire rate of the gun).

Attack Potency: Small Building level (She's comparable to Demon Baird, Augustus Cole and Garron Paduk, she's able to cut Locusts in half with her Lancer), higher (Active Reload increase the damage of the shots that remand during the reload)

Lifting Strength: Class 1 (She's able to push a car that resembles a Sedan with the help of another COG Gear)

Durability: Small Building level (She can survive attacks from Locusts and is capable of surviving close blasts from Bolo Grenades)

Stamina: High (She can fight massive waves of Locusts without tiring at all)

Intelligence: Gifted (Onyx Guards our the best of the COG Gears and they're given the best education the COG has to offer)