All Fiction Battles Wiki
Register
Don't have an account?
Sign In
Advertisement
in: Tier 2, Tier 2-B, Characters,
and 35 more

Sorbet Shark Cookie is an Epic-class Cookie and an important protagonist in Cookie Run: OvenBreak and Cookie Run: Kingdom. Sorbet Shark Cookie was initially just a shark that longed to join pirate crews to party on their ships, however they always drove the pirates away. Presumably after having their wish granted by Ananas Dragon Cookie, Sorbet Shark Cookie gained the power to transform into a Cookie while on land, and back into their shark form in the sea. During one of their adventures across the sea, Sorbet Shark Cookie discovered Pirate Cookie's pirate ship. He had fell off the ship and was about to drown, but Sorbet Shark Cookie saved him just in time, earning a spot on the Black Sugar Pirate Ship.

"Once upon a time, there was a shark that lived in the deep blue sea. This curious swimmer often popped up to the surface to watch the pirates party on their ships. The shark yearned to join the Cookies for these parties, but they always ran away. Saddened, the shark disappeared into the sea for ages. Until suddenly... Sorbet Shark Cookie burst forth from the depths! This Cookie is, frankly, not the fastest runner, can only make bubbly noises instead of words, and gets soggy in the water just like everyone else. But even so, Sorbet Shark Cookie is always wearing a bright smile! After all, the world above the sea is vast and there's so many things to see!"

Superhuman Physical Characteristics, Flight, Magic, Transformation (Can transform into a sorbet shark or a Cookie), Acrobatics, Energy Manipulation and Plasma Manipulation (via Plasma Crystal Ball), Explosion Manipulation (via Melon Dynamite), Water Manipulation (Can create water to swim in their sorbet shark form at any time), passive Morality Manipulation (via Darkwind Quiver, it feeds on the morale of everything nearby), passive Fate Manipulation (The Divine Guardian Shield brings victory to those with a righteous cause), passive Magnetism Manipulation and Resistance Negation (Rainbow Bear Jellies are stated to be immune to magnetic effects, and Sorbet Shark Cookie is one of few Cookies able to ignore their immunity and force them to be magnetic anyways. Passively attracts Pirate Coins), Durability Negation (Shark Splash does True Damage, ignoring the enemy's defensive buffs), Dream Manipulation (via Haunted Snuggly Bear, which can eat nightmares), Petrification (The Naga's Heart and the Enchanted Mirror will petrify anything in the presence of the Eye of the Jelly Serpent), Data Manipulation and Transmutation (Coin Magic turns enemies and obstacles into coins. New PepBook can passively transform obstacles and Jellies into computer data), Homing Attack (via Carrot Missile), Forcefield Creation (Via Bubble Gum Spring Jumpers and Shield Bubble Gun), Reality Warping (Although not combat applicable, Sorbet Shark Cookie can change the battlefield's background), Healing (via Bookseller's Monocle), Resurrection (via Red Egg of Resurrection and Sugar Swan's Shining Feather), Invulnerability (Via Jelly Worm's Sticky Goo), Teleportation, Curse Manipulation (via Priestess Cookie's Paper Charm), Statistics Reduction (via Pilgrim's Slingshot), Resistance to Bone Manipulation (Gingerbrave stated that Cookies don't have bones), Extreme Cold and Cosmic Radiation (Can exist in space without any problems), Corruption, Damage Reduction (Shark Splash does True Damage, which ignores the Damage Resist effect. Damage Resist lowers the amount of damage an attack does), Disease Manipulation (Scaling from Tiger Lily Cookie, who can harm Jellywalkers with physical attacks. Cookies are mutated into Jellywalkers on contact with them, becoming a "jelly-eyed mindless monster" in the process), Mind Manipulation and Morality Manipulation (Via being able to wield the Candy Cane Staff of Darkness)

Attack Potency: At least Multiverse level (Is one of the forces required to defeat Squid Ink Cookie)

Stamina: Very high (Should scale to the other Cookies)

Standard Equipment: Sorbet Shark Cookie always has a telescope on hand. They also have their Pet, Helmsman Will, around at all times. Helmsman Will periodically spins in a set arc, destroying every obstacle it hits. They also have several different treasures and Invocation Cards on hand

Shark Splash: Sorbet Shark Cookie enters their shark form and ambushes the enemy (if there are several they will target the frontmost ones) in a wide arc by diving into the floor below them, creating several pillars of water. This move will deal additional "True Damage" that ignores defense and damage resist effects. 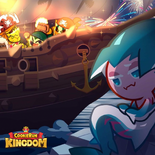 Sorbet Shark listening to the parties 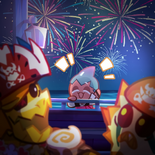