All Fiction Battles Wiki
Register
Don't have an account?
Sign In
Advertisement
in: Superhumans, Psychiatrists, Teenagers,
and 26 more 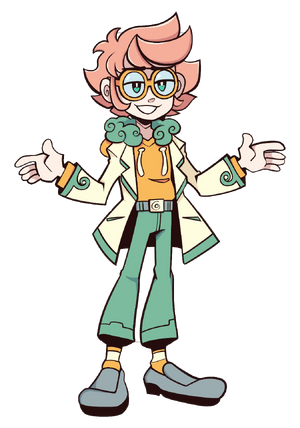 Dr. Sylvester "Sylvie" Ashling is a 15-year-old psychologist who investigates interactions between epithets and the human psyche. After overhearing Indus talking about the Arsene Amulet, he stayed in the Sweet Jazz City Museum so that he could find and study it.

His epithet, "Drowsy", lulls his targets to sleep using a cloud of pollen-like dust. From there, Sylvie can bring their dreams to life. Notably, Sylvie can also use his epithet on himself, allowing him to transform into a giant Minotaur-like being called Dr. Beefton.

Superhuman Physical Characteristics, Consumption (Characters in Epithet Erased can eat inorganic objects such as screws and pinecones), Accelerated Development (Continuous use of epithets cause them to grow stronger), Limited Regeneration (Mid-Low, you regenerate your broken bones and energy after winning a battle), Immortality and High Pain Tolerance (Type 6 (for Immortality), Mera's bones breaking and Sylvester getting his ribcage broken were viewed as -1 damage, and Giovanni was unaffected by having "several broken bones", according to WOG, characters in Epithet Erased are extremely difficult to kill as they can easily shrug off attacks that would be lethal due to running by JRPG mechanics), Aura (Those who are inscribed have an aura around them), Fragrance Manipulation, Sleep Manipulation (Sylvester Ashling's epithet, Drowsy, can make anyone his dust touches fall asleep, causing them to collapse on the spot, and all of his abilities use this dust. He can also make himself fall asleep), Summoning (Sylvester can summon hundreds of sheep which are merely dreamt creatures, being able to attack his opponent through biting them), Fear Manipulation (His epithet can show one's greatest fear once they're struck by his dust. Mera using it can change the view of one's fear, implying Sylvester can change how it looks and works to induce further fear into his opponent), Dream Manipulation, Subjective Reality, Power Modification, Power Bestowal (He can turn one's dreams, fears, and his own thoughts into real things and change them, and they can affect others, while also imbuing his Epithet into those objects)

Power Absorption, Power Nullification, and Power Bestowal (The Arsene Amulet can steal one's epithet, which is a part of one's being and their soul, along with the aura of said epithet, and can grant people epithets)

Attack Potency: Street level (Comparable to Giovanni Potage and could tank hits from Mera Salamin), Wall level as Doctor Beefton (Beefton was stated to be immune to any damage from Giovanni Potage, which would include his Critical 13, easily broke through Mera's epithet. Was doing severe damage to both Giovanni, Molly, and Mera)

Stamina: Superhuman (Has one of the highest stamina ratings in the show thus far, only beat by Howie Honeyglow)

Intelligence: Genius (Sylvester is a skilled psychologist and student at the age of 15, runs a popular business focused on epithet-related issues, and even at his age, he can use his epithet at a high skill level more than older characters are able to)

Weaknesses: His dust needs to affect the opponent in order to use Nightmare Fuel on it. Doctor Beefton will dissipate if Sylvester wakes up.