All Fiction Battles Wiki
Register
Don't have an account?
Sign In
Advertisement
in: Characters, Female Characters, Protagonists,
and 22 more 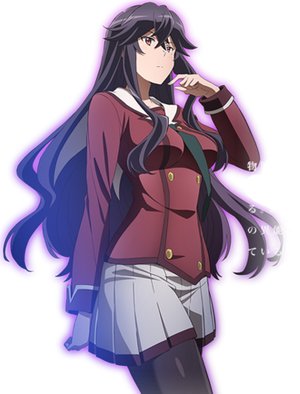 Sayumi Takanashi is one of the main characters of Inō Battle wa Nichijō-kei no Naka de. She is a very refined girl that is normally seen reading books. Her other hobbies includes ikebana, origami and martial arts.

Throughout the series so far she acts mature and regal, but when it comes down to sexual and perverted fan service moments, she acts like a shy, embarrassed girl.

Tier: At least 10-B, Unknown with Ouroboros Circle

Powers and Abilities: Martial Arts (has practiced martial arts, being a black belt in both karate and judo), Causality Manipulation (Via ; This allows her to return anything to its original state, including people or objects.), Subjective Reality (Via ; the way in which things return to their original state depends on Sayumi's subjective thought), Conceptual Manipulation (Type 2; Ouroboros Circle can return the concepts to their ideal form), Reality Warping (Consequent to conveying her feelings to Jurai and trying to make the feelings she has for him take shape in the world as "their ideal form", she mistakenly altered the entire reality of the world.), Age Manipulation (Due to altering the entire reality of the world - She made Chifuyu become a high school student), Transmutation (Due to altering the entire reality of the world - She changed Tomoyo's appearance and made it as if it was normal and transformed Sagami into a girl) Teleportation (via Ouroboros Circle; Can return whole areas to their natural state of being - teleporting people by restoring areas to their original state), Matter Manipulation, Healing (Via ; was able to regenerate Andou's arm)

Attack Potency: At least Human level (Shown to be an extraordinary fighter due to her martial arts), Unknown with Ouroboros Circle (It is said to be the power that altered the reality of the entire world)

Weaknesses: Root of Origin will only work if Sayumi believes that the current state of the target is not its original state.