All Fiction Battles Wiki
Register
Don't have an account?
Sign In
Advertisement
in: Adults, Leaders, Military Characters,
and 62 more 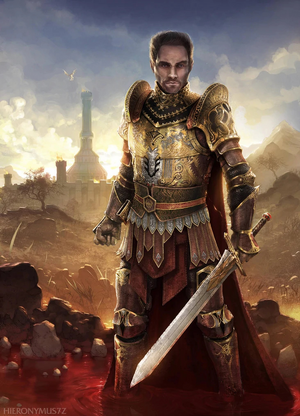 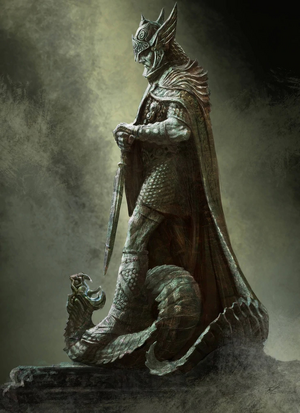 You have suffered for me to win this throne, and I see how you hate jungle. Let me show you the power of Talos Stormcrown, born of the North, where my breath is long winter. I breathe now, in royalty, and reshape this land which is mine. I do this for you, Red Legions, for I love you.

Septim's no Cyrodiil from what I've heard, though he rules their remnants and rebuilds their Empire; he's something worse, or greater, depending on your disposition to the center sun. [...] For the last four hundred years the petty kings of Cyrodiil have been squabbling over the title of Emperor, all claiming forbearance -- Imperial throne's blood's thinner than a sea dream and half as wet. Tiber Septim took the throne as he took our people's.

Talos, later crowned as Tiber Septim, is the Dragonborn Emperor who conquered the nations of Tamriel during the late Second Era, ending the Interregnum that had scarred the continent for over four hundred years. His efforts unified the disparate lands of Tamriel under his banner, marking the birth of the Third Empire of Man, and with it the beginning of the Third Era. Talos is the progenitor of the Septim Dynasty that would inherit the Ruby Throne and rule over Tamriel for the next few centuries, in what is considered to be one of the most relatively peaceful periods in the continent’s history. Talos was so revered in life that upon death he was placed on the Imperial Pantheon, becoming the Ninth Divine.

Name: Talos Stormcrown, Tiber Septim, Hjalti Early-Beard, Ysmir Wulfharth, Zurin Arctus, TAL(OS), The Many-Headed Talos, The Two-Headed Ruling King, The Heir to the Seat of Sundered Kings, The Red King, The Dragonborn Emperor, The Scion of Emperors, The King of Earth and Sky, The Lord of Shining Hosts, The Protector of Oathman, Feeman and Yeoman, The Guarantor of Right and Justice, The Broad Blessing of Thrones and Powers, The Cynosure of Celestial Glory

Gender: Male | Inapplicable (As a CHIM user transcends all possible interactions of the concept of “Gender”)

Superhuman Physical Characteristics, Martial Arts, Weapon Mastery, Magic, Reality Warping (All Magic comes from the act of an individual exerting changes upon reality in accordance to their Will), Tonal Manipulation (Through Tonal Magic such as the Thu'um, he can control and influence the underlying tones which compose the fundamental layer of reality, changing and adding to the Song of Creation itself), Possesses Magic, which includes: Energy Manipulation, Weather Manipulation, Electricity Manipulation, Air Manipulation, Flight / Levitation, Acausality (Type 4; As a Shezarrine, Hjalti is fully unaffected by the Dragon Breaks, being capable of existing normally even within severe ones such as the Middle Dawn, which affected the whole of Mundus), Resistance to Spatial Manipulation & Time Manipulation (As a Shezarrine, he is immune to the effects of Dragon Breaks)

All previous powers and abilities on an unfathomably higher scale, plus CHIM user physiology, Beyond-Dimensional Existence, Regeneration (High-Godly; Can hold himself from being Zero-Summed from the Dream through sheer force of Will), Transduality (Type 2; Through CHIM Talos transcends all duplicity and opposition, standing above all dual concepts), Conceptual Manipulation (Type 1; Can alter and shape the underlying structure of the Dream of the Godhead at will), Tonal Manipulation

Attack Potency: Multi-Continent level (Superior to the full might of the Greybeards, who shook the world with the power of their Voice. Stronger than King Wulfharth) |Possibly Low Macroverse level (Is comparable to The Dovahkiin, who is constantly compared to Tiber Septim as a Dragonborn throughout their journey. According to Neloth, the Dovahkiin became the second most powerful Dragonborn of all time after gaining the power contained in Hermaeus Mora's Black Books, and Tiber Septim is likely to be the sole Dragonborn above him. Could rewrite history and erase events out of time with his Thu'um) | High Hyperverse level (Ascended to Godhood by using the heart of Lorkhan, taking his role as the Missing God of Change, and becoming the embodiment of the concept of Space that gives form and stabilization to the entire Wheel of Aurbis and it’s infinite higher dimensions) | Ascendent level+, likely High Ascendent level (Ascended to the state of CHIM, CHIM users exist on a “Non-Spatial realm” beyond the Void of Oblivion, which contains infinite higher dimensions. CHIM means, transcending all of existence and its boundaries, seeing the Tower of Wheels "sideways", the Eternal I, this would mean, seeing even an Infinite-Dimensional construct, such as the Aurbis, as being 1 Dimensional, by realizing that all of existence is merely the Dream of the Godhead, once ascended to CHIM, Talos is freed from all restrictions and limitations. Transcending the Infinite Telescope of Wheels, each Wheel preceding the creation of Space and Time by Lorkhan and Akatosh, representing higher infinities which lacks completely from the notions of “Time angles”, referring to Spatial-Temporal Dimensions. And is able to control at will the Dream of the Godhead, and it’s layers, including the entire Aurbis and the Telescope of Wheels)

Speed: At least Massively Hypersonic+ Combat and Reaction Speed (Should be superior to Odahviing, who can cross Skyrim in seconds, and should also be much faster than skilled Ansei who can react and swing their swords in microseconds. Should be comparable to powerful mages who can cast, and react to lightning-based spells) | possibly Immeasurable (Should be comparable to The Dovahkiin in speed. His Thu'um was fast enough to hit a moving Sunbird of Alinor, a vessel capable of flying from Nirn to Aetherius) | Immeasurable | Irrelevant (Fully Transcendent over Dualism and the Concepts of Space and Time across the entirety of existence), Omnipresent across the Tower Of Wheels (Upon perceiving the Tower of Wheels "sideways", The Eternal I, Talos became one with the whole of the Tower as Individuality is illusory and all is merely the Dream of the Godhead, but was able to maintain his sense of Self through CHIM, simultaneously existing as one with everything but also as an Individual Being)

Durability: Multi-Continent level (Completely unscathed by the full might of the Greybeards, who shook the world with the power of their Voice) | Unknown, likely Universe level+ | High Hyperverse level | High Ascendent level

Stamina: Superhuman (A master of the Way of the Voice, and an incredibly strong warrior who fought at the forefront of his armies in many battles. Slip his own throat, and not only survived, but stayed conscious and was still capable of walking) | Unknown | Infinite | Infinite

Range: Standard Melee Range, up to Planetary with the Thu'um | Unknown | High Hyperversal | Meta-Ascendental (Should be comparable to Vivec, who was able to reach the Dreamsleeve through CHIM, which is the deepest level of the Dream of the Amaranth)

Standard Equipment: The Imperial Dragon Armor, The Amulet of Kings, The Mantella, The Totem of Tiber Septim | None Notable

Intelligence: Genius (Hjalti is a great warrior and a brilliant military tactician, leading the armies of King Cuhlecain and standing as an undefeated general at the age of twenty. A cunning leader and a shrewd diplomatic, who unified the petty warring kingdoms of Cyrodiil under his banner, and also convinced the last remaining dragons on Tamriel to fight by his side. An incredibly charismatic and manipulative man, capable of tricking others into doing his bidding, and making them act as his political pawns. Mastered the Way of the Voice through the teachings of the Greybeards and King Wulfharth. | Same, though honed and sharpened by decades of experience as the Emperor of Tamriel, both militarily and politically. Possesses all the knowledge and intellect of Zurin Arctus and Ysmir Wulfharth, including the former's arcane wisdom and unrivaled magical abilities, and the later's literal millennia of experience as a warrior | Nigh-Omniscient (Able to fully understand the nature of the Tower in its totality, the Dream of The Godhead and it’s boundaries, perceiving that everyone, from mortals to even Gods, are nothing more than illusory constructs in the mind of an indifferent God)

Feats: Ascended to Godhood and mantled Lorkhan, taking his role as the Missing Ninth God of Change, and thus becoming one with his disembodied Spirit, Attained the state of CHIM, transcending all of existence and its boundaries, with the help of The Warrior Poet Vivec, fought The Numidium