All Fiction Battles Wiki
Register
Don't have an account?
Sign In
Advertisement
in: Fire Force, Characters, Female Characters,
and 16 more 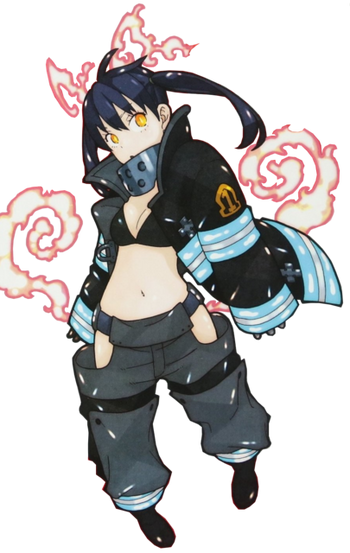 Powers and Abilities: Superhuman Physical Characteristics, Acrobatics, Transformation (Using her ignition power she can form cat-like ears and tails out of fire), Fire Manipulation (She can create ears and tails out of fire, she can surround people with her tails), Creation (As a Third Generation, she can create fire from nothing), Enhanced Senses (she can sense danger), Pain Tolerance (Type. 1, she could take multiple hits from Rekka, then an attack from his fire and still be able to move), Resistance to Fire Manipulation and Heat Manipulation (All Second and Third Generations have a resistance to fire and heat).

Attack Potency: Town level (She can damage infernals that Maki can attack)

Lifting Strength: Class 1 (She should be comparable to Shinra)

Durability: Town level (She can take attacks from infernals)

Nekomata: Tamaki ignites pink fire around her body in the shape of cat ears, two forked tails, and flames on her fingertips which increase their speed and mobility substantially. Through this process, she is granted the ability to surround her target with flames or use such flames as an offensive force via the two tails. The tails can also be extended to high lengths, for such things as sending a distress signal.