All Fiction Battles Wiki
Register
Don't have an account?
Sign In
Advertisement
in: Demon Slayer, Characters, Male Characters,
and 42 more 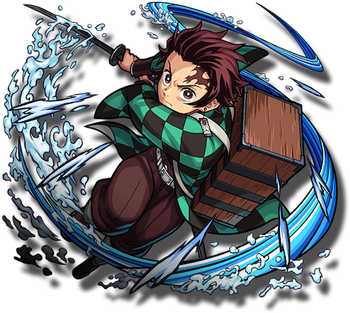 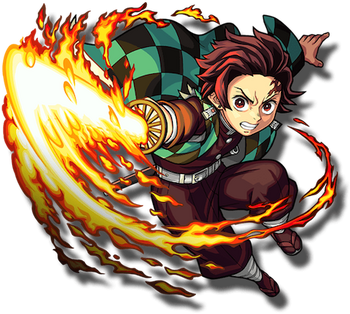 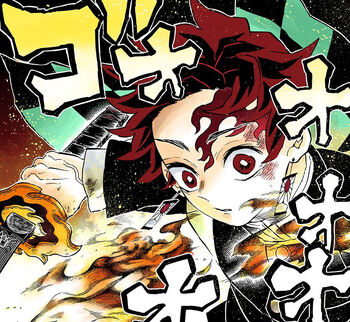 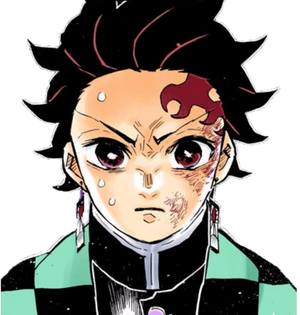 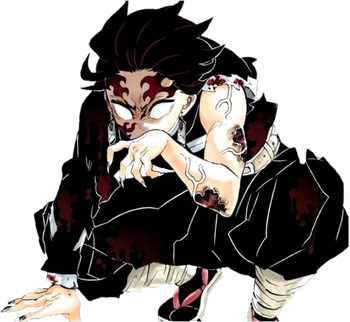 Tanjiro Kamado has taken it upon himself to support his family, ever since the death of his father. Although their lives may be hardened by tragedy, they've found happiness. But that ephemeral warmth is shattered one day when Tanjiro finds his family slaughtered, and the lone survivor, his sister Nezuko, turned into a demon. To his surprise, however, Nezuko still showed signs of human emotion and thought, thus he embarked on a quest to fight demons and find a cure for his sister and make her human again.

Superhuman Physical Characteristics, Enhanced Senses (He has an extremely strong sense of smell), Weapon Mastery (Type. 1, he's skilled with an axe), Acrobatics (When he first starts his training he displays a decent skill in acrobatic while evading the traps).

All previous abilities, Precognition (Type. 2, he can see a thread when he's able to kill someone), Extrasensory Perception (His smell is so strong he could even smell an attack from underground), Clairvoyance (Can recognize and smell things normally impossible, such as the smell of the demon who killed his family years after the event, he can smell someone's feelings), Martial Arts (Type. 2, he was skilled enough to take on Inosuke and counter most of his attacks), limited Empathic Manipulation and Morality Manipulation (His spiritual core was so warm and bright that it swapped the heart of someone attempting to kill him in his subconscious), Weapon Mastery (Type. 1, he's skilled with his Nichirin Blade), Rage Power (He can become filled with rage in stressful situations or if someone hurts innocent people), Information Analysis (He can smell the weakness of his target), Pain Tolerance (Type. 2, he can continue to fight while having multiple broken bones), limited Absorption (The ore of his Nichirin Blade absorbs sunlight), Statistics Amplification (Breathing techniques make the user become much stronger and faster, Constant Flux gradually increases the strength of his strike with each blow, increases his speed with Flash Dance), Regeneration Negation (Up to High-Mid; with his Nichirin Blade it can stop the regeneration of demons), Accelerated Development (He was able to get to the Pillar level skill much faster than normal person), Resistance to Fire Manipulation, Water Manipulation and Heat Manipulation (Demon Slayer Corps Garbs protect against fire, water and cold), Fear Manipulation and Paralysis Inducement (Withstood Rui’s aura, which his aura was implied to be similar to Shinobu’s, which caused intense shuddering and lack of air).

All previous abilities, Body Control and Regeneration (Low; he can slow the bleeding of a blood hemorrhage), Resistance to limited Sleep Manipulation (Escaped a deep sleep by killing himself in his dream to escape sleep), limited Poison Manipulation (Could continue to fight despite being struck by with Gyutaro's deadly poison for extended periods of time).

All previous abilities, Precognition (Type. 1, he predict a characters movements with his sense of smell), Social Influencing (Persuaded the naturally aggressive Genya to work with him just with the innocence of his eyes), Reactive Power Level (He gets faster the longer the he fights), Resistance to limited Sound Manipulation (Took powerful soundwaves).

Possibly all previous abilities, Immortality (Types 1, 2 and 3, Demons don't age, he'll continue to regenerate even if he's cut off by a Nichirin Blade), Regeneration (High-Mid; Even after being reduced to a decapitated head, a low-level demon would have still been capable of regenerating if his head were to be "completely crushed"), Body Control (A low-level demon could grow hands from it's head after it lost its body, Grew a new arm), Body Control (Can generate tendrils like Muzan), Energy Projection (Generated an energy ball from his mouth), Shockwave Creation (Like Akaza, he can generate shockwave attacks), Berserk Mode (Tanjiro has no sense of himself in this form attacking anyone who comes near him), Resistance to Disease Manipulation (Demons can't catch illnesses), Regeneration Negation (Up to High-Mid; Giyu stated that Red Nichirin Blades have no effect on him).

Stamina: High (Constantly keeps pushing himself to the limits of his stamina, fights multiple demons without rest even while having multiple injures and broken bones) | Infinite (Demons don't tire)

Intelligence: Gifted (Tanjiro is incredibly analytical, even against opponents that heavily outmatch him in multiple categories, Tanjiro is capable of creating strategies to beat an opponent on the in the midst of a fight and in danger even if it results in his own death. Upon seeing a fighting style once, Tanjiro can analyze it, and it’s even possible for him to accomplish such a feat even in the midst of a constantly shifting location where he lacks any environmental advantage or benefit. Even if the opponent offers no real details or specifics on their power, Tanjiro can pick up subtle phrases and words used throughout their fights to deduce the ability. He's even created a new abilities and utilized them effectively upon using them once) | Animalistic

Weaknesses: Cannot use Sun Breath techniques more than a few times without exhausting himself, doing so after using Breath of Water techniques wrecks havoc on his body and Demon Slayer Mark takes a toll on his stamina | Wisteria Flower

Water Breathing: is one of the five main Breathing Styles directly derived from the Sun Breathing. The Water Breathing mimics the element of water, specifically the flow and flexibility of the liquid and infuses it with the users swordsmanship.

Sun Breathing: is a style of swordsmanship utilized by the first Demon Slayer to use "breaths", Yoriichi Tsugikuni, and serves as the basis for other Breathing Styles derived from it as a result of Yoriichi changing the breathing techniques to suit the individuals he taught. The Sun Breathing combat style seemingly mimics the burning effect of sunlight on demons and replicates it with the users special swordsmanship and movements.

See-Through World: Through becoming aware of every part of his body, and "closing" any unneeded actions out like one would close their eyes when trying to hear something, Tanjirou can enter the "see-through world." His speed and strength increase dramatically, and he becomes capable of seeing through an enemy, becoming able to observe every muscle, blood vessels, lungs, and all their contractions. In this state, his battle spirit, emotions, and intent are impossible to detect.

Kirito (Sword Art Online) Kirito's Profile (Both were 8-A, SBA was used)