All Fiction Battles Wiki
Register
Don't have an account?
Sign In
Advertisement
in: Genshin Impact, Characters, Rich Characters,
and 25 more 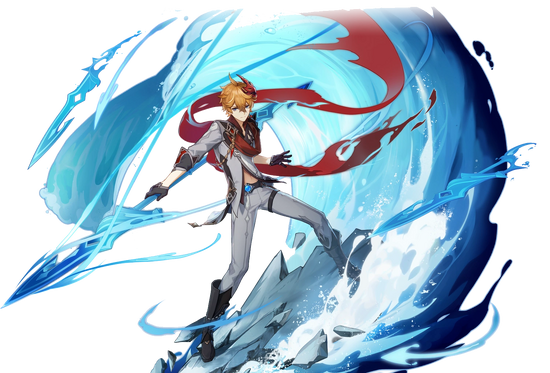 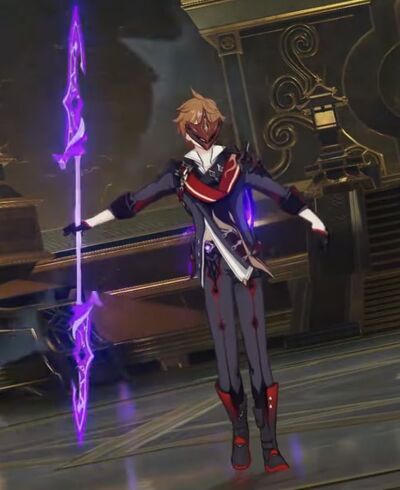 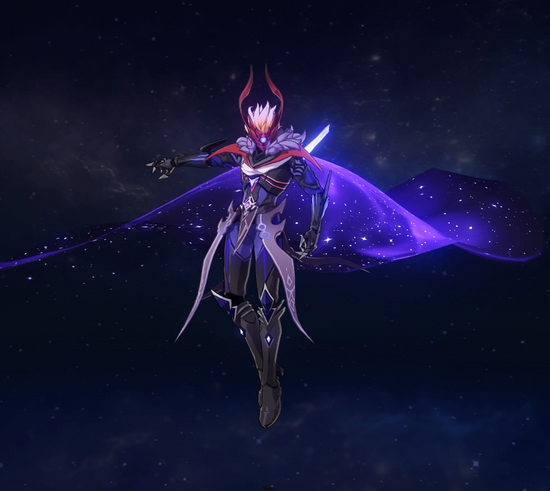 Tartaglia, birth name Ajax and most commonly referred to as Childe or Nobile, he's from Snezhnaya, is the Eleventh of the Fatui Harbingers and the Tsaritsa's personal weapon of war. He is the newest member of the Eleven Harbingers of the Fatui. Following danger wherever he goes, Tartaglia is always eager for a challenge, which makes him extremely dangerous despite being the youngest member.

A Master of all forms of weaponry except the bow, he continually seeks greater power regardless of the cost involved and respects all those who can keep up with him in battle. He is the main antagonist of the Liyue Chapter, although we later learn that he was merely an unwitting puppet in a plan devised by Zhongli.

Powers and Abilities Superhuman Physical Characteristics, Weapon Mastery (Tartaglia is a recognized master of all forms of weaponry, his only weakness being the bow and for that very reason he uses the bow as his main weapon, in order to master it), Limited Surface Scaling (He was able to move through the water without sinking), Magic, Water Manipulation and Electricity Manipulation, Creation (Tartaglia can create Hydro and Electro constructions, usually also weapons that he uses directly or that rain down from above), Summoning and Telekinesis (Tartaglia can freely summon and telekinetically move his primary weapon), Transformation, Statistics Amplification, Elemental Intangibility and Limited Flight (Tartaglia can transform into hydro and electro energy for greater mobility, speed and flight), Forcefield Creation (Depending on the phase he is in, tartaglia can create Hydro or Electro shields respectively to defend against attacks), Status Effect Inducement and Damage Boost (Tartagtalia's charged attacks with the bow, attacks with critical damage while his elemental ability is active, mark the enemy with "Riptide" which causes them to erupt with damaging Hydro energy), Limited Paralysis Inducement (Electro charged reaction, binded the target momentarily for a few seconds), Energy Absorption (Tartaglia can drain the energy of enemies affected by Raptide, and also when switching to the elemental skill dealing a small AoE dmg),Transformation and Statistics Amplification (With Foul Legacy Transformation), True Flight (while transformed, tartaglia is able to fly without needing to transform into an element), Teleportation (Tartaglia can instantly teleport to his enemy with Blink), Homing Attack (Tartaglia can send attacks to the target location with Judgement), Limited Power Nullification (With Sigils of Permission. Tartaglia used it to break the seal on Osial in Guyun Stone Forest) Resistance to Water Manipulation and Electricity Manipulation (with his Vision and Delusion).

Attack Potency: At least Small City level, likely City level (Tartaglia is considered one of the most powerful and dangerous Harbingers in combat, with him being referred to as the Tsaritsa's weapon of war, likely making him superior to Signora who managed to stomp venti because she possessed the power of Archon Cryo and caught him off guard)

Speed: Massively Hypersonic (He should be inferior to Zhongli, and superior to most of the characters shown)

Lifting Strength: At least Peak Human (Tartaglia can effortlessly wield the rust, which is described as so heavy that a normal person would not have enough strength to lift it, let alone fire it), possibly Class K (Teucer claimed that Tartaglia once brought home a giant fish about two hundred times the size of Paimon by himself)

Stamina: Very High. Despite being heavily injured and still recovering from his overuse of Foul Legacy in the past Liyue Chapter, he was capable of easily defeating a large group of Fatui recruits, several of Dottore's Ruin Guards, and even use the Foul Legacy Transformation again to destroy a group of four Ruin Guards in under 10 seconds

Intelligence: High, Genius combatant (It is said that at the age of 14, Tartaglia mastered all forms of weaponry except the bow in only 3 months of training in the Abyss. That same year he was recruited by the Fatui, as his father hoped military life would tame him, but young Ajax began single-handedly crushing fully trained and armored soldiers with ease. His prowess on the battlefield is attributed in part to his skill as a tactician and strategist, carefully forming his plan of attack based on observations of his immediate situation and the abilities of his opponent. In the battle against the Traveler, he demonstrated a clear superiority in skill, despite the Traveler's years of experience over an unquantifiable amount of time as an immortal who travels between worlds)

Weaknesses: The Foul Legacy Transformation is quite taxing on Tartaglia's body, causing him severe injuries in only a few minutes of usage the aftereffects of having used it are still present even weeks after the events of the Liyue Chapter. Even when he only used it for 10 seconds to defeat the guardians of ruin, it left him in a deplorable state where he could barely move and stand upright

Hydro Vision: A Vision is a gift from the gods of Teyvat that allows humans to wield elemental powers, turning them into Allogenes. Tartaglia's Vision is Hydro-attributed, thus granting him the ability to freely manipulate water. He can use it to shoot torrents of water, cause water jets to shoot from the ground, inflict statuses, create weaponry, and enhance his arrows.

Electro Delusion: A counterfeit Vision created by the Tsaritsa known as a Delusion. Unlike his Vision, his Delusion is Electro-attributed, thus granting him the ability to freely manipulate electricity. He can use it to fire streams of homing lightning, transform into electricity to boost his speed, create weaponry, and synchronize with his Hydro abilities to produce elemental reactions.

Tartaglia fires a powerful Hydro-imbued magic arrow, dealing AoE Hydro DMG and applying the Riptide status. Also it returns a portion of its Energy Cost after use

Tartaglia performs a slash with a large AoE, dealing massive Hydro DMG to all surrounding opponents, which triggers Riptide Blast

Riptide: A status that Tartaglia can inflict with his elemental attacks produces additional effects when afflicted enemies are attacked in specific ways. The impacts on enemies affected by Riptide are as follows: