All Fiction Battles Wiki
Register
Don't have an account?
Sign In
Advertisement
in: Tier High 1-A, Reality Warpers, Magic Users,
and 24 more 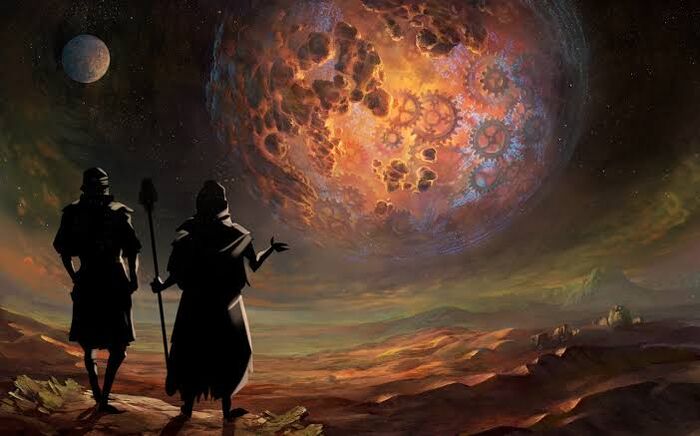 The Amaranth, also known as The Godhead or simply God, is the supreme, ultimate being which lies beyond the boundaries of existence, dreaming all of the Aurbis. Less of a being, and more of an abstract force, the Amaranth is the Final Subgradience, the limitless state of pure freedom and unity, the death of all limits and restrictions attained when two Ruling Kings of the Aurbis enter a state of sensory deprivation, destroying the underlying concepts of Duality and Selfhood which seemingly unbind them and dissolving into a single, unified whole through the joy of dissolution, stepping beyond the last bridge of existence and becoming themselves the Godhead which dreams all things into being, holding every being, race and idea as facets of itself, and reflections of its memories and consciousness.

Name: I, The Amaranth, God, The Godhead, The Nu-Men, Tsaescence, The Dreamer, The Dream Maker, Love Lies Bleeding, The House of WE, The Final Subgradience.

Gender: Inapplicable. (All possible notion of the concept of “gender” came from it’s imagination, and it’s contained by its dream)

Age: Inapplicable. (All possible notion of the concept of “time” came from it’s imagination, and it’s contained by its dream)

Classification: God. The Last Existence. The Eternal I. The Everlasting Hypnagogic.

Attack Potency: High Ascendent level (Beyond the Aurbis, CHIM and all AE, lies the boundless final state of existence, The Amarath, which is devoid from all limitations and restrictions, which dreamed the entirety of the setting, all its laws, concepts, ideas etc. completely devoid of all illusions of duality and causality, the boundless and indivisible state of limitless and indescribable Consciousness from which all ideas, numbers, phenomena and possibilities spring into being, outside of all else but Its own unbound consciousness. Every conceivable ideia came from it’s imagination, every notion of size and geometrical scale, all possible and impossible mathematical hierarchies, “existing” beyond all constructs in The Elder Scrolls setting, perceiving then as nothing more than mere illusory and imaginary constructs, even the Dreamsleeve which is devoid from all possible and impossible forms and space and time, and contains all creation and magic in form of information, it’s still part of its endless dream, with even Anu and Padomay who are conceptually above the ideia of spatial-temporal dimensionality on every way, being merely the most fleeting and minuscule avatars of its infinite consciousness)

Speed: Omnipresent (Holds all aspects of existence as facets of itself, being the all-encompassing Eternal “I” from which all ideas and possibilities are dreamed into being, encompassing all of the Aurbis until the Dreamsleeve, at the same time existing beyond both), likely Inapplicable (The Amarath transcends both Anu and Padomay on a conceptual level, Anu being the eternal and infinite Stasis and stabilization, with Padomay being the eternal and infinite Change and movement, in this way, The Amarath doesn’t “move” nor is “static”, The Amarath simply “Is”)

Range: High Ascendental (Encompasses all structures in The Elder Scrolls setting, at the same time it “exists” completely above them, dreaming all of creation as lower plane from it’s perspective)

Intelligence: Inapplicable. The Amaranth is the fully impersonal and featureless unity devoid of all characterization, being the state of Infinite "Zero" from which all springs, rather than a sentient entity on its own.

Feats: Created all concepts and structures of The Elder Scrolls setting in it’s entirety