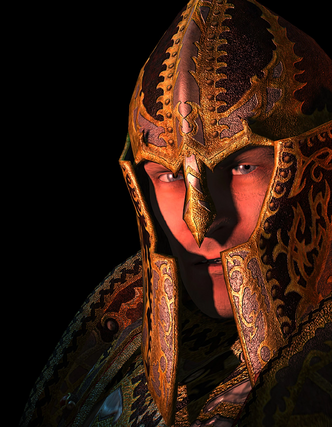 Champion of Cyrodiil, also known as the Hero of Kvatch, Savior of Bruma, Divine Crusader, or Madgod of the Shivering Isles. Released by chance from prison in the Imperial City, this hero's tale began as a courier for Uriel Septim VII and ended in the salvation of all Tamriel from the forces of Mehrunes Dagon. The Champion saved Tamriel again by reuniting the Relics of the Divine Crusader and defeating Umaril the Unfathered. This hero even visited Sheogorath's realm of insanity to battle the Daedric Prince Jyggalag, ending an eons-long cycle of order and chaos, becoming the new Sheogorath, Prince of Madness.

Gender: As a Prisoner the Champion is a being who is simultaneously of every race, every gender, and who walks all paths.

All previous Abilities and Resistances enhanced, Void Manipulation (Able to completely erase the Daedric soul of Umaril, completely erasing him from all realms of existence)

Attack Potency: Large Star level (Was able to defeat Mankar Camoran who Created a pocked plain/dimension on oblivion which was large enough to contain a Star and Mankar Camoran was sustaining said realm, which started to collapse the moment he was killed) | Multi-Solar System level (On the same level to Umaril the Unfathered, and above Ayleid Sorcerers like Houtern and Myndhal who created a pocked dimension containing Stars and Nebulae and maintained it) | High Hyperverse Level (Manteled and became Sheogorath and Defeated Jyggalag the Daedric Prince of Order and the opposite and equal to Sheogorath).

Range: Standard with weapons, Up to hundreds or thousands of Kilometers with magic | High Hyperversal

Intelligence: Gifted (Bested Multiple skilled opponents including Mages like Mankar Camoran and Manimarco, Can become the GuildMaster of the Fighters guild, Archmage of the mage's guild And An incredible Thief capable of Infiltrating the White Gold Tower and steal an Elder Scrolls | Nigh-Omniscient)

Feats: Defeated Mankar Camoran at his best, became the new Pelinal and defeated Umaril, Fought and won in single combat against the Daedric prince of order and became the new Daedric Prince of Madness