All Fiction Battles Wiki
Register
Don't have an account?
Sign In
Advertisement
in: Tier 1, Tier 6, Tier 7,
and 64 more 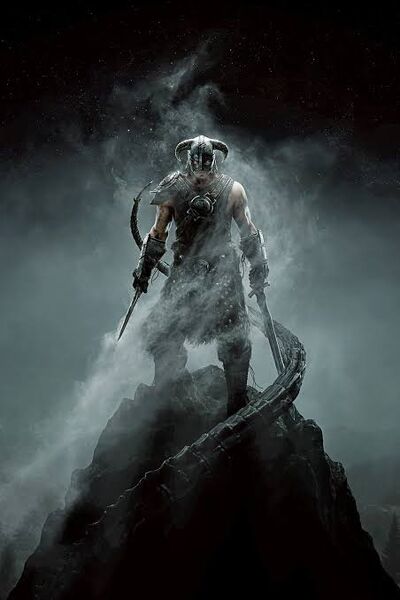 A Dovahkiin (or Dragonborn) is a mortal blessed with the Blood and soul of a dragon by Akatosh, the Father of Dragons and chief of the Divines. Those with the blessing have an extraordinary aptitude in the use of the thu'um, being able to absorb knowledge of shouts directly from the souls of slain dragons. This ability breeds fear and hatred in dragons, as the removal of their soul severs their immortality and renders them beyond the reach of any necromancy. The first known Dragonborn was Miraak, a dragon priest of the Merethic Era who used the thu'um in an unsuccessful revolt against his masters. However, the title itself is most often associated with the "Dragonborn Emperors" of Tamriel, who were in a divine covenant with Akatosh which maintains the barriers between Mundus and Oblivion.

With the return of the dragons in 4E 201 came the emergence of the first Dragonborn hero since Tiber Septim to be summoned by the Greybeards for training. In the fulfillment of an ancient Akaviri prophecy, this Last Dragonborn learned to master the thu'um to battle Alduin. Eventually, the Dovahkiin would learn the Dragonrend Shout through an Elder Scrolls, allowing them to witness the Thu'um be used against Alduin himself in the Merethic Era. Armed with their new knowledge and power, the Dovahkiin faced the World-Eater in one final battle. First, they fought atop the Throat of the World, and then later in the Realm of Sovngarde after Alduin fled to gain strength by gorging on the souls of the dead. Together with the aid from the spirits of the very ancient heroes who first defeated Alduin eons before, the Dovahkiin was able to slay the World-Eater completely and utterly, saving Nirn and the entire Mundus from destruction and breaking the Kalpic Cycle in the process.

Name: The Dovahkiin, The Last Dragonborn, Ysmir, The Dragon of the North, "Hjalti", "Stormcrown"

Gender: Varies. As a Prisoner, the Dovahkiin is a quantum-being who is simultaneously of every race, every gender, and who walks all paths.

Age: Unknown | Beyond the concept of “time”

Attack Potency: At least Small City level+, likely higher (Slayed a dragon in single combat, a feat thought impossible by the regular warriors of Skyrim. Dragons are legendary beings of immortal might and vast magical power, and should far exceed the power of average Nordic Tongues, who can manipulate the weather and summon storms with their Thu'um, as well as several other types of mages who can do the same) | Multi-Continent level (Comparable to, if not entirely superior to the full might of the Greybeards, who shock the world with the power of their Voice. Can use the Storm Call Thu'um at the Throat of the World) | Low Macroverse level (Fought and defeat Alduin in personal combat, slaying the World Eater completely, with their death reverberating across all of time through all Eras of the world, Alduin was devouring the continuous linear time of Mundus, which is a higher dimensional plane, that contains a Multiverse which contains infinite timelines, and also Moons, which are in fact 5 dimensional metaphysical constructs, of infinite size and infinite mass, Fought and bested Alduin even after he had devoured souls to become stronger) | Low Macroverse level (Fought with, and single-handedly defeated Miraak after reading the Black Books of Hermaeus Mora and learning their words of power, Miraak being the first ever dragonborn capable of single handedly defeat alduin), likely higher (After defeating Miraak the Dovahkiin absorbed his soul and all of his power, knowledge and abilities) | High Hyperverse level (Through Aedric and Daedric Artifacts)

Intelligence: Gifted. An incredibly skilled warrior who bested countless opponents, including ancient and powerful dragons, and even gods such as Alduin and Tsun. Played an instrumental role in the Stormcloak and Imperial Civil War in Skyrim. A prodigy in the art of the Thu'um, mastering the Way of the Voice as if it were second nature to them. Skilled in various abilities, including forging, enchanting, alchemy, spellcasting, stealth, and building. Can potentially become Archmage of the College of Winterhold, the Harbinger of the Companions, the Guildmaster of the Thieves' Guild and the Listener of the Dark Brotherhood.

The shout does not simply cause a dragon to fall from the sky, Dragons are immortal beings, even if you destroy their bodies they will still live as they are fragments of Akatosh, They arnt physical beings either, as said by Michael Kirkbride "They are Biological Time machines powered by ideologies" dragons are not born they simply are, unchanging and immutable they are aspects of the embodiment of Time, what Dragonrend truly does is that it forces the very concept of mortality/end/finite etc. unto the dragons/immortals so that they are able to be killed the shout strips away their immortality

Dragonrend even made it possible for The Dovahkiin to kill Alduin who is a major aspect of the Time Dragon and the literall embodiment of the End of Time.

Feats: Defeated Alduin, who was devouring the linear time of the sphere of Mundus, Defeated Miraak, who was stronger than Alduin and a treat to the entire Mundus