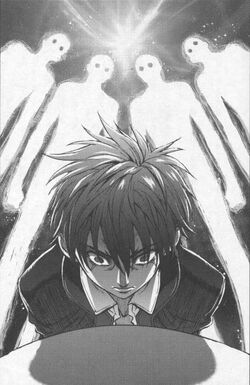 The Extra-universal Gods are a neutral faction of antagonists of Ichiban Ushiro no Daimaou. They're a group of countless gods from different universes who became storytellers within the stories created by Akuto Sai.

Age: Above the concept of time

Superhuman Physical Characteristics, Creation (They can create stories), Plot Manipulation (They have full control over their stories, editing their plot to their will), Dimensional Manipulation (Type 2; They have full control over stories,structures that contain an infinite retreat of dreams within dreams within dreams), Large Size (Type 11), Soul Manipulation (They control the souls of every being within their stories), Subjective Reality (They can project their desires into the reality of their stories), Beyond-Dimensional Existence (Type 2), Reality Warping, Invisibility (Cannot be seen by looking at them), Cannot by heard by listening them, Immortality (Type 1)

Nonexistent Physiology (It's made of nothing and comes from a world without matter), Abstract Existence (Type 1; It's the personification of the second person, represented by the sounds 'you', 'du', 'vous', or 'sue')

Boundary Manipulation (Breaks the boundaries that distinguish one being from another), Absorption (Entering in contact results in getting devoured, losing their sense of self – aka, their soul), Abstract Existence (Type 1; It's the personification of the lack of identity, represented by the sound 'who')

Existence Erasure (Beings hunted down will lose the barrier, breaking their sense of self – their soul – and disappearing from the universe), Abstract Existence (Type 1; It's the personification of not existing, represented by the sound 'death')

Duplication (Multiplying in a process similar to meiosis), Abstract Existence (Type 1; It's the personification of creation, represented by the sound 'multiply')

Attack Potency: High Hyperverse level (Able to create stories, structures that contain an infinite retreat of dreams within dreams within dreams) | Ascendant level (Just like Hiroshi, they are stated to be the same as Akuto Sai after releasing all possibilities)

Intelligence: Nigh-Omniscient. Know everything that happens within the stories created by them, but are unaware they only exists as part of a story.

Weaknesses: Are bound by Akuto's will