All Fiction Battles Wiki
Register
Don't have an account?
Sign In
Advertisement
in: Characters, Male Characters, Gods,
and 88 more

The God Emperor of Mankind 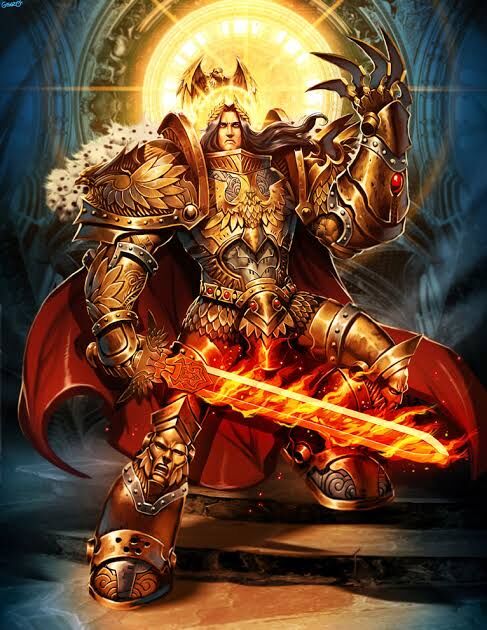 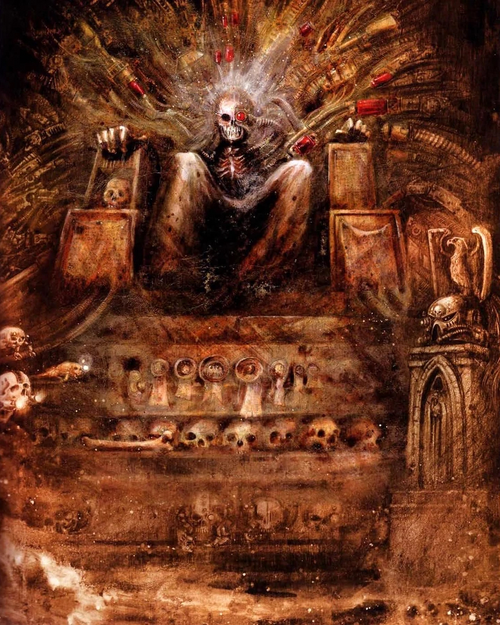 The God Emperor of Mankind is the immortal ruling monarch of the Imperium of Man, and is described by the Imperial Ecclesiarchy and the Imperial Cult as the Father, Guardian and God of humanity. The Chaos Gods and the daemons of the Warp refer to him as "the Anathema", for he is the greatest embodiment of universal order in the galaxy today. For ten millennia, he has sat immobile within the Golden Throne of Terra, once a living man, yet now incapable of supporting life with his shattered, decaying body, a result of his self-sacrifice for the good of all mankind at the end of the now mythical Horus Heresy. Now, the Emperor remains at the edge of life and death only through a combination of the ancient technology of the Golden Throne and the sheer force of his will, itself sustained by the soul-sacrifice of 1000 psykers every day.

To humanity's countless trillions across the galaxy, he is nothing less than God, his will omnipotent, extending across the million worlds that comprise his galaxy-spanning Imperium. Through the Emperor, humanity stands united as one of the most powerful races in the Milky Way, and as a singular force, is capable of surviving against a myriad of threats from the forces of Chaos, rebels, and numerous xenos species. However, the Imperium of Man is but a twisted parody of the Emperor's dreams of a secular, enlightened and peaceful society. In His name, the corrupt High Lords of Terra carry out an oppressive, decadent rule. In His name, the Inquisition continues their brutal crusade against all enemies of men, holding absolute power and authority in their bloodthirsty hunt. In His name, the Ecclesiarchy enforces complete, blind devotion to the Emperor as the one true God, sentencing all heretics along the way. In the Emperor's absence, men have fallen into technological and cultural stagnation, and a regression into tyranny, superstition and religious obfuscation and intolerance, in which untold trillions live in constant suffering and misery, being nothing but minuscule cogs in a gigantic machine. And held to His Golden Throne, He can do nothing but shed tears for all humanity.

Still, as the Imperial Creed has taught for over ten thousand years, the Emperor has protected and fought for humanity ever since. Since His "ascension" to the Golden Throne, the Emperor's consciousness has remained within the Warp, and has been in a state of constant battle against the Chaos Gods, continuously holding back their form and influence from fully piercing into the material universe. Without his sacrifice, not just humanity, but the whole galaxy and beyond would have been long gone. Though he has failed in his vision for mankind, the Emperor still fights for men, even in their fall. After all, he is The Master of Mankind, the Father, and Guardian of Men. He is The Emperor of Mankind, and The Emperor Protects.

Name: True name unknown, said to have a false god's name, know as the Emperor of Mankind, the Master of Mankind, the God-Emperor of Mankind (after his "ascension"), Neoth (the name he had given himself as ruler of the first city), Revelation (the name he has chosen to use in certain occasions), the Master of the Lines (during the Unification Wars), the Omnissiah (by the Cult Mechanicus), the Anathema (by Chaos), the Allfather (by the Space Wolves), Him On Earth (by the Imperial Fists) and countless others

All previous abilities and resistances to an unfathomably greater extent, Higher-Dimensional Existence (Inside of the Warp, much like Magnus, the only forms and dimensions the Emperor possesses are those he chooses to impose upon himself), likely Beyond-Dimensional Existence (Type 2), Dimensional Manipulation (Type 2; Can manipulate the Warp in a variety of ways), Non-Corporeal, Physics Manipulation, Law Manipulation, Abstract Existence (Type 1; the greatest manifestation of Order in existence, diametrically opposed to the Chaos Gods and therefore likely equal to them), Order Manipulation, Empowerment(Every Warp entity is immensely empowered by the beliefs of mortals, and the Emperor has countless billions upon billions of humans devoted to him), Immortality (Types 1, 3, 4, 5, 8 and 9), Regeneration (At least High-Godly; capable of surviving The Chaos Gods trying to destroy him on every level), Conceptual Manipulation (Type 1), Large Size (At least type 10, likely Type 11), Nonexistent Physiology (Type 2), Omnipresence, Self-Sustenance (Types 1, 2 and 3)

Attack Potency: At least Solar System level (Far superior to his Primarchs such as Sanguinius, who fought against Madail and Ka'Bandha. Fought on equal footing with his son, the Chaos Warmaster Horus Lupercal. Unfathomably superior to the setting's other most powerful psykers, which would make him far more powerful than the Cacodominus, who could distort the Astronomicon and have entire Sub-Sectors be lost to the Imperium, and vastly above that of Teturact, who could warp an entire solar system, including the space between planets, and beyond with his influence), likely Multi-Solar System level (Likely caused the "Storm of the Emperor's Wrath", a massive Warp storm which wiped out an entire sector of the galaxy), possibly Universe Level+ (Depending on how powerful the shard of the Void Dragon was, the Emperor might have bested a high-end Transcendent C'tan shard. Considering the shard imprisoned beneath Mars seems to retain a great number of memories and is deemed devastatingly powerful, this is quite possibly the case) | At least High Hyperverse level (Should be stronger than all C’tans in their complete forms, the C’tan are capable of controlling at will the structure of the Realspace which contains the Material Multiverse, which contains a “Number too great of higher spatial-temporal dimensions to be measured by something so limited as the human language” additionally the C’tan are superior to the Eldar God of wrath Kaela Mensha Khaine, who was able to cause severe damage to avatars of Slaanesh, this avatars being capable of controlling the Warp, which contains an infinite number of Higher Spatial-Temporal Dimensions inside a Brane World) | Ascendent level (Able to hold off the four Chaos Gods from breaking into Realspace and consuming the Material Multiverse, the Chaos Gods exists beyond the very concepts of time and space, with the Warp's true nature being an utterly formless, dimensionless void without limits or true geography, with the only dimensions it or its inhabitants have being ones they choose to impose upon it or themselves)

Speed: Massively FTL+ combat speed (Far faster than his Primarchs. Horus, one of his strongest sons, could barely follow his father's movement with his eyes. Fought the C'tan Void Dragon on equal footing and punched it from Earth straight to Mars. This shard of the Void Dragon would have been unfathomably more powerful than an almost completely drained shard of the Nightbringer, who travelled seventy thousand light years in three months time) | Immeasurable (Can freely travel trough the Chaotic sea of the Warp and it’s infinite dimensions, the Warp lacks completely from the conventional definitions of Space and Time perceived by the mere 3 dimensional human beings) | Irrelevant (The Emperor is constantly battling the Chaos Gods while within the Warp, where the notions of space, time, dimensionality and distance, simply does not exist)

Lifting Strength: At least Class T, likely far higher (Should be far superior to his Primarch Angron, who can gradually climb out of a collapsed mountain. Can toss giant metallic space aliens across planets/from Earth to Mars. Tossed a Plasma Core which was a kilometer in diameter into the Warp) | Immeasurable, likely Irrelevant

Durability: At least Solar System level, likely Multi-Solar System level (Fought and defeated a large shard of the Void Dragon, arguably the most powerful among the 4 C'tan has appeared in the Milky Way galaxy so far. Endured attacks from Horus although his son was being empowered by all four Chaos Gods. Should also be capable of generating similar levels of energy to his attacks with his shields), possibly Universe level+ (Depending on the scale of the C'tan Shard he fought) | At least High Hyperverse level | Ascendent level (Able to battle equally with all four Chaos Gods at once)

Stamina: Vastly superhuman (Should be far, far superior to his Space Marine "grandchildren", who can continue fighting for weeks on end without stop, as well as his Primarchs and Custodes, who can keep fighting with fractured skulls, broken ribs, punctured lungs and essentially any injury that doesn't outright kill them. Has been enduring the strain of sitting on top of the Golden Throne, the greatest psychic pain engine in the galaxy, for over 10,000 years) | Limitless (Does not require rest or anything of the sort) | Infinite

Intelligence: Supergenius (A brilliant scientist unmatched in the fields of biology, chemistry, engineering and more, having created numerous technologies which to this day, millennia later are still staples of the Imperial war machine, such as the Bolter. Created and refined the process of producing Thunder Warriors and Custodes, the later of which are posthuman demigods uniquely perfect in form and function. Later served as project leader on the creation of the Primarchs, and subsequently their mass produced Legions. Personally commanded a massive military campaign stretching across the entire galaxy for nearly two centuries, conquering over a million worlds into his empire. Developed the Webway project, an initiative which would make mankind free from Chaos by permanently severing their reliance on the Warp. Built both the Golden Throne and the Astronomican. An extremely capable and supremely charismatic diplomat who could bring entire worlds to surrender without a single shot being fired. Overall, like the smartest single being the human race had ever produced, with his genius only being replicated in parts by the most intelligent of the Imperium. The intelligence, personalities and specialties of all his Primarchs are likely just his own psyche divided)

Weaknesses: The Emperor will not use his full power outright when forced to face his close friends or "sons" unless absolutely necessary (although given the retcons to this made by the Horus Heresy series, this weakness is dubious at best), the Golden Throne has begun to fail and it will be a matter of time before the Emperor's mortal coil properly ceases to be if there is no solution. If that happens, the results are completely unknown | The number of believers mat affect his power

Feats: Defeated The Void Dragon, the strongest C’than, is able to hold off the four Chaos Gods from breaking into Realspace and consuming the Material Multiverse

Key: In the Materium | In the Warp

Note 2: The Warp storm named "Storm of the Emperor's Wrath" is not yet proven conclusively to be the Emperor's i.e. a massive multi-star system encompassing psychic/warp storm after the Heresy (post 31st century) is likened to be the Master of Mankind's power, but this is the claim of the clergy of the Imperial Church, thus it's not entirely conclusive if he actually did it.