All Fiction Battles Wiki
Register
Don't have an account?
Sign In
Advertisement
in: Characters, Reality Warpers, Concept Users,
and 34 more 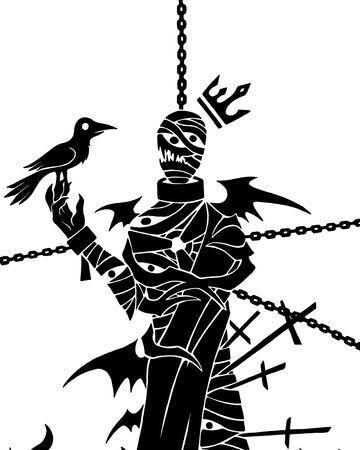 The Hanged King was once the ruler of the city-state of Alagadda, where he governed as a corrupt tyrant, suppressing and exploiting monarchs. He indulged himself in base pleasures and possibly practiced ancient, dark magic from the abyss. At some point the King came into contact with the Brothers Death and played a game with them, but lost.

Eventually the people of Alagadda rebelled against their King, setting his palace on fire and killing all who were loyal to him, including his court jester. The King was captured, and his crown and robes were ripped away from him, replaced with rags and chains. His jaw was then broken and he was forced to crawl through the streets of the city, while being mocked, kicked and pelted with filthy things by his former subjects, who all cheered loudly. In responce he only mumbled unholy words, which frightened the people, who in turn cheered louder in order to silence him.

The King was hung outside the city on a hill, and while suffocating to death, he continued to mutter unholy words until he died. He was originally left to hang, to be feasted on by crows and maggots, but as nothing touched the dead body, the people burried him in a shallow grave.

After this, the people started to rob the palace of their former ruler, indulging themselves in his riches.

The next day, crows started to gather around the grave of the dead King and strange noises could heard from beneath the earth, though this was only heard by a homeless man, who was dismissed the rest of the people. The day after that, the river that flew through the city turned red and started to smell like human blood, and many citizens fell ill, started to bleed and tremble and were bound by chains. Those who stole from the palace suffered the most, growing weak and eventually dying.

On the third day the illness lifted, but the people became suicidal, cutting their faces and slitting their throats, and their blood poured through the city into the red river. Madness spread and most animals save for the crows also fled the city in this time.

On that very same day, having refused to die and having bargained with the souls of others with the Brothers Death, the King rose from his grave and travelled through the city, back to his palace. There he sat down on a throne covered with rusted spikes, which pierced his flesh and brought agony to his soul. Despite the pain, he remained silent for a moment, until the palace began to tremble and the red river boiled. The crows started to circle the city and pecked any surviving subjects to death. The Hanged King himself was now bound to the seat permanently and his undead court jester approached him, offering a silver chalice of blood, which the King took, but due to his trembling hands, dropped on the floor, spilling the blood.

Powers and Abilities: (Types 1 and 7; Exists as a corpse and is stated that he will rule over Alagadda forever), Self-Sustenance (Type 1, 2, 3 due to his nature of being a corpse), Reality Warping (Reshaped all of Alagadda), Transmutation (Turned a river into blood), Disease Manipulation (Spread a disease across his whole kingdom), Crow Manipulation (Crows pecked all the people in his kingdom), Dream Manipulation (All those whom have fled Alagadda are haunted by it in their dreams) | All powers as before plus Dimensional Manipulation (Type 2; Is capable adjusting the dimensionality of everyone who visits Alagadda and causing them to exist on the same dimensional level. This power has worked on the Oneiroi, whom exist as an amalgamation of minds and Uhb’Seq, a higher dimensional being), Time Manipulation and Spatial Manipulation (Warped Alagadda so the restraints of time and space are mere suggestions), Nonexistent Physiology (Is described as a wound in reality, and a void), Immortality (Types 5 and 9; Is a void), passive Matter Manipulation (Due to him being a wound in reality, matter and form grows around him when he wants to take form), Regeneration (Mid-Godly. The Hanged King's physical body is merely a manifestation constructed by his true form, which exists as a wound in reality unbound by it altogether), passive Empathic Manipulation (His mere presence in the Library made it more insular and depressive), Text Manipulation (Texts in Alagadda will automatically translate themselves into the reader's native language), Status Effect Inducement (The native language in Alagadda induces nausea and headaches into its readers and listeners), Madness Manipulation (People go insane from just looking at him), Cloth Manipulation (All who enter Alagadda will have their clothes changed to fit the theme of the place), Memory Manipulation (When SCP-049 left it he was unable to recall the books he had read there), Perception Manipulation (In Alagadda the only colors one may see are red, white, black, and yellow), Sound Manipulation (Can somehow scream in spite of lacking a face), Light Manipulation (Spectrometers are unable to properly work in Alagadda), Physics Manipulation and Gravity Manipulation (Alagadda's structures do not follow regular physics including gravity), Resurrection (Brought SCP-096 back to life after The Foundation killed it), Extrasensory Perception (Despite lacking eyes he is able to see), Dimensional Travel (Is capable of using Ways), BFR (Made Alagadda the nexus to all dimensions, and is capable of expunging all whom he sees fit from the city), Mind Manipulation (SCP-701, which is a play about The Hanged king, causes the audience who watches it to become psychotic and murder each other), all of The Ambassador of Alagadda powers besides Immortality type 8 (Is the manifestation of his will)

Attack Potency: Ascendent level+ (Stated to rival Yaldabaoth in power, which posses a threat for the The Tree of Knoweldge, from which all creation steams. The creation should have all the Narrative and Anti-Narrative stack in itsel Ambassador of Alagadda, the being that embodies his will, utterly dwarfs in power the Masked Lords of Alagadda, who control Alagadda in the King's absence.) Ascendent level+ (is able to harm the Tree Of Knowledge, and poses a significant threat to the Wanderer's Library, which is the source of all creation)

Speed: Irrelevant (Comparable to the Brothers Death, who were able to move through creation before dimensioned time and space existed)

Feats: Challenged the Brothers Death to a game match, created the City of Alagadda, the Nexus that connects all realms across the Multiverse, was compared to Yaldabaoth and is capable of causing severe damage to the Tree of Knowledge, from which all creation steams