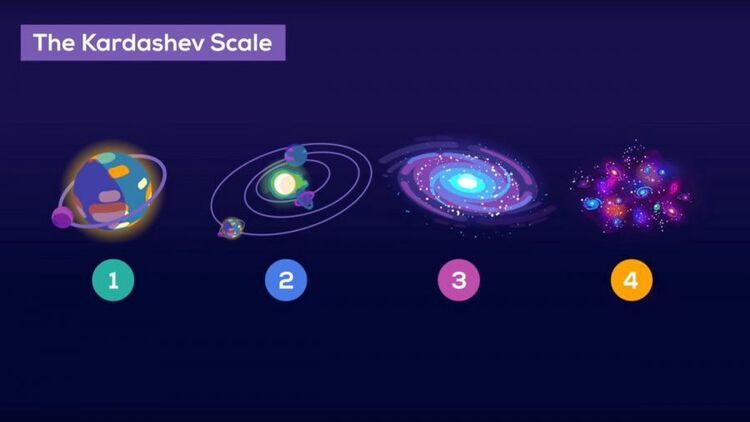 The Kardashev scale is a method of measuring a civilization's level of technological advancement based on the amount of energy it is able to use. The measure was proposed by Soviet astronomer Nikolai Kardashev in 1964. It has 3 base classes, each with an energy disposal level: Type I (10¹⁶W), Type II (10²⁶W), and Type III (10³⁶W). Other astronomers have extended the scale to Type IV and Type V. These additions consider both energy access as well as the amount of knowledge the civilizations have access to.

Type 0: A civilization that can harness and use a significant amount of energy from their home planet but not to its full extent.

Type I: A Type I civilization, also called a planetary civilization, can use and store all of the energy available on their planet. Its methods may include large-scale application of fusion power and antimatter in large quantities.

Type II: A civilization capable of harnessing the energy radiated by its own star—for example, the stage of successful construction of a Dyson sphere or Matrioshka brain. Lemarchand stated this as a civilization capable of using and channeling the entire radiation output of its star. The energy use would then be comparable to the luminosity of the Sun. Antimatter is likely to be produced as an industrial byproduct of a number of megascale engineering processes (such as star lifting) and, therefore, could be recycled.

Type III: A civilization in possession of energy at the scale of its own galaxy, with energy consumption at ≈4×10^44 erg/sec. Lemarchand stated this as a civilization with access to the power comparable to the luminosity of the entire Milky Way galaxy, about 4×10^44 erg/sec (4×10^37 watts). Capturing the energy of gamma-ray bursts is another theoretically possible power source for this civilization, in addition of being able to use quasars as an extra power source.

Type IV: A civilization in possession of energy at the scale of its own supercluster of galaxies. Type IV civilizations would almost be able to harness the energy content of the entire universe and with that, they could traverse the accelerating expansion of space (furthermore, advance races of these species may live inside supermassive black holes). A civilization this advanced could also tap into the mysterious dark matter and manipulate the basic fabric of spacetime.

Type V: A civilization in possession of energy at the scale of its own universe. The power output of the visible universe is within a few orders of magnitude of 10^45 W. A Type V civilization would be advanced enough to escape their universe of origin and explore the multiverse. Such a civilization would have mastered technology to a point where they could simulate or build a custom universe.

Type VI: A civilization in possession of a scale of energy output higher than their own universe's energy per second. A Type VI civilization may be able to manipulate the energy of two to any other finite number of universes.

Type VII: A civilization in possession of a scale of energy beyond any known quantification of joules.