All Fiction Battles Wiki
Register
Don't have an account?
Sign In
Advertisement
in: Characters, Genderless Characters, Marvel Comics,
and 36 more 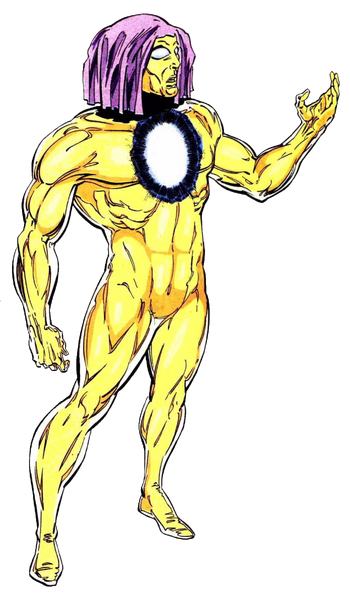 The Living Tribunal is an extremely powerful humanoid cosmic entity that has existed as long as the universe itself. Its function is to protect the Multiverse (the sum of all alternative universes) from an imbalance of mystical forces. It must prevent a universe from accumulating more power than any of the others, or from disturbing the cosmic balance in any way.

Powers and Abilities: Superhuman Physical Characteristics, Immortality (Types 1,3 and 5), Regeneration (Low-Godly), Non-Corporeal, Abstract Existence (Type 1. He is a conceptual being, insubstantial as an idea), Transduality (Type 2. Transcends all dualities of the multiverse, considering those concepts as inferior to his existence, being the judge who bestrides and is apart of them), Nonexistent Physiology (Type 2), Acausality (Type 5), Law Manipulation, Chaos Manipulation, Void Manipulation, Reality Warping, BFR (Banished Zom from Earth), Teleportation (Can teleport others at will), Clairvoyance & Power Bestowal (Granted visions of the future to Doctor Strange), Fate Manipulation (Can manipulate fate to induce accursed events. He is the final arbiter of fate and his verdict binds the cosmos), Attack Reflection (Made Strange's spell turn against himself), Telepathy (Can read thoughts), Portal Creation & Dimensional Travel (Can open and travel through interspatial portals), Power Nullification (Prevented Adam from using the powers of the Infinity Gauntlet), Power Absorption (Can remove the power source from its user), Mind Manipulation & Paralysis Inducement (Completely paralyzed Sis-Neg), Spatial Manipulation, Time Manipulation, Conceptual Manipulation (Type 1), Sealing, Avatar Creation, Cosmic Awareness

Attack Potency: Ascendent level (He is the embodiment of the Marvel multiverse and its abstract entities, while also being transcendent of them. Judges and transcends all possible dualities and opposing realities of the multiverse, including the concepts of time and space, and every other concept from all other dimensions)

Speed: Omnipresent (Exists across all multiverses)

Intelligence: Nigh-Omniscient (Possesses "infinite knowledge" and is constantly aware of the past, present and future)

Weaknesses: All faces must agree for action to be taken.

Note: This profiles only covers the original version of Tribunal, and not the Adam Warlock counterpart.