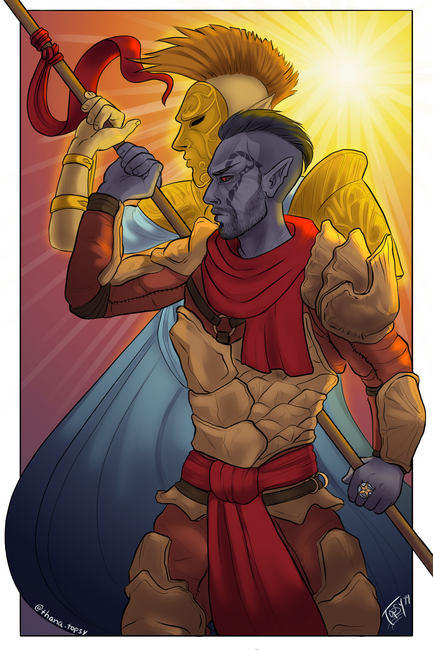 The reincarnation of Chimeri warlord Indoril Nerevar. The Nerevarine arrived in Morrowind in 3E 427 by the order of Emperor Uriel Septim VII, ended the Blight, and defeated Dagoth Ur, among many other things. Rumors swirled at the end of the Third Era that the Nerevarine went on an expedition to Akavir and has not been heard from since

Gender: As a Prisoner the Nerevarine is a being who is simultaneously of every race, every gender, and who walks all paths.

Attack Potency: Low Macroverse level (Fought and Defeated Dagoth Ur who can defeat Sotha Sil and Almalexia, Defeated the Avatar of Hircine and is comparable to Weakened Vivec and is capable of killing him) | High Hyperverse level (Was capable of fighting and Holding back the Numidium for a short time while his people escaped) | Ascendent level+, likely High Ascendent level (Ascended to the state of CHIM, CHIM users exist on a “Non-Spatial realm” beyond the Void of Oblivion, which contains infinite higher dimensions. CHIM means, transcending all of existence and its boundaries, seeing the Wheel of Towers "sideways" as the Eternal I, by realizing that all of existence is merely the Dream of the Godhead. Once ascended to CHIM, The Nerevarine is freed from all restrictions and limitations. Transcending the Infinite Telescope of Wheels, each Wheel preceding the creation of Space and Time by Lorkhan and Akatosh and greater than the previous, representing higher infinities which lacks completely from the notions of “Time angles”, referring to Spatial-Temporal Dimensions. And is able to control at will the Dream of the Godhead, and it’s layers, including the Telescope of Wheels and beyond)

Speed: Immeasurable (Capable of keeping up with Gods like Dagoth Ur, Hircine’s aspect and the members of the Tribunal who Transcend the concept of linear time) | Irrelevant (Is capable of keeping up with the Numidium) | Omnipresent across the Tower of Wheels (Upon perceiving the Wheels "sideways" as the Tower, The Eternal I, He became one with the whole of the Tower as Individuality is illusory and all is merely the Dream of the Godhead, but was able to maintain his sense of Self through CHIM, simultaneously existing as one with everything but also as an Individual Being)

Range: Standard with weapons, Hundreds to Thousands of Kilometer with magic | High Hyperversal (Can freely traverse through Oblivion, an infinite-dimensional void which encompasses all possibility and contains an endless number of individual daedric realms) | Meta-Ascendental (Should be comparable to other CHIM users who Can leave the creation altogether, and go beyond the Dream of the Godhead itself in order to access the Dreamsleeve, non-space that lies beneath everything as the deepest level of existence before the state of Amaranth. and Should be capable of completely erasing individuals from the "Thought-Realm of God" itself)

Feats: Defeated Dagoth Ur, The avatar of Hircine and Almalexia