All Fiction Battles Wiki
Register
Don't have an account?
Sign In
Advertisement
in: Gears of War, Characters, Male Characters,
and 18 more 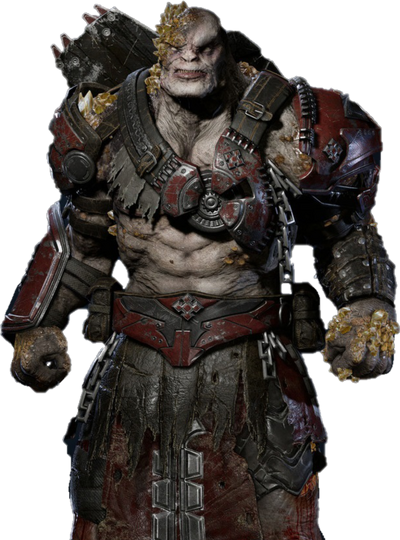 The Speaker was a Scion Elite who led the Swarm of the Tollen Dam Hive and was responsible for the abduction of Fort Umson's inhabitants including Reyna Diaz in 42 A.E. A former Locust of presumably great importance, the Speaker was a step above other Scions: Physically imposing, powerful and intelligent enough that he could speak fluent Tyran.

Superhuman Physical Characteristics, Weapon Mastery (Type. 1, he's skilled with the Boomshield), Martial Arts (Type. 1), limited Invulnerability (The crystals on the Speaker's body were unable to be destroyed by the COG, making those portions of his body impervious to most weapons), Enhanced Senses (All Swarm have a increased sense of smell and hearing), Natural Weaponry (All Swarm have claws and some have spikes protruding from their bodies), Resistance to Explosion Manipulation (The Boomshield is able to fully take the blow from explosions and will not destroy from it).

Natural Weaponry, Explosion Manipulation (The Swarmak has a Brumak Rocket Launcher), limited Invulnerability (The crystals on the Swarmak's body were unable to be destroyed by the COG, making those portions of its body impervious to most weapons).

Attack Potency: Small Building level+ (He is superior to Kait Diaz and Swarm Drones), City Block level+ with Swarmak (It's superior to the Brumak)

Speed: Subsonic (He can keep up with Kait Diaz), Speed of Light reaction speed (He should be comparable to RAAM)

Lifting Strength: Class 5 (He should be comparable to RAAM)

Durability: Small Building level+ (he can survive multiple attacks from Kait and should be comparable to RAAM)