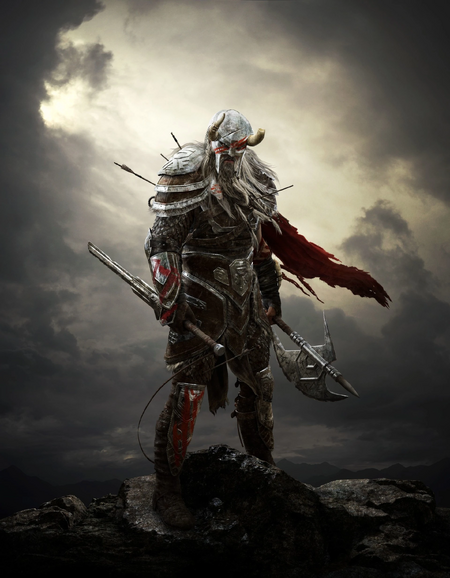 The Vestige, known by a plethora of other names, was a Soul-Shriven hero of prophecy. As a mortal, they were sacrificed to Molag Bal by Mannimarco as part of a dark ritual in 2E 582. With the aid of former emperor Varen Aquilarios, the Vestige escaped imprisonment in Coldharbour and reformed the Five Companions. After participating in the Three Banners War for one of the three alliances throughout its territory and Cyrodiil, the Vestige joined an invasion of Coldharbour by the Fighters and Mages Guilds. The Vestige became instrumental to that effort, restoring, Meridia's Hollow City in Coldharbour as a beachhead for the invasion. The Vestige, with Meridia's assistance, thus ended Molag Bal's Planemeld and regained their soul. Meridia then sent the Vestige to explore events as if they had been part of the other alliances of Tamriel. The Vestige then explored the aftermath of the Planemeld in Craglorn, facing the Celestials corrupted by the Serpent. Thereafter, the Vestige joined the Dark Brotherhood of which they became a Silencer, the nascent Thieves Guild in Hew's Bane, and aided in the rebuilding of Kurog's Orsinium. The Vestige then became involved in a Daedric war involving the Daedric Triad of the Princes Clavicus Vile, Mephala, and Nocturnal when they foiled the Triad's plot to sap Vivec of his power, before preventing their takeover of the Clockwork City. The Vestige then traveled to Summerset and became a member of the Psijic Order. Nocturnal, however, betrayed the Triad, and was promptly defeated by the Psijics, Vestige, and champions of Meridia and the betrayed princes. The Vestige then journeyed to Murkmire with the Cyrodiilic Collection Agency, discovering the lost Root-Whisper tribe. The Vestige was later reunited with Abnur Tharn, inadvertently aiding his sister's plot to have him release dragons across Tamriel. Abnur and the Vestige and prevented Euraxia's dragon allies from siphoning Jode's Core and reclaimed the kingdom of Rimmen from Euraxia for its true heir, Khamira. The Vestige would also ally with Sai Sahan to re-establish the Dragonguard in Southern Elsweyr. The Dragonguard forged an alliance with the dragon Nahfahlaar, who empowered the Vestige with the Mask of Alkosh. The Vestige, Abnur Tharn, Khamira, Sahan, Nahfahlaar, and the Dragonguard thus stopped the leader of the unleashed dragons, Kaalgrontiid, from ascending to godhood, though their mission came at the apparent cost of Abnur Tharn's life.

Gender: As a Prisoner the Vestige is a being who is simultaneously of every race, every gender, and who walks all paths.

Classification: Hero, Prisoner, the soulless one, The Vestige, The Savior of Tamriel, Hero of Coldharbour, Champion of Vivec

Attack Potency: Low Macroverse level (Fought and defeated the avatar of Barbas who is comparable to the End Game Dovahkiin and was able to defeat Manimarco who can Damage the barriers of mundus and oblivion. Can defeat the constellations who have more power than the serpent that can destroy creation and seal all the Ehlnofey who make up all the laws and concepts of mundus) | High Hyperverse level (Was Imbued with the power of the 8 Divines using the Amulet of Kings, managed to defeat The Daedric Prince Molag Bal inside his own realm of Coldharbour).

Range: Standard with weapons, High Hyperversal with magic (Capable of calling fragments of the Sun and meteors from the constellations)

Intelligence: Gifted (Managed to battle and defeat the Celestial constellation of the Warrior and Fought the Barons which are the perception of the perfect warrior in the eyes of the Demi Prince Fa-Nuit-Hen)

Feats: Defeated The constelations and Barbas, Fought and won in single combat against the Daedric prince Molag bal

Keys: The Vestige | Champion of the Eight