All Fiction Battles Wiki
Register
Don't have an account?
Sign In
Advertisement
in: Gears of War, Characters, Male Characters,
and 15 more 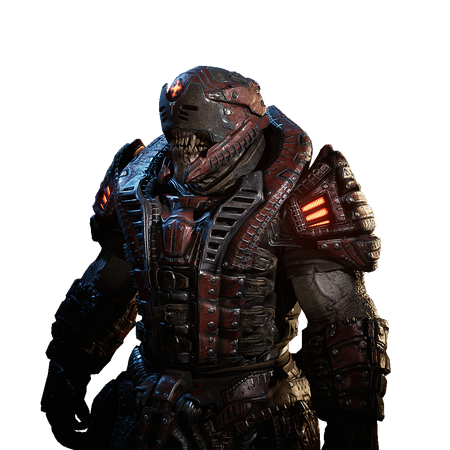 The Theron Guard was an organization of the Locust Hordes' military which represents the elite of the Locust, the head-and-shoulders above the lowly Drones in terms of equipment, intelligence, and training. They are elite Locust troops, assigned to commando-style raids against high-profile targets and high-level defensive missions that require the sort of precision the Therons possess and can handle. Some members of the Theron also act as field officers, leading the lesser Locust troops into battle. If the Drones and Boomers represent the Locust military's hammer and anvil, then the Theron Guard is most decidedly its scalpel.

Powers and Abilities: Superhuman Physical Characteristics, Weapon Mastery (Type. 1, they're skilled with many Locust weapons), Martial Arts (Type. 1), Enhanced Senses (All Locust have a increased sense of smell and hearing), Natural Weaponry (All Locust have claws and some have spikes protruding from their bodies), Damage Boost (Via Active Reload, if successfully done it’ll boost the damage of the remaining rounds that were in the gun before the reload), Statistics Amplification (Via Active Reload, if successfully done it’ll increase the reload speed and the fire rate of the gun), Explosion Manipulation (Via Torque Bow).

Attack Potency: Small Building level (They can kill COG Gears and are superior to Locust Drones), higher (Active Reload increase the damage of the shots that remand during the reload)

Speed: Subsonic (They can keep up with Marcus Fenix), Speed of Light reaction speed (They're superior to Locust Drones and they should be comparable to Marcus Fenix), Supersonic attack speed with Torque Bow, Gnasher Shotgun and Boltok Pistol, higher attack speed (Active Reload can increase the rate of fire of some weapons)

Durability: Small Building level (They can survive attacks from COG Gears, superior to Locust Drones and can survive close explosions from Bolo Grenades)

Stamina: High (They can fight for many days without rest and are superior to Locust Drones)