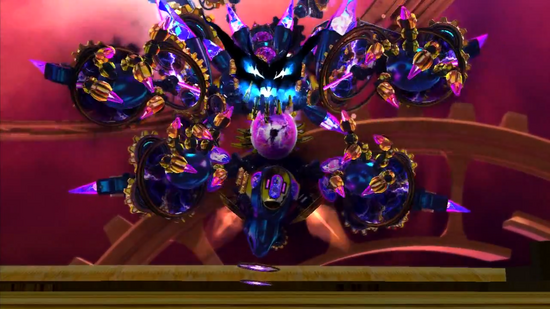 The Time Eater (タイム・イーター Taimu Ītā?) is an antagonist in the Sonic the Hedgehog series. Initially an alien creature with dominion over time and space, the Time Eater was discovered by Dr. Eggman who used it in an attempt to conquer the world by erasing his past failures at the hands of Sonic the Hedgehog with the help of Classic Eggman. After inflicting incomprehensible damage to the universe, the Time Eater was used by the doctors to face Sonic's past and present selves in an attempt to erase Sonic completely, but was destroyed in the ensuing battle.

Powers and Abilities: Superhuman Physical Characteristics, Inorganic Physiology (Type 2), Immortality (Type 1), Self-Sustenance (Types 1, 2 and 3), Large Size (Type 0), Energy Projection, Time Manipulation (Ranging from Time Travel, slowing down time, and destroying it), BFR (Can send points in time to White Space, a place of time's non-existence), Body Control (Can detach its arms and telekinetically control them to attack his foes), Flight, Homing Attack, Existence Erasure, Causality Manipulation (Erased history, which left everything as a colorless void erasing cause and effect), Matter Manipulation (Can create mini stars with a little amount of energy), Status Effect Inducement (Can stun foes with Restraint Trap), Portal Creation (Can open holes in time and travel through it), Dimensional Travel (Can travel to timelines that should not even exist), Sealing (Can seal his opponents Into White Space and make them trapped), Forcefield Creation (Can create basic forcefields to defend the opponent's attacks), Resistance to Extreme Cold and Cosmic Radiations

Attack Potency: At least Universe level+, likely Low Multiverse level (Can destroy time and space on a at least universal scale. Likely affected and destroyed multiple timelines, as Silver's Future, Stardust Speedway Bad Future and the background universe used for Sonic VS Shadow fight in the Space Colony ARK are shown inside of the White Space, the latters are separated timelines from the main universe where Sonic resides. Has control over White Space, which is said to have parallel dimensions, fought against Modern and Classic Super Sonics)

Speed: Massively FTL+ (Could keep up with both Classic and Modern Super Sonics)

Stamina: Limitless (Never shown to get tired, being part machine aids this)

Range: Extended melee range, Universal+, likely Low Multiversal with its abilities (Erased the space-time continuum and would likely have affected other timelines)

Intelligence: Mindless without a controller

Weaknesses: Its own core after being perfected