All Fiction Battles Wiki
Register
Don't have an account?
Sign In
Advertisement
in: Jujutsu Kaisen, Characters, Manga Characters,
and 14 more 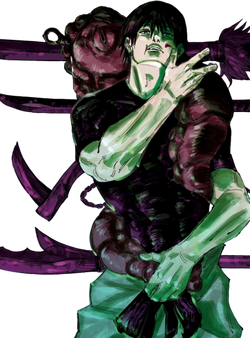 Toji Fushiguro is a recurring character in the Jujutsu Kaisen series. He was a former member of the Zenin family and the infamous assassin, known as the Sorcerer Killer (し Jutsushi Goroshi?), contracted by the Time Vessel Association among other groups throughout his time as a non-curse user. He was also the father of Megumi Fushiguro and former enemy of Satoru Gojo. While working for the Star Religious Group, Toji Fushiguro serves as the primary antagonist of the Gojo's Past Arc.

Powers and Abilities: Superhuman Physical Characteristics (Toji possesses a superhuman degree of physical strength, enough so to effortlessly yank Playful Cloud from Maki's hands), Weapon Mastery (Capable of employing a wide variety of weapons in battle. His entire fighting style is based around using weapons to substitute for jujutsu), Enhanced Senses (Thanks to his Heavenly Restriction, Toji's lack of cursed energy resulted in his five senses being heightened to their absolute peak - able to see curses and jujutsu with just his elevated senses), Preparation (When it came to his assignments, Toji approached his missions with careful calculation, caution, and patience. Toji has retained a plethora of information from being a member of the Zenin family, including understanding the workings of the Limitless and the Six Eyes.), Martial Arts (Type 3), Instinctive Reactions, Non-Physical Interaction (Toji's body became sharpened to a point where his five senses reached his pinnacle - could freely interact with curses - who are abstract manifestations born out of people's thoughts, mind and negative emotions), Power Nullification (via Inverted Spear of Heaven - can completely nullify cursed techniques on contact. It does so using an imbued cursed technique fueled by a foreign cursed energy. He used this to force the stoppage the Infinity technique, completely bypassing the nearly impenetrable limitless), Resistance to Soul Manipulation, Curse Manipulation

Attack Potency: Mountain level (He was able to defeat special grade jujutsu users on three separate occasions - such as young Satoru Gojo, who at the time was still considered a prodigy and one of the world's strongest sorcerers. Suguru Geto, who was effortlessly taken down by Toji along with several of his strongest cursed spirits. Toji himself referred to Suguru's abilities as rabble compared to his own strength. took on special grade cursed spirit, Dagon, completely alone and absolutely dominated him. Dagon was a powerful curse that Maki, and grade 1 sorcerers, Kento Nanami and Naobito Zenin were not able to defeat together. In comparison, Toji made exorcising Dagon look effortless, cementing his own status to undeniably on the level of that of a special grade.)

Speed: Massively Hypersonic (Toji is so fast that he could run on water like it was nothing, shocking the special grade Dagon who could keep up with Nanami and Maki, Scared Naobito who is stated to be the second fastest Sorcerer. He only got faster as their fight went on, allowing him to plow through the endless stream of shikigamis with ease.)

Range: Standard melee range physically. Up to Tens of Meters with equipment

Intelligence: Gifted (Toji is a tactical and clever individual. He was able to devise a plan in order to weaken a powerful shaman such as Satoru Gojo. Toji was also about to defeat powerful opponents such as Gojo and Geto by figuring out how their abilities worked and tactically countering them.)