All Fiction Battles Wiki
Register
Don't have an account?
Sign In
Advertisement
in: Verse-specific Powers and Abilities, The Elder Scrolls 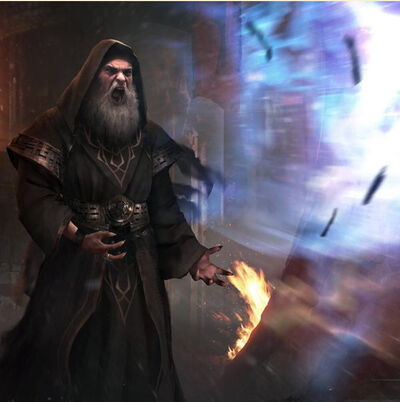 Originally there were two brothers, Anu and Padomay, who came from the Void. Through their interplay of Light and Darkness a third being is created, Nir (The Grey), the feminine counterpart, and the origin of all possibility. Anu and Nir fall in love with each other, and she becomes pregnant with his seed. However, Padomay also loved Nir, and enraged with her rejection, murders her as she was giving birth to Anu's children. Anu then murders his brother in revenge. Finally, Anu is left alone, with a broken mind and a grieving heart, and so he hides and go to sleep and begins to Dream, ascending to the state of Amarath, dreaming the totality of The Elder Scrolls setting.

Nir's Primal Wail, her mutual crying of simultaneous childbirth and death, echoes through the broken mind of Anu and it’s Dream as a Song, resulting in an endlessly echoing pattern of betrayal, death, and suffering, this is the Song of creation, whose tones compose and shape the most fundamental layers of existence and the Dream of Anu, Tonal Manipulation also called Tonal Architecture, is the ability to control this tones to make, unmake and remake the creation on it’s most fundamental level.

It’s also said that the Dwemer could use Tonal Manipulation/Tonal Architecture in similar ways to: