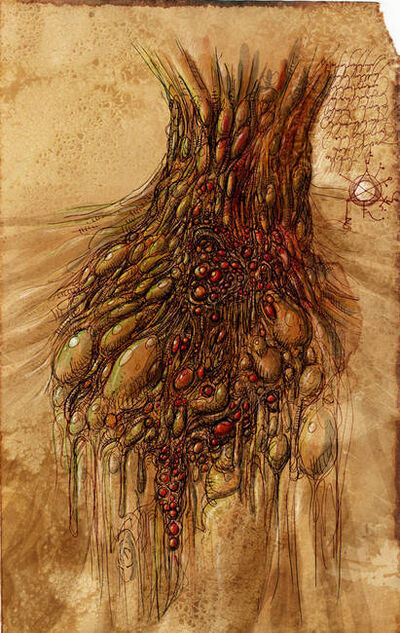 It is described as a huge protoplasmic mass resting in a grotto deep beneath the frozen earth. The being is of a monstrous fecundity, spontaneously generating primordial single-celled organisms that pour unceasingly from its shapeless form. It guards a set of stone tablets believed to contain the knowledge of the Elder Gods. Ubbo-Sathla is said to have spawned the prototypes of all forms of life on Earth; though whatever its pseudopods touch is forever devoid of life. Ubbo-Sathla is destined to someday reabsorb all living things on Earth. Ubbo-Sathla possibly dwells in Y'qaa.

The being may also dwell in Mount Voormithadreth and may have spawned another of its residents, the being Abhoth, whose form and nature is very similar. This similarity has led some writers to speculate that Ubbo-Sathla and Abhoth are the same entity viewed at different epochs under different names. The tablets that Ubbo-Sathla guards have been oft sought by sorcerers, though no sorcerer has yet succeeded in acquiring them.

Age: Beyond the concept of time

Classification: Outer God, Progenitor of all Life on Earth

Attack Potency: High-Ascendent level (As an Outer God, Ubbo should vastly transcend the concept of dimensional space. resides vastly beyond all dimensionality and is incomprehensible to Hypnos, who had ascended over infinite Ascendental realms, beyond all counsciouness, reality, matter, time and space.)