All Fiction Battles Wiki
Register
Don't have an account?
Sign In
Advertisement
in: Bleach, Manga Characters, Male Characters,
and 41 more

Kisuke Urahara (浦原 喜助, Urahara Kisuke) is the former Captain of the 12th Division, as well as the founder and 1st President of the S.R.D.I. After finding out about Aizen's Hollowfication experiments, and being frame by him, he was exiled to the World of the Livings where he has a small convenience store that sells Shinigami items.

After Ichigo's defeat at the hands of Byakuya, Urahara helps him to become a Shinigami and invade Soul Society to save Rukia Kuchiki. Thanks to Aizen's betrayal, Urahara's gets cleared from the past accusations and becomes a crucial ally to the Gotei.

Powers and Abilities: Superhuman Physical Characteristics, Master Swordsman, Master Hand-to-Hand Combatant, Pseudo-Flight, Genius Intelligence, Healing, Spiritual Awareness (Can see invisible spirits and objects), Extrasensory Perception (Can sense beings with Reiatsu), Longevity, Stealth Mastery (With Reiatsu-Concealing Cloak), Can take his reiryoku and exert it as reiatsu, Statistics Amplification (Can use Shunpo to boost his speed), Portal Creation and Dimensional Travel (Can open portals and travel between dimensions), Purification (Type 2, The Zanpakutō cleanses a Hollow’s soul of it sins and purifies it so it may enter the Soul Society), Duplication (With Portable Gigai), Forcefield Creation (With Chikasumi no Tate), Explosion Manipulation (With Hiasobi, Benihime, Juzutsunagi), Limited Power Nullification (With Tsuppane, Benihime),Energy Projection, Energy Absorption (With Hado 99), Regeneration (Low-Mid) via Bankai, and Can rewrite the structure of objects, Power Modification, Spatial Manipulation via Bankai, Paralysis (With Rikujōkōrō and Shitonegaeshi), Sealing, BFR (Shinigami can transfer the souls of the dead to either Soul Society or Hell depending on the deeds they've committed when they were alive), Soul Manipulation (Shinigami can directly damage souls with their Zanpakutō), Invisibility, Non-Physical Interaction (Can harm and interact with intangible spirits and objects), Overwhelming Aura (Spiritual pressure can passively induce ailments ranging from paralysis to fear inducement), Resistance to Soul Manipulation and Poison Manipulation (With Deathdealing Vaccine)

Attack Potency: Island level (Neutralized Yammy's Cero with his own attack, sliced off a Resurrección Luppi's tentacles, comparable to Yoruichi) | Multi-Continent level (On par with base Aizen, managed to pierce a partial Chrysalis Aizen with Jügeki Byakurai. Aizen has stated that were it not for his fusing with the Hogyoku, Urahara could have potentially put him down for good) | Multi-Continent level (At least as strong as before. Fought against Vollstandich Askin), Unknown with Bankai (His Bankai ignores conventional durability)

Stamina: Very high. Fought against Ichigo for 5 days and nights. He is one of the strongest Captain level Shinigami. Significantly weaker characters can fight for days without rest and with injuries that would be fatal to even the hardiest of normal humans.

Standard Equipment: His Zanpakutō, Benihime, Portable Gigai (a dummy with which he can switch places to avoid attacks)

Intelligence: Extraordinary Genius. Urahara is quite possibly the most intelligent being in the entire setting, having created numerous inventions such as Gigai variations, Tenshintai (which allowed a capable individual to achieve Bankai in a mere three days compared to the usual ten year period), and the Hougyoku. Even Aizen, who is extremely pridefull and fights the notion of something being above him, has admited that Urahara is his intellectual superior. He is very insightful of other people, allowing him to see through a person's demeanor and determine what they are thinking. Also able to read well into the situation, he can seemingly predict anything well in advance. He possesses great intuition, quickly becoming aware of any incoming danger and reacting to it in time. He is a crafty tactician, using his aloof and unkempt appearance to easily deceiving both allies and enemies. In battle, he regularly uses cunning and deception to catch his opponents off-guard. He's also a master of Kido, knowing both Hadō and Bakudō spells, being able to perfectly use Hadō #99 without an incantation. His knowledge of Kido goes so far that he's able to create his own spells.

Weaknesses: His sealing technique requires the target to be weakened for it to take full effect.

Shitonegaeshi: A pinning technique which subdues an opponent and immobilizes them on the ground using coercion alone, with Urahara suspending the tip of his cane just millimeters from their face after he has struck them down.

Shunpo: A Shinigami movement technique which allows the user to move faster than the eye can follow As speed is the main factor of the technique, the method is best characterized by how fast one can get from point A to point B in the least amount of steps.

Sealed: Urahara's Zanpakuto is unique insofar as it takes the form of a shikomizue, or cane sword, in its sealed form. In said cane form, Urahara can forcibly expel souls from their physical body via the magic insignia on the base of it

Bankai - Kannonbaraki Benihime Aratame: Urahara's Bankai takes the form of a giant woman with dark, braided hair arranged in loops on her head and mannequin-like arm and wears a revealing robe. 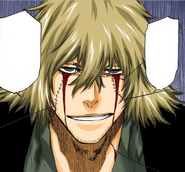 Kidō: Spells cast by Shinigami with strong enough Reiryoku and Reiryoku control. Kidō is divided into mainly three categories: Hadō for attacks, Bakudō for battle support and Kaidō for healing. The spells are ranking from 1-99 with 1 being the weaker and easier spells to cast and 99 being the most powerful and difficult to cast. Skilled users can cast Kidō without the need of an incantation; however, casting without incantation does reduce the Kidō's effectiveness less than a third of its full potential

Kyūjūrokkei Kakafūmetsu: An original spell, it impales the target from the inside out with cross-shaped pillars of light before solidifying and sealing the target within a vaguely star-shaped barrier.