All Fiction Battles Wiki
Register
Don't have an account?
Sign In
Advertisement
in: Characters, Bleach, Male Characters,
and 29 more 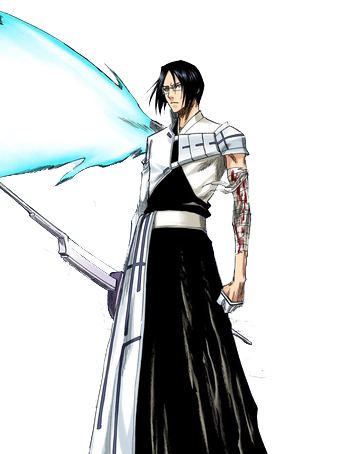 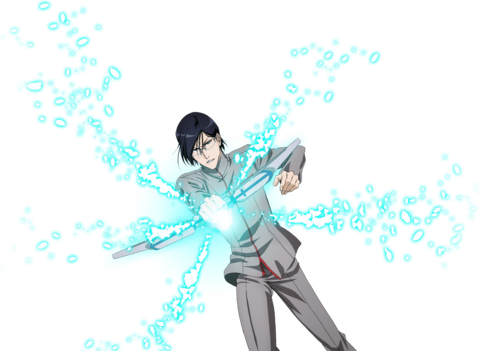 Uryū Ishida (石田 雨竜, Ishida Uryū) is a Gemischt Quincy residing in Karakura Town. He is a Doctor at Karakura Hospital, and a friend of Ichigo Kurosaki. He is a former member of the Wandenreich with the designation "A" - "Antithesis", one of Yhwach's Schutzstaffel (親衛隊 (シュッツシュタッフェル), Shuttsushutafferu; German for "Protective Echelon", Japanese for "Elite/Imperial Guards"), and his future successor

Powers and Abilities: Superhuman Physical Characteristics, Genius Intelligence, Master Archer, Expert Swordsman, Expert Hand-to-Hand Combatant, Pseudo-flight, Reishi Manipulation (Can forcibly manipulate the particles that make up spiritual beings and objects such as those in Soul Society), Statistics Amplification, Absorption and limited Matter Manipulation (Via Letzt Stil), Spiritual Awareness, Hirenkyaku Expert (Speed enhancement technique), Soul Manipulation (All Quincy can destroy souls), Non-Physical Interaction (Can harm and interact with intangible spirits and objects), Resistance to Soul Manipulation, Extrasensory Perception and Paralysis Inducement (Ransotengai allows Quincy to freely manipulate their bodies using spirit energy if their bodies would be inflicted with great physical harm or paralysis), Power Absorption and Life Manipulation (Is the only Quincy to not only survive Auswählen, but also retain all of his powers. Auswahlen kills and takes the powers of the target) | All previous minus Letzt Stil, Durability Negation, Energy Absorption and Limited Matter Manipulation with Seele Schneider | All previous on a much higher degree, Durability Negation, Attack Reflection and very limited Causality Manipulation with The Antithesis (Can swap the states of two designated targets; such as when he swapped his own severely injured state with Jugram Haschwalth's fully healthy state), Absolute Zero via Blut Vene (Due to being more powerful than As Nodt he should be able to replicate the same level of resistance As showed to Rukia Kuchiki's shikai)

Attack Potency: Unknown, possibly Mountain level (Damaged Mayuri's hand), higher with Letzt Stil (Destroyed Mayuri's arm), Mountain level+ with 3 times stronger arrows (One-shotted his Bankai and made a huge hole in his body) | Island level (Trained and regain his powers with Ryūken's help, defeated Cirucci Sanderwicci a Privaron Espada who should be comparable to Dordoni another Privaron Espada who was able to fight Post-Visored Training Ichigo, severely damaged Szayelaporro with Sprenger, one of his arrows managed to pierce Yammy's shoulder, should not be weaker than Chad) | Multi-Continent level (Fought on par with Jugram, Quilge said that Uryu shouldn't be weaker than himself). The Antithesis ignores conventional durability and reflects damage inflicted on Uryū

Durability: Unknown, possibly Mountain level Tanked a slash and stab from Mayuri) | Island level (Took attacks from Cirucci) | Multi-Continent level (Was able to take Jugram's attacks so that he could use his Antithesis, also survived Jugram's The Balance powers which doubled the damage dealt back to him)

Stamina: Very high, as he can fight even when wounded seriously.

Intelligence: Genius. Uryū is well-trained in both body and mind, having substantial athletic abilities and a genius intellect. He uses his intelligence to find weak points in his opponents, even overcoming the disadvantages he has through thinking on his feet. Due to keeping his physical abilities at their peak, Uryū can easily hold out against all but the most resilient opponents during a battle. He can deduce Ichigo's spiritual level, that Ichigo acquired his Shinigami powers in mid-May and Rukia Kuchiki's real identity.

Antithesis: Uryū's Schrift allows him to reverses events that already taken place between two designated targets. Such as switching the damage done to himself with Haschwalth, thus leaving Haschwalth with his injuries and Uryū with Haschwalth's injuries.

Hirenkyaku: Essentially the Quincy version of the Shinigami Shunpo and Arrancar Sonido. The Quincy creates platforms of Reishi under their feet to swiftly move around the battlefield.

Ransōtengai: An advanced Quincy technique created for injured/old Quincy to control their limbs with strings of Reishi like a puppet. Broken bones and severed tendons mean nothing to this as the strings will control the limbs until the body/limb is destroyed.

Sklaveri: Vollständig's basic Reishi Absorption ability pushed to the absolute limit. This allows the user to absorb the Reishi that composes spiritual and living beings, an absolute subordination of Reishi. Destroying the Stern Ritter's Halo is the only way to stop it.

Heizen: Ishida uses Heizen to instantly gouge and purge whatever is enclosed in the space made by the four tossed Gintō. This technique creates a transparent, rectangular beam of energy from the silver tubes which slices through the opponent. It is tremendously effective, even against Menos Grande.

Gritz: Ishida uses a film of Reishi emitted from a thrown Gintō to surround the enemy. This technique forms a man-sized pentagonal Quincy cross, which envelops its target.

Wolke: Ishida makes a Gintō to create a large blast to cushion his fall.

Sprenger: Ishida creates a pentagram seal on the ground with his Seele Schneider to trap his foes into an attack that would explode when he drops an ounce of Ginto into the pentagram

Path Control: Ishida can control a total of 3 arrows to home into his target.

Heilig Bogen: Heilig Bogen are the standard spirit weapons wielded by Quincy, made out of Reishi and Reiatsu. Although originally in the shapes of bows that fire Heilig Pfeil, many a Quincy switch up their Heilig Bogen to be crossbows, sniper rifles, handguns, and even gatling guns.

Licht Regen: Uryū charges the reishi in his bow to fire countless amounts of arrows upon his foes.

Kojaku: Uryū's first bow seen through the first arc is Kojaku. He's able to utilize a stronger version of it in the final arc.

Ginrei Kojaku: Uryū's new bow after regaining his lost powers, it's used in the third arc to the beginning of the final arc.

Heilig Pfeil: Uryū can gather Reishi from his surroundings and shape it into arrows, which he can fire up to a total of 1,200 arrows at once.

Reishi Shield: Uryū can use Ginrei Kojaku as a temporary shield to block some attacks.