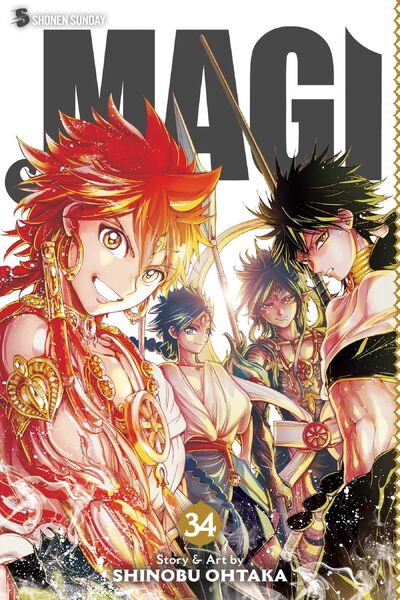 Yes, it is finally here. After being omniscient in magi, I will finally present the blog that will explain the cosmology of Magi and its other aspects.

The cosmology of Magi goes pretty high and it's one powerful verse. In this blog, I will explain how powerful the verse is.

In Magi, there exist multiple "worlds". As Aladdin explain each of these "worlds" have their own space and time, and such worlds exist in great numbers

So in conclusion, there exist multiple worlds and within these worlds which have different space and time exists multiple dimensions.

Now here comes the most confusing part of the entire thing, the existance of higher dimenions and Gods. It has been mentioned many times in magi that there are countless Higher worlds and each of these worlds have their own gods. Ugo explains there are multiple God layers.

And now sinbad (so does aladdin, david and Ugo) explains there are Countless/infinite Higher worlds and They have their own HD Gods

As primeval dragon explanis there always exist an higher entity seeing the lower life forms fleeting away to nothing, Higher entity to even god and it goes on

As The Gods like Ugo and Solomon views Aladdin's Multiverse as insignificant as fiction and transcends worlds created by David-Il-Irrah and Ugo displays the level of transcendence against Sinbad and Aladdin's Multiverse, viewing the whole thing as fiction. To put it in his words in comparison to him Sinbad is merely "a Character of the novel" and he is "the author" (of that novel). He even goes as far as to call himself "omnipotent" in comparison to Aladdin's World. Beacuse of this the Gods and Higher Worlds have an R-F difference aswell showing as the whole thing is truly an HDE and Higher worlds

So in an grand conclusion, there exist Nnumerious worlds and these worlds have their own countless dimenisons and on top of that there exist countless/infinite higher dimenions. Furthermore, each having their own gods. This should give magi verse 1-B to likely high 1-B rating.