All Fiction Battles Wiki
Register
Don't have an account?
Sign In
Advertisement
in: Blog posts, Anima: Beyond Fantasy, Cosmology Blogs 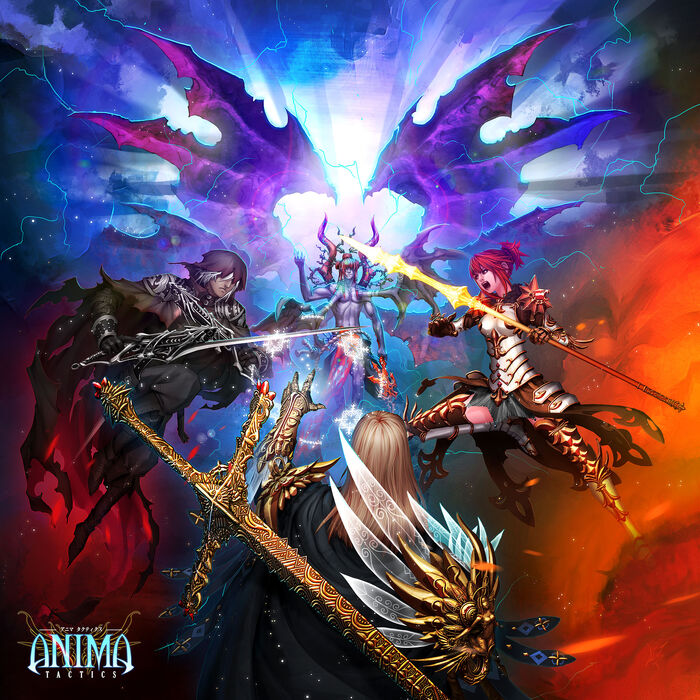 Been reading Anima, so why not make a blog for it. This will cover its cosmology and terminology, as well as some stuff regarding resistances.

Simply put, creation is composed of more than one timeline.

All in all, the cosmology has around 6 universes (2-C) and sits around 1-A with the Soul Flux (Due to its platonic implications and giving birth/holding every possible Type 2 concept within itself). Due to the soul being the concept of existence in Anima (and vice-versa), this also grants most creatures: Unconventional Resistance to Soul Manipulation and Conceptual Manipulation (Type 2), as the opponent would need to target both the concept and the soul to destroy it.

All cultures have had their own theories about the nature and origin of magic, some even conflicting with each other. Some people considered it a gift given to mortals by the gods, others concluded that it was a force extracted from the souls of the dead, and once there was even speculation that it was the power of dreams incarnate.

But it's not that complicated. Magic in Anima just refers to the spiritual energy that encompasses and influences all aspects of creation, which includes both the Material World and the Soul Flux. Depending on the level, this results in the user being able to alter reality, laws, and concepts with their mere thoughts if they so desire. 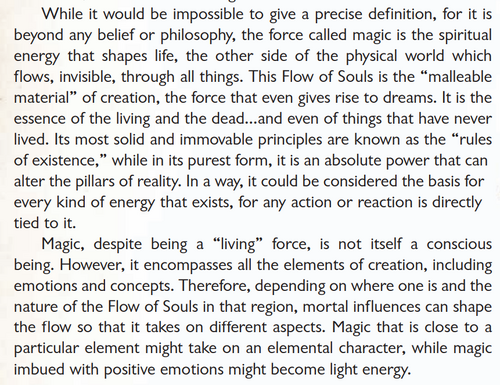 Every living being is at once both a source of magic and a beacon for ambient magic. Each soul not only generates mystical energy, but also attracts it from the environment, feeding on that energy and growing stronger. This leads to a chain reaction: the stronger a person is at magic, the more energy is attracted to him. However, although magic thus fills every person, not everyone is able to use it. From the beginning of history, only a few exceptional individuals have had the ability to control these forces that for others are beyond imagination. These people, whether they feel blessed or cursed by their power, have the Gift. The Gift is the means by which magic manifests in a soul as an active force, allowing the individual to intervene directly in the flow of mystical energy. Not only are Gifted people capable of perceiving the supernatural, but they can also use their powers to reshape reality with spells or even thoughts.

The force called Ki is the energy that is present in any form of life, a kind of vital current that flows through everything. Throughout history, it has had a multitude of names, like Aether, Ruah, or Ka, and dozens of philosophical and scientific theories have tried to explain its nature. In spite of everything, the only fact that can be affirmed with absolute certainty is that Ki is born of the union between a spirit and a physical body, hatched of the spark that springs forth when the material world and the flow of souls intersect.

Although everything that exists has a spirit, Ki only exists in beings who are properly alive, because they are the only ones who completely fuse their body and soul. 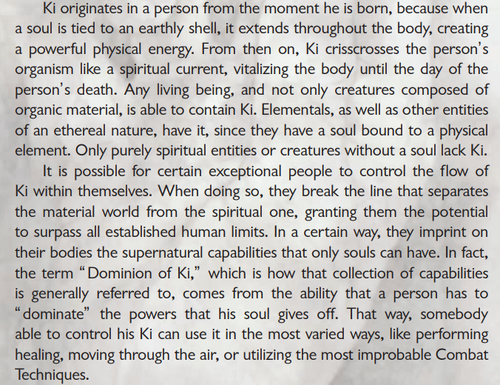 Since Ki is directly tied to the soul and its workings, entities such as undeads, golems, or soulless beings, cannot use Ki. However, while such beings cannot use Ki, they have their own form of technique which is considered as the Ki counterpart, called Nemesis.

As we mentioned above, while soulles beings and undead creatures cannot use Ki per se, they can use some form of "Dark Ki" or Shadow Ki", called Nemesis.

The nature of Nemesis is an enigma unto itself. Although there are dozens of philosophical theories that, in some shape or form, approach the true origin of Ki, there is not a single one that dares to assert for sure the same of Nemesis. For that reason, even for the few occultists or supernatural investigators who know something about it, its origin and function is an unsolvable mystery.

What we do know, is that Nemesis is commonly used to conjure abilities related to the shadows, void, erasure, nothingness and nonexistence, an absolute nothing "beyond even the emptiness". 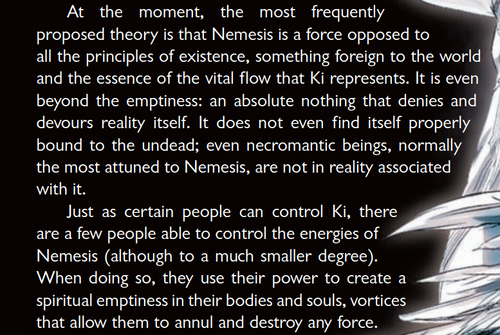 Users of Nemesis becomes completely nonexistent in reality. This emptiness is the reason why the use of Ki and Nemesis are considered opposite principles: whereas the first depends on balance and synchronization between body and mind, the other completely breaks the ties of the soul and spirit from any earthly form.

As such, due to basic usage of Nemesis turning the body and soul (the latter being the concept of existence according to the nature of the Soul Flux) into pure nonexistence beyond even the emptiness, users of Nemesis gets the following abilities: Void Manipulation, Existence Erasure & Nonexistent Physiology (Type 2)

Of course, there are more applications for those who can use Nemesis abilities, but those are not the standard and it will vary from individual to invidividual.

The Gnosis represents the capability of someone in how much it can influence the spiritual world with their thoughts. In some ways, it indicates the power of their supernatural presence and the innate ability they posses to change the natural rules. The greater the Gnosis of an individual, artifact or entity, the greater the relevance his actions will have in the soul flux and, at the same time, the less it will be influenced by it. In reality, this ability has little to do with abilities or knowledge a person possesses. It is perfectly possible that there are first level entities who have Gnosis so great that their wishes alter the order of reality. 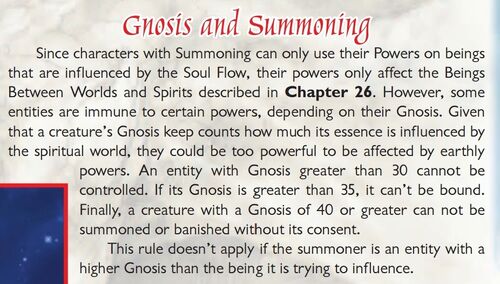 As a general rule, all supernatural creatures possesses a high amount of Gnosis, given that they are beings whose existence turns out to be artificial to the world. Nevertheless, there are also natural individuals provided with an uncommon potential for members of their species.

The Gnosis values vary from 0 to 50. Naturally, each level includes the Advantages offered by the previous ones. For example, a being with 35 Gnosis will have all the powers from someone with a 25 or 30 Gnosis.

Natura is the term that is used to define the ordinary Gnosis of a natural race. It is the standard value that its members have, the existential value possessed by all the members of a species by the mere fact of belonging to it. In Gaïa, each race has normal Gnostic value or Natura, that indicates how attuned they are to supernatural forces. Below is a brief reference to its base values.

Natura values varies from 0 to 20. And in the same way of Gnosis, they grant special/unique Advantages depending on the level.

It should be noted that Gnosis and Natura are completely independent of the character’s level. It is perfectly feasible that an individual with a Gnosis much higher than its Natura has a very low level; it’s the implications and significance of his actions that really make the difference.

Natura 0: These are normal individuals, the most common members of their respective races, whose actions will never have true repercussions; they are people who live simple and ordinary lives, without the slightest importance. This value is not suitable for player characters.

Natura +5: These are people whose existence stands out in some way among others; their lives will be full of important events and important developments. This level of Natura grants no additional benefit beyond role-playing ones.

Natura +10: Those with this level of Natura are individuals of transcendental importance. Wherever they go, significant events occur (or rather, history pulls them to the places where they will happen), and what normal people consider inconceivable will be commonplace for them.

Natura +15: People with this Natura have the ability to shape fate itself. They are individuals with the potential for extraordinary actions, whose impact will affect the entire world in varying degrees. For better or worse, their actions will change the lives of thousands of people.

Natura +20: This is the maximum degree by which a person can exceed his base racial Natura. When an individual’s Gnosis is twenty points higher than their ethnic group, they do not live within history: history revolves around them. From the moment in which he is born, his actions will have huge significance for existence, and with them will shape the destiny of the world. As insignificant as they may seem, each of his decisions will have enormous consequence capable of changing history and the lives of everyone in Gaïa.

In Anima, most creatures have certain atributes displayed on their paper sheets, those being PhR (Physical Resistance), DR (Disease Resistance), VR (Venom Resistance), MR (Magic Resistance), PsR (Psychic Resistance). Those atributtes represent the capability of the character to avoid any harmful effect towards certain abilities. While you can get a specific set of power/resistances through the number of Gnosis, these resistances applies in a more so general case where the Gnosis stats doesn't have much relevance over them.