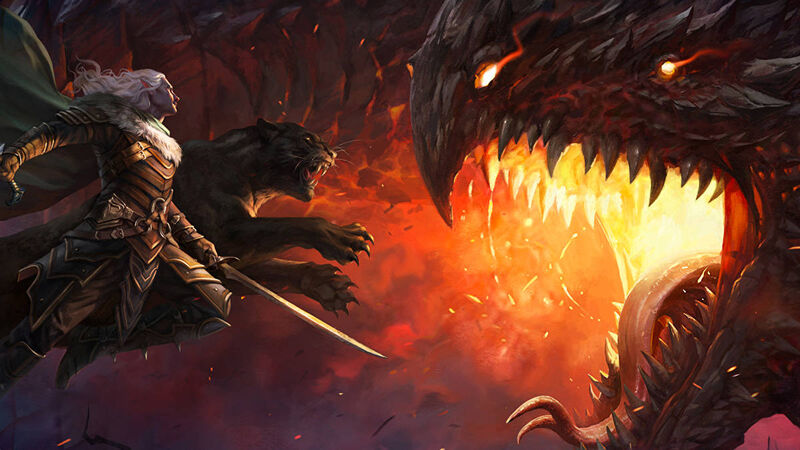 This blog will cover D&D's tiering and a few more terms. Consider a WIP for the time being.

The Prime Material plane was the plane in which Toril and the surrounding cosmos existed.

The Ethereal Plane was a plane full of ghosts, monsters, and phases.

The Abyss was the birth place of the demons, a chaotic evil plane of infinite size.

The Far Realm was a place of madness beyond the planes of the standard DnD cosmology. This maddening realm was feared for its power to twist unfortunate visitors into gruesome monsters, and it was from here that aberrations came. A realm beyond dimensions, space, time, and concepts.

Demons were the most widespread type of fiends. They were chaotic evil by nature, and were native to the Abyss. Their abilities include:

Demon lords, also known as Abyssal lords, were archfiends who gained great power and established a position of preeminence among demonkind. Over millennia, these demons had amassed tremendous power and authority over their domain.

Dragons (or wyrms) were very powerful magical creatures and an ancient, winged reptilian race. They are known and feared for their size, physical prowess, and magical abilities. The oldest dragons are among the most powerful creatures in the world. Most dragons are identified by the color of their scales. There were several types of dragons, the most common of which were chromatic and metallic, which were evil and good respectively. Standard dragon abilities include:

A deity is a divine being of great power. Most deities, particularly those that were of intermediate ranks, control aspects of mortal affairs, referred to as the god's portfolio. Some gods are more powerful than others. They are divided into several different statures: Demigods, Lesser, Intermediate, Greater, and Overdeity. All Gods possess innate abilities and powers, which are outlined below:

In D&D, all characters can resist spells to certain degrees.

Saves are, in essence, a set of statistics held by every single character in Dungeons and Dragons, ranging from the typical housecat and even simple insects, to powerful demons, angels, and the titular dragons, to even stranger beings such as the Aboleth Sovereignity or the strange beholder species.

The Save system is based around three statistics (as set by 3rd Edition D&D). Fortitude (listed as Fort in short hand), Reflex, and Will.

Fortitude saves are those that allow you to resist certain effects by right of sheer strength of body- common examples include sickness and poison, even magical examples of this. On a more extreme example, this allows you fully resist instant-death spells.

Will saves are those that allow you to resist certain effects by right of sheer force of will. This includes more metaphysical attacks of the verse, such as attempts to mind control, force subjects into a temporal stasis, or even alter their fates.

Reflex saves are not considered resistances in this context- as it is merely an act of dodging, it doesn't offer any actual resistances. It can be used for speed feats (and in fact is currently the basis of the speed feats of the verse, through dodging explosions and lightning) but not really much else.

Now, what would Fortitude, Will and Reflex include power-wise? Just a few abilities: