All Fiction Battles Wiki
Register
Don't have an account?
Sign In
Advertisement
in: Tier 1, Reality Warpers, Concept Users,
and 50 more 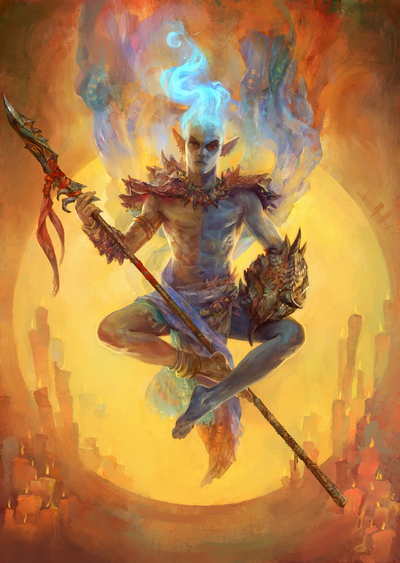 Vivec (also spelled Vivek), or Vehk, Warrior-Poet deity of the Dunmer and "vi" in the Almsivi, was the Guardian God-King of the holy land of Vvanderfell, and ever-vigilant protector from the dark gods of the Red Mountain, the gate to hell. Though some aspects of his past are blurred by time and questions surround some of his more controversial choices, Vivec has always represented the spirit and duality of the Dunmer people, which is reflected in his half-Dunmer, half-Chimer appearance. For hundreds if not thousands of years, he mostly resided at the pinnacle of his Palace in Vivec, his capital, which was visited by hundreds of pilgrims and tourists daily. He honorably guided and protected the Dunmer for thousands of years until his loss of divinity and disappearance near the end of the Third Era, a sacrifice he not only accepted, but helped to bring about. Following his disappearance and the collapse of the Tribunal Temple, he was renamed Saint Vivec by the New Temple and declared a member of the False Tribunal.

Vivec is worshipped by the Dunmer as a symbol of "mastery," as well as "duality" given his Chimer/Dunmer complexion, hermaphroditic appearance, and sinister nature hidden behind his benevolence due to his relations to Mephala.

In his early life, before becoming a god, Vivec was an advisor to Indoril Nerevar along with the other members of the Tribunal. Vivec was known to be very public before his extraordinary loss of power, which began with the revival of Dagoth Ur. Because of this, Vivec has gained the reputation of being the most popular deity of the Tribunal. One of Vivec's main duties is to guard the people of Vvanderfell from the evils of Red Mountain.

Vivec disappeared around the end of the Third Era during the Oblivion Criss under mysterious circumstances. Though magical inventions were made to support Baar Dau in Vivec's absence. After the disappearance of Vivec and the reinstatement of the worship of the old Dunmeri pantheon, Azura, Boethiah, and Mephala, by the New Temple, Vivec was henceforth known as "Saint Vivec."

Gender: Hermaphrodite/Genderfluid | Inapplicable (As a CHIM user transcends all possible interactions of the concept of “Gender”)

Age: Over 3,500 Years Old as of 3E.427 | Inapplicable (As a CHIM user, transcends all Et’Ada, including the Dragon God of Time Akatosh)

Classification: Warrior-Poet God-King of Morrowind, The Daughter-Son of the ALMSIVI, The Martial Axiom, The Magic Hermaphrodite, The Sex-Death of Language, Ruling King; Formerly a Mortal Chimer

Attack Potency: Low Macroverse level (Completely transcendent over the concept of linear time, existing both outside and beyond it. Comparable to The Nerevarine and Dagoth Ur, the former of which can defeat Hircine's aspects. Should be above the avatar of Barbas, who Clavicus Vile stated was comparable in power to The Dovahkiin) | High Hyperverse level (Attested to having defeated the true form of the Daedric Prince Mehrunes Dagon in single combat. Comparable to Sotha Sil, who created the Clockwork City, an infinitely-layered construct that replicates the entire Multiverse of Mundus, and who with help from Almalexia defeated Mehrunes Dagon, destroying him across all of time simultaneously, an event which shook the All-Axle and made the Earthbones which define the laws of Mundus tremble) | Ascendent level+, likely High Ascendent level (Ascended to the state of CHIM, CHIM users exist on a “Non-Spatial realm” beyond the Void of Oblivion, which contains infinite higher dimensions. CHIM means, transcending all of existence and its boundaries, seeing the Tower of Wheels "sideways", the Eternal I, this would mean, seeing an Infinite-Dimensional, Infinite-layered construct, such as the Aurbis, and the Tower, by realizing that all of existence is merely the Dream of the Godhead. Once ascended to CHIM, Vivec is freed from all restrictions and limitations. Transcending the Infinite Telescope of Wheels, each Wheel preceding the creation of Space and Time by Lorkhan and Akatosh, representing higher infinities which lacks completely from the notions of “Time angles”, referring to Spatial-Temporal Dimensions. And is able to control at will the Dream of the Godhead, and it’s layers, including the entire Aurbis and the Telescope of Wheels)

Speed: Immeasurable (Even in a vastly weakened state, Vivec is completely transcendent over the concept of linear time, existing both outside and beyond it. Perceives the past, present and future simultaneously. Took the Nerevarine outside of time, and is capable of leaving time altogether at will) | Irrelevant (Fully Transcendent over Dualism and the Concepts of Space and Time across the entirety of existence), Omnipresent across the Telescope of Wheels (Upon perceiving the Wheels "sideways" as the Tower, The Eternal I, Vivec became one with the whole of the Tower as Individuality is illusory and all is merely the Dream of the Godhead, but was able to maintain his sense of Self through CHIM, simultaneously existing as one with everything but also as an Individual Being)

Durability: Low Macroverse level (Can endure attacks from beings of comparable or superior power such as Dagoth Ur and The Nerevarine) | High Hyperverse level (Can trade blows with the Daedric Prince Mehrunes Dagon) | Ascendent level+, likely High 1-A

Range: Hundreds of Miles with Most Abilities (His reach extends across all of Morrowind), At least Low Macroversal with Magic and Teleportation (Can traverse through Mundus and into Oblivion at will) | High Hyperversal (Can freely traverse through Oblivion, an infinite-dimensional void which encompasses all possibility and contains an endless number of individual daedric realms) | Meta-Ascendental (Can leave the Tower of Wheels altogether, and go beyond the Dream of the Godhead itself in order to access the Dreamsleeve, non-space that lies beneath everything as the deepest level of existence before the state of Amaranth. Claimed to be capable of completely erasing individuals from the "Thought-Realm of God" itself)

Intelligence: Incredibly Intelligent, borderline Nigh-Omniscient. As a God, Vivec holds vast cosmic awareness and a deep understanding over the nature of the Aurbis as a whole, as well as its underlying metaphysics, being the most spiritually attuned of the ALMSIVI, and the one to comprehend the purpose of existence the most. Exists beyond Time across the Mundus and perceives it non-linearly, having been known of Indoril Nerevar's rebirth and his potential death at the Nerevarine's hand for thousands of years before it ever took place. | Same as before | Nigh-Omniscient (Able to fully understand the nature of the Tower in its totality, the Dream of The Godhead and it’s boundaries, perceiving that everyone, from mortals to even Gods, are nothing more than illusory constructs in the mind of an indifferent God)

Weaknesses: Separated from his power source, the Heart of Lorkhan, and will continually grow weaker as a result | Needs the Heart of Lorkhan to refuel his Divine Powers from time to time | CHIM is a state which one taps into, rather than a permanent transformation, and the powers of CHIM cannot be abused as one risks ZERO-Sum by wielding them.

Feats: Transcendent over the concept of linear time, existing both outside and beyond it, attested to having defeated the true form of the Daedric Prince Mehrunes Dagon in single combat, attained the state of CHIM, transcending all of existence and its boundaries, seeing the Tower of Wheel "sideways", fought The Numidium with the help of Talos and The Nerevarine, reached the Dreamsleeve, the final level of the dream of the Godhead, before the state of Amaranth, and contains all possible idea's in the form of information