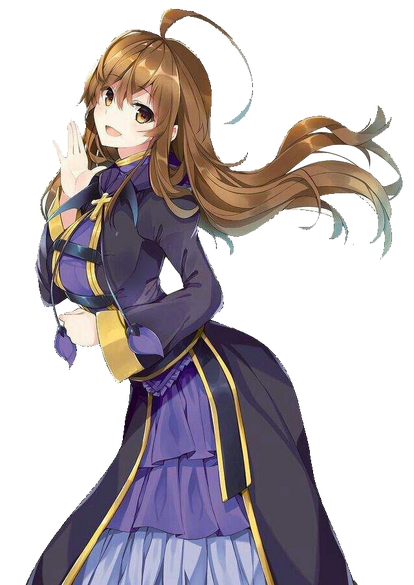 Wiz is an important character in the KonoSuba series. She is a lich who is the owner of a "famous" Magic Item Shop in Axel and used to be referred to as the Ice Witch when she was an adventurer fighting against the Demon King.

She now runs a magical item store filled with items either too expensive and high level for the rookie town or items with significant flaws (usually supplied by Hyoizaburoo). Before meeting Aqua, she helped guide souls in poor cemeteries to the afterlife.

Powers and Abilities: Superhuman Physical Characteristics, Immortality (Types 1, 3, and 7; Undeads live forever, She can regenerate herself, Technically she cannot die because she is already dead), Regeneration (High; able to come back after being turned into carbon atoms), Self-Sustenance (Types 1 and 3), Power Mimicry, Life, Mana and Soul Absorption (unlike adventurers, she can absorb souls completely and turn them into XP and she's able to drain life and mana via drain touch), Non-Physical Interaction (she can interact with souls), Soul Manipulation (She can destroy spirits and ghosts, and is also capable of manipulating souls, taking them to the afterlife or bringing them back.), Durability Negation, Transformation (Via the Lich ritual, though this likely can't be done to others by force), Necromancy (Able to raise the dead as zombies), Magic, Staff Mastery, Explosion Manipulation (Via Explosion), Elemental Manipulation, (Earth, Fire, Water, Air, Ice, Light, Electricity, Heat, Magma and Plant via basic, intermediate and advanced magic), Possible Darkness Manipulation, Energy Manipulation and Projection ( can make energy blasts), Chain Manipulation, Weather Manipulation (Able to manipulate weather to some extent), Life Manipulation, Death Manipulation (Has instant kill move that works by thinking or saying a single word), Sealing (Can encase enemies in a block of ice, also has an unseen permanent sealing method that works on targets far above the user), Empathic Manipulation, Statistics Amplification (Able to amplify her magic abilities by fastcasting and various items), Holy Manipulation, Forcefield Creation (Can create a barrier capable of protecting the castle from the demon king), Extrasensory Perception (Can sense magic and souls), Summoning (Can summon undead and ghosts), Invisibility (Via Light of Refraction), Fear Aura, Teleportation (Can utilize teleportation magic in herself and allies), Status Effect Inducement (Hold her hand can induce the other person different states such as poison, paralysis or sleep if the person does not have resistance to these), Power Nullification (Can nullify any abilities that are about to be used or have already been cast, her ice and status effects also prevents targets from using abilities), Sleep Manipulation, Poison Manipulation, Paralysis Inducement, Curse Manipulation (can curse enemies), Petrification (She is able to cast a spell and curse that turns people to stone), Statistics Reduction (She is able to steal his opponent's level with Drain Touch), Invulnerability to physical attacks, Resistance to Fire Manipulation (Resisted Duke's fire blasts), Existence Erasure (Capable to resist Aqua's Erasure via Purification), BFR (Demon Generals are resistant to forced teleportation), Soul Manipulation (Able to no-sell priests' ability to forcefully sends her soul to heaven and the item which is reducing her soul to mana no longer works to her the moment she became a lich), Status Effect Inducement, Mind Manipulation (Resisted a vampire trying to hypnotize her), Empathic Manipulation (Lich can no-sell status effects, as when Succubus tried to cast love status to her), Possession (Vanir's possession doesn't work on her)

Attack Potency: Small Building level (Wiz stormed into the Demon King's Castle on her own. She tore down the barrier and quickly defeated Hans and Silvia before beating Beldia into submission), Small Town Level with Explosion (Her Explosion is equal to Megumin one)

Stamina: Limitless (undeads do not get tired), she is able to use explosive and advanced magic without getting tired.

Intelligence: Genius in Combat, She is very intelligent in combat and always finds the best way to be victorious. However, she is quite ditzy.

Instantly appears inside the target and causes them to spontaneously combust, those affected by this appear to have flames pouring out of them.

Summons a pit of lava under the target.

Used to trap targets in ice.

Can be applied using spells or on contact. The spells are instant and can be AoE while contact is random.

Curses have an extremely wide range of effects depending on the user's wishes. These can be completely petty (Making the target extremely lethargic, instantly warming up all cold drinks for the rest of their life, making sure their toilets never flush etc.), somewhat dangerous (Making plants/fungus grow out of the target, killing microorganisms inside them, putting them to sleep, paralyzing them) or lethal (Making body parts disappear or outright killing the target)

Absorbs strength and stamina from a target, which in turn can be transferred to somebody else.

Physical attacks are almost completely ineffective against her unless enchanted weapons are used.

Petrifies all enemies in a chosen location.

Wiz is an incredibly powerful mage who can use a vast array of high level spells and is able to cast many of them without chanting. She has an incredibly high mana reserve as she can still move about and cast additional spells after casting Explosion Magic.

A spell that detects any enemies within a certain radius in a similar way to the "Detect Enemy" skill. Trap Search does the exact same thing, except it detects traps instead of enemies.

Grants the user resistance against fire based attacks.

Wiz learns unspecified anti-devil curses in anticipation for her duel with Vanir.

Wiz has been shown to use basic magic. Due to her high magical power, her use of it far eclipses the like of Kazuma.

Creates a wave of low temperature that can freeze water.

Wiz has been shown to use intermediate magic on occasion.

Puts the opponent to sleep.

As a powerful archwizard, Wiz has access to advanced magic, which she uses to high effectiveness.

Creates a purple "bottomless" marsh that makes anyone who comes into contact with it sink.

Creates a large blaze and incinerates the surrounding area.

An advanced spell that generates a magical based blade capable of cutting almost anything.

A more powerful version of Lightning; generates a powerful bolt of magic. Wiz is capable of killing a dragon in one hit with this ability.

An ability allows the user to encase victims in ice.

A more powerful version of Crystal Prison and one of Wiz's most used spells.

Teleport is an high level spell which allows Wiz to teleport objects or people to "marked" locations, which are places she has already visited. Wiz can leave behind additional markings in places she wants to visit later, with a maximum of 3. Wiz can also use a random teleport, removing the need of a marker, but in turn transporting the item to a random location in the world.

Explosion is an advanced spell and is unrivaled in terms of pure destructive power. However, it consumes so much mana that most spell casters would find their mana completely drained after using it once. Wiz is an exception to this rule because of her incredibly high mana levels.