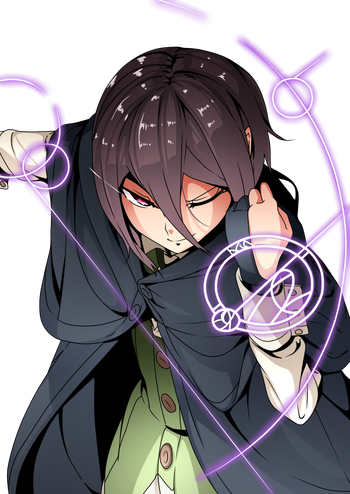 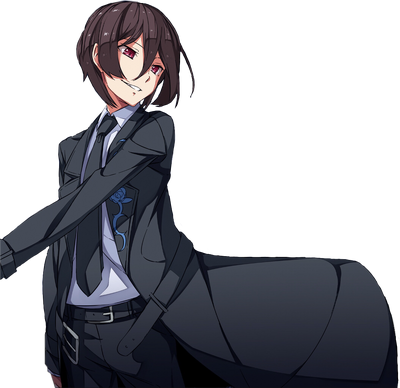 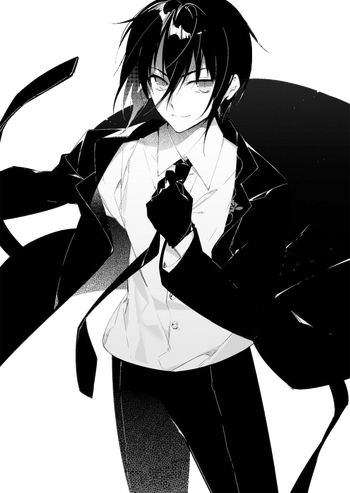 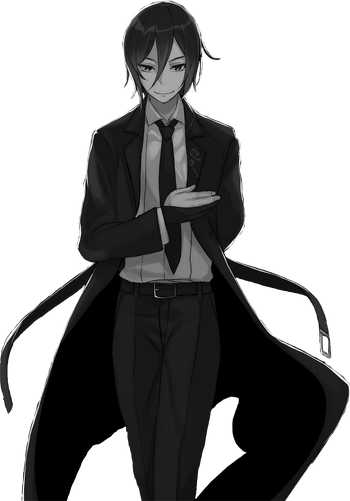 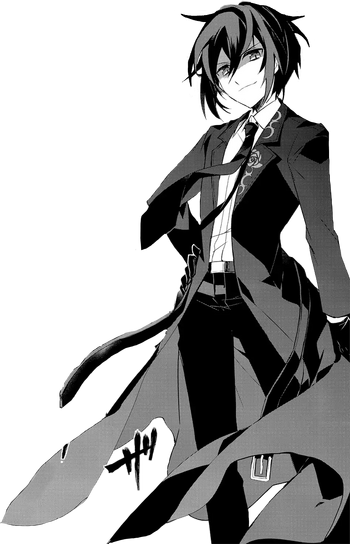 Yakagi Suimei (Westernized as Suimei Yakagi; 八鍵水明) is the main protagonist of Isekai no Mahou wa Okureteru, he is a modern magician who is a member of the magician society with the hopes of reaching the Akashic Records and thus becoming omnipotent in order to become capable of saving everyone in the world, including those who cannot be saved.

While walking with his friends he gets caught off guard by a divine summoning spell with the purpose of summoning his friend, Reiji, as a hero and ends up getting pulled along with his other friend. Trapped in another world with no way back and refusing to fight off the other world's problems as they basically kidnapped him, he ventures into a new world of magic and swords on his own in hopes of finding his way back but in the process ends up getting caught in various unexpected events.

Magic (To even touch upon a mystery one must have a certain degree of resistance towards it; his body which has been reinforced by the mysteries has become resistant to lower-class mysteries), Conceptual Manipulation (Type 1; Magic and Magicka are conceptual in nature rather than following the conventional notions of the physical world. The Elements that mages use in the other world, are just 1 example of a mystical law), Poison Manipulation (He is unaffected by the exposure to mercury), Curse Manipulation, Mind Manipulation (Consciousness is a part of the astral body, as such it is protected by Suimei's charm meant to protect higher-dimensional beings; he is naturally resistant to alterations of the psyche), Body Puppetry (He stood perfectly normal against a God who compelled everyone to bow before it with his presence), Aura (Magicians aura's counteract that of others as allowing another person to have control of the area would be a fatal advantage), Empathic Manipulation, Possession (Divinities can only preform half-possession on Suimei which allows him to channel their power), Pain Manipulation (He has a significant pain tolerance a being capable of keeping his concentration and calm as his astral body was being destroyed), Fear Manipulation (Despite directly looking at Apparitions on multiple occasions he was not really affected by their nature. Normally their physical aspect which is received as information by the eyes is passed to the brain triggers an indescribable fear on the viewer. Also not affected by Rajas' or Liliana's aura), Heat Manipulation (Unaffected by Rajas' demon army using their psychic cold on him simultaneously, survived being within heat that melted the ground, and unaffected by cold temperatures), Corrosion Inducement, Acid Manipulation (Unaffected by Liliana's acidic aura), Death Manipulation (Was fine in the presence of the sinful figure, which kills any normal person), Madness Manipulation (He was fine on the presence of the sinful figure which drives people insane with its presence), Magicians are not affected by concealment magicka which causes others to subconsciously ignore the user's existence even if they see them, Sense Manipulation (Unaffected by Liliana's zone of darkness), Energy Absorption (The anti-magicka measures of the ancient golem of sucking in all the mana in the surroundings resulted ineffective against him), Sleep Manipulation (Unaffected by the effects of the dark veil set up by the librarian), Law Manipulation, Power Nullification (By giving birth to devils; High-degree mysteries are not affected by rank disparity extinction; even if the laws of the world are different from the one's his magicka operates under he is capable of manifesting it), Soul Manipulation (Capable of taking attacks from apparitions which directly target the astral body; With his charm he has protection meant for divinities which are higher-dimensional beings)

Speed: FTL (Swifter than others who are capable of dodging flashes of light, when it has been shown that the elements display the true speed of the concept they are as well as if light were to have been released at below the speed of the light constant it would have caused space to be rewound. Kept up with Liliana Zandyke) | FTL (Far faster than before, capable of keeping up with Eanru who was capable of blitzing normal Suimei) | FTL (Same as his weakened base) | FTL (Same as weakened Archiatius Overload)

Stamina: Very High (Using multiple large-scale spells at the same time which huge mana consumption normally is no problem for him; Capable of using the energy present in the ley lines of the earth or the stars themselves as well as gathering aether from the air), Limitless mana supply when using Archiatius Overload (A magician's magicka furnace allows them to generate mana endlessly, generating the same amount of mana that they use upon their spells)

Range: Tens of kilometers (His mysteries can be manifested up to the sky's horizon), Inter-dimensional with Eye of Danguma (Capable of hiding celestial bodies like the moon, and revealing the true body of beings who's true bodies reside in another dimension), Multiversal+ with Abreq Ad Habra (It is a spell that erases the opponent from the phase itself and erases all bonds the opponent has with the world altogether even returning Divinities to their conceptualized forms in the astral plane) | Same as before | Hundreds of kilometers (Can dispel barriers extending hundreds of kilometers, create giant thunderstorms, gather the entire sky into his hand and harness all of the electricity of distant cities in Europe), Inter-dimensional with Eye of Danguma, Multiversal+ with Abreq Ad Habra | Same as before

Standard Equipment: Mercury which he can change into multiple mercurial weapons, gloves of discord, magician uniform, charm of protection, and a bag that is several times bigger than its apparent size.

Intelligence: Extraordinary Genius (Has extensive knowledge on various subjects such as biology, alchemy, astrology, science, mathematics, philosophy, theology, etc. At age 12 he had already mastered the fundamentals of the Kuchiba sword style which is one of the few remaining hidden sword-styles, and despite not being a master of the sword himself he is well versed enough to somewhat hold his own against masters of the sword without using magicka. Extremely versed in the mystic and combat being able to tell the origin, magnitude, and phenomena of most mystic phenomena by just by looking at it as well as accurately predicting the opponent to a level that it seems like if he was reading the future, in addition, to quickly figuring out unknown phenomena. Became one of the top researchers and enforcers of the mystic at a young age and is the mentor to Hidemary, a magnum opus even among homunculus, beings who are bona fide genius that stand atop the hierarchy of intellect of living beings and was recognized by another as a genuine genius who he could overcome to prove his worth. Stated to be a monster who resided far deeper in the abyss of the ways of magic than the sage who taught Felmenia)

: The most famous and powerful of the holy magics that brings forth the preposterous existence of a divine angel from the astral plane to eradicate demonic and divine existences. The guardian angel which it summons by taking advantage of the divinity’s feat of being forgotten is given momentary access to the world via Suimei and manifests itself as an inorganic bust of a woman behind him. The being then creates a giant thunderstorm and proceeds to pull all of the energy that is electrical in nature from even distant cities and gathers it into a singular area. Afterward it brings forth summons hundreds of thousands of supercharged lightning bolts inside the radius of a magic circle which forms a gigantic pillar, consuming everything in sight and erasing it completely from existence leaving no traces of it in the phase, destroying all the bonds of it with the world and even returning divinities to their conceptualized forms in the astral plane.

: A grand-scale star magicka categorized as a wide area expansion spell that makes use of the two magicka styles that are kabbalah numerology and astrology. Its attribute is void, modeled after the invisible and intangible power that exists in the atmosphere known as ether. It borrows the power of the stars, constellations, and the legends engraved in them by humans as well as the dormant seed of power sleeping within humans. Upon activation, a giant ultramarine circle of dazzling light covers the ground as well as the sky and within the circle, countless corresponding smaller magicka are formed which draw out the power of mana and starlight before firing down the starry sky in the form of pillars of light, like a rain of meteoric tears that blows away all sound as the thunderous roar marks their approach. Each holding enough power to individually send giant beasts of the apocalypse into oblivion. It rejects all that should not be in the world, and manifests incredible power against anything that would do the world harm. To put it simply, it is a purifying power near equal in terms of holy power

Azure Engraved Beheading: A grand-scale sky magicka categorized as a wide-area deployment and multiplex convergence spell that fuses the two magicka systems that are kabbalah numerology and weather magicka. It makes use of the void attribute as it takes everything that exists in the void of the air and makes it his power. It forms a massive dazzling azure blade that leaves a blue aurora trail identical to the clear sky. Its activation alone violently shakes the environment and destroys everything that is too brittle to survive its enormous power as it triggers a Mansfield vibration. This magicka is capable of killing conceptual existences like the apparitions in a single slash and vanishing them along denying the twilight. This magicka can also be used to enhance Suimei’s mercurial weapon in the form of “Bless Blade” as well as being capable of being fired as a sort of beam of energy.

: Suimei’s most famous defensive spell, a grand-scale a release-type fortified barrier spell. Normally barrier magicka can only be actualized by assembling all the necessary components for the requisite ritual. One has to secure the land where they were to set up the circle and place said components to delineate the boundary. Even other types of reinforcement spells, such as those that created an encampment around the caster, required a certain amount of preparation. However, Yakagi Suimei’s defensive barrier is a grand barrier modeled after the defenses of a castle, so what would normally require tremendous measures and time to prepare, and was constructed in stages that Suimei performed simultaneously and makes full use of. By building the ramparts, the walls, the towers, and all other components of a castle, each with their own effects, and establishing them in their proper place they all came together as key components of a ritual to invoke even more complex magicka, unifying into a single spell in the process allowing him to craft the entire fortress at impossible speeds. The final result is a golden fortress emanating golden light so brilliant that it left an afterimage in one’s eyes. The fortress has multiple layers of magicka circles laying on the ground, and several others rotating in the air. Physical defense, mana defense, dampening, time stagnation, spatial defenses amongst other defenses. And as his fortress, Suimei is free to enter and exit as he pleased, meaning he could launch attacks from within. The real problem comes with the fact that the fortress moves with its caster at its center. Once the barrier is up and complete, shining in all its brilliant glory, the only ones capable of piercing it are probably limited to renowned magicians and the Greed of Ten.